We are here for you to provide the important current affairs August 16 2018 which have unique updates of all daily events from all newspapers such as The Hindu, The Economic Times, PIB, Times of India, India Today, Indian Express, Business Standard, all Government official websites. Our complete current affairs helps you to get more marks in Banking, insurance, UPSC, SSC, CLAT, Railway and all other competitive Exams. “Digital Screens” launched by Ministry of Railways to spread awareness about Indian Railways Heritage
On August 16, 2018, Ministry of Railways launches “Digital Screens” to spread awareness about Indian Railways Heritage.
i. From the Independence Day on (August 15, 2018), “digital screens” has been made operational at 22 railway stations.
ii. Addirionally, QR code based posters on Railway Heritage are also being displayed at these stations.
iii. These would allow passengers to scan and view a streaming video on their mobile on Railway heritages.
iv. Dedicated heritage video walls are being installed in New Delhi and Howrah.
About ‘Digital Screens’:
i. This screens will how one to two minute-long movie clips on digital LED screens at the entrance gate of railway stations and also at different comfort areas.
ii. The short films will showcase heritage buildings, locomotives and spread awareness about heritage of Indian Railways.
iii. Few of the railway station where these have been launched are:
New Delhi, Hazrat Nizamuddin, Howrah, Sealdah, Jaipur, Agra  Cantonment, Coimbatore, Lucknow, Varanasi. i. Earlier the ceiling was : Rs 120,000 or less.
ii. This would cost the state government an additional Rs 200 crore.
iii. The state had already incurred an annual expenditure of Rs 1200 crore under the scheme in 2017.
Other Announcements:
i. A university for the girls under this scheme to pursue higher education would be built.
ii.The state education ministry would hold special training camps for the girls to provide skill trainings for jobs.
About ‘Kanyashree’:
Kanyashree was launched in 2013 to prevent early marriage of girl children of socio-economically disadvantaged families whose annual income is Rs 120,000 or less. 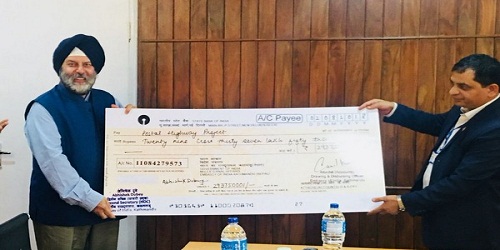 India releases funds to Nepal:
i. Indian Ambassador to Nepal Manjeev Singh Puri handed over NPR 470 million to the Secretary of Nepal’s Minister for Physical Infrastructure and Transport Madhusudan Adhikari.
ii. This amount has been released for the ongoing construction of 14 road packages under Postal Highway Project.
iii. With this payment, a total of NPR 2.35 billion has been released to Nepal out of the total grant assistance of NPR 8 billion committed by Indian Government for implementing 14 road packages.
iv. Also, on 15th August 2018, on the occasion of India’s Independence Day, Indian Ambassador to Nepal Manjeev Singh Puri handed over 30 ambulances and 6 buses to hospitals, non-profit charitable organizations and educational institutions of Nepal.
v. Indian Mission in Nepal also gifted books to 68 libraries and educational institutions in Nepal worth NPR 17 Lakhs.
vi. Manjeev Singh Puri also felicitated one Veer Nari, seven Widows, three next of kins of the deceased soldiers and one disabled ex-serviceman of Indian Armed Forces by handing over their dues worth NPR 5.35 Crore and a blanket to each.
About Nepal:
♦ Capital – Kathmandu
♦ Currency – Nepalese rupee (NPR)
♦ President – Bidhya Devi Bhandari
♦ Prime Minister – K.P. Sharma Oli 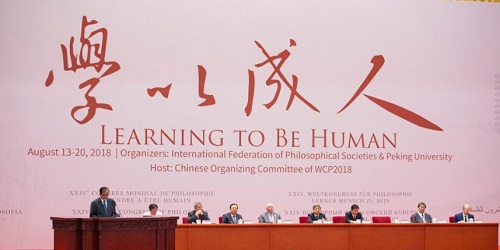 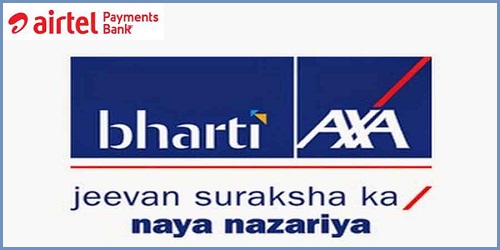 i. This aims to increase penetration of life insurance products among the underinsured masses and boost financial inclusion.
ii. IT is aimed to reach the 190 million under-insured Indians under Airtel Payments Bank.
iii. This would help to strengthen Bharti AXA Life Insurance’s presence in India.
About the team up and the product:
i. Under this, ‘Pradhan Mantri Jeevan Jyoti Bima Yojana’ (PMJJBY) would be provided by Bharti AXA Life Insurance.
ii. It will give Rs 2 lakh life insurance cover for an annual premium of Rs 330.
iii. This will be available to all existing or new Airtel Payments Bank savings bank account holders between ages 18-50.
iv. Initially PMJJBY will be available at 1 lakh Airtel Payments Bank banking points across India.
v. This would be increased to over 5 lakh banking points to have financial inclusion.
‘Pradhan Mantri Jeevan Jyoti Bima Yojana’ (PMJJBY)
Launch Year: 2015

iv. This will make consumer loans such as auto, car and home loans costlier for buyers.
v. These changes will be effective from August 16, 2018.
Background:
RBI increased repo rate, at which it lends to other banks, by 25 basis points to 6.5 percent twice within 2 months.
Andhra Bank:
♦ Headquarters: Hyderabad.
♦ Tagline: Much more to do with you in focus.

India Ratings decreases growth forecast to 7.2% from 7.4% for FY19
On August 16, 2018, according to India Ratings, growth forecast of India has been cut to 7.2% from 7.4% for FY19.
i. Reasons behind this are:
Increasing crude prices and the goverment’s decision to fix tfix the minimum support prices of all kharif crops at 1.5 times of the production cost.high level of bad loans
ii. The private final consumption expenditure to grow 7.6% in FY19 compared to 6.6% in FY18.
iii. The annual value of exports to touch USD345 billion in FY19.
iv. Average retail and wholesale inflation in FY19 to come in at 4.6% and 4.1%, respectively as against 4.3% and 3.4% forecasted earlier .
Other announcements in the report:
i. The fiscal deficit target of 3.3% would be met.
ii. Loss of revenue due to recent reduction in the Goods and Service tax rate in respect of 88 items.
iii. Government failed to meet disinvestment targets.
iv. Also orderly depreciation would be good for the Indian economy in the long-term.
India Ratings:
♦ Headquarters: Mumbai. ii. Smitha Crishna is a third-generation heir of the Godrej Group. She has over 20% stake in the Godrej Group. She has an estimated net worth of Rs 37,570 crores.
iii. The Kotak Wealth Hurun – Leading Wealthy Women 2018 list includes 100 Indian women with net worth above Rs 1,000 crore.
iv. This is a first of a kind report released by Kotak Wealth Management along with London-based Hurun Report.
v. Average wealth of the women in the list is nearly Rs 4,000 crore. Total wealth of the top three women in the list is nearly Rs 96,000 crore, which is more than the GDP of 68 countries in the world.
vi. The list has 8 Padma awardees. Most of the women in the list are from pharmaceutical sector followed by the software and services sector.
vii. More than 50 wealthiest women are based in either New Delhi or Mumbai. The Hurun Global Rich List 2018 has 404 women. Out of this 14 women are from India.
About Kotak Mahindra Group:
♦ Established – 1985
♦ One of India’s leading financial services conglomerates

N Raghuram Elected Chair of International Nitrogen Initiative (INI)
N Raghuram has been elected the Chair of the International Nitrogen Initiative (INI), a global policy making initiative.
N Raghuram – Chair of INI:
i. N Raghuram is an Indian scientist and academician. He is a professor at the GGS Indraprastha University, New Delhi.
ii. He has been the President of the Indian Nitrogen Group and a Steering Committee member of the UNEP Global Partnership on Nutrient Management.
iii. He is the first Indian and Asian to be elected as Chair of INI. He will succeed Mark Sutton as chair of INI.
iv. David Kanter of the New York University has been elected as Vice-Chair of INI.
v. N Raghuram and David Kanter will take charge on 1st January 2019. They will be responsible for the network of 6 regional centres: Africa, East Asia, South Asia, Europe, Latin America, North America.

Barak 8: India-Israel missile defence system to be procured by Israeli Navy
The multi-purpose Barak 8 missile defence system, jointly developed by India and Israel, will be procured by the Israeli Navy.
Barak 8:
i. Barak 8 has been developed by Israel Aerospace Industries (IAI), India’s DRDO, Israel’s Administration for the Development of Weapons and Technological Infrastructure, Elta Systems, Rafael and few other Indian defence companies.
ii. It is referred to as Barak-8 by Israel and LR-SAM (long-range surface-to-air missile) by India. It has variants with maximum ranges of 70km and 150km.
iii. It is an operational air and missile defense system used by the Israeli Navy and the Indian Navy and air forces. It has already entered Indian Navy service on board the Kolkata class of destroyers.
iv. Israeli Navy’s Sa’ar-6 corvettes will use Barak-8 to protect Israel’s exclusive economic zone and strategic facilities that face various threats in the marine arena. The sales for Barak-8 have exceeded USD 5 billion.
v. It will provide wide range of aerial and point defence against various threats to the marine arena from the air, sea or land.
vi. It can defend against a variety of short-to-long-range airborne threats, like fixed-wing aircraft, helicopters, drones and projectiles.
vii. It has an advanced phased array multi-mission radar, two-way data link, and a flexible command and control system. It enables users to simultaneously engage multiple targets day and night and in all weather conditions.
About Defence Research and Development Organisation (DRDO):
♦ Chairman – Sanjay Mitra
♦ Headquarters – New Delhi 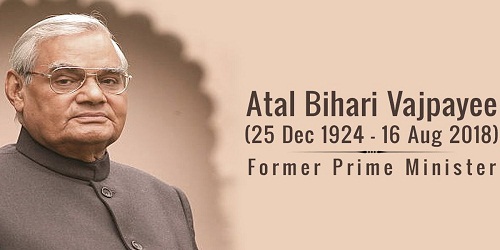 Death of Atal Bihari Vajpayee:
i. Atal Bihari Vajpayee was 93 years old. He was born on December 25, 1924 in Gwalior, Madhya Pradesh.
ii. He entered politics during the Quit India movement in 1942. He was one of the founding members of Jan Sangh, the parent organization of BJP, in 1951.
iii. He became the president of Jan Sangh in 1968 following the death of Deendayal Upadhyaya.
iv. He was the first BJP leader to become the prime minister of India. He was a three-time Prime Minister of India.
v. He was also the first non-Congress Prime Minister to complete the five year term as Prime Minister from 1999 to 2004.
vi. He was elected 10 times to the Lok Sabha from 4 different States. He was the Member of the Rajya Sabha twice.
vii. He was the first external affairs minister to deliver a speech in the UN Assembly in Hindi. He received Bharat Ratna in 2015. His birthday (December 25) is observed as the Good Governance Day……………………………..Click here to Read more

Former India Test captain Ajit Wadekar passes away
On 15th August 2018, former Indian cricket captain Ajit Wadekar, died following a long term illness, at the Jaslok Hospital in South Mumbai.
Death of Ajit Wadekar:
i. Ajit Wadekar was 77 years old. He was born in Mumbai. He made his international cricket debut in 1966.
ii. He was India’s first ODI (One Day Internatioanl) captain. He had scored 2,113 runs in his Test career.
iii. He retired from the international cricket in 1974. After retirement, he served as India’s coach/manager in 1990s when Mohammad Azharuddin was the captain.
iv. He also became the chairman of selectors. He is the only cricketer apart from Lala Amarnath and Chandu Borde to have served as captain, manager, and selector in Indian cricket.
v. He received the Arjuna Award in 1967 and Padmashri in 1972.