We are here for you to provide the important Recent and Latest Current Affairs September 29 2019, which have unique updates of Latest Current Affairs 2019 from all newspapers such as The Hindu, The Economic Times, PIB, Times of India, PTI, Indian Express, Business Standard and all Government official websites.

DDWS, Jal Shakti Ministry and GoI launched the 10 Year Rural Sanitation Strategy (2019-2029)
On September 27, 2019 the Department of Drinking Water and Sanitation (DDWS), Ministry of Jal Shakti, Government of India(GoI) launched 10 Year Rural Sanitation Strategy (2019-2029) to focus on sustaining the change in sanitation behaviour that has been achieved under Swachh Bharat Mission Grameen (SBM-G). This is done to dedicate the Swachh Bharat to Mahatma Gandhi on his 150th birth anniversary by ensuring increase in access to solid and liquid waste management and also ensuring no one is left behind. Shri Gajendra Singh Shekhawat, Union Minister of Jal Shakti, launched the strategy book. 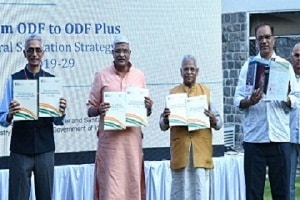 Key points
i. Achievements: Since SBM-Gs launch in 2014, 10 crore toilets have been built in rural areas across the country and nearly 5.9 lakh villages, 699 districts, 35states and Union Territories(UT) were declared Open Defecation Free (ODF) by themselves. This strategy in planning for ODF Plus has been prepared by DDWS.
ii. 10-year strategy: With India seeing the sanitation revolution and SBM-G transformation to Jan Andolan (people’s movement), the 10-year strategy focuses on the need for States and UTs to continue their efforts to sustain the mission gains through capacity strengthening, IEC (Information, education and communication), organic waste management, plastic waste management, grey water management and black water management.
About SBM-G:
♦ The nirmal bharat abhiyan in 1999, which was a total Sanitation Campaign was restructured to form the Swachh Bharat Mission (Gramin) in 2014.
♦ The aim of this SBM-G is to make the nation ODF in 5 years from its implementation i.e, 2019 on Mahatma Gandhi’s 150th birth anniversary. 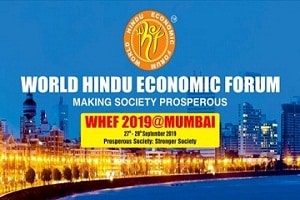 Gujarat launches India’s first ‘Emissions Trading Scheme (ETS)’ to combat particulate air pollution
The State Government of Gujarat has launched India’s 1st trading program called “Emissions Trading Scheme (ETS)” in Surat, Gujarat to combat particulate air pollution.
Key points:
i. About ETS: ETS, an initiative of Gujarat Pollution Control Board (GPCB), is a market-based system where the government sets a cap on emissions and allows industries to buy and sell permits (in kilograms) to stay below the cap. For this reason, ETS is also called a cap-and-trade market.
It is designed with the help of a team of researchers from different institutions.
ii. Cap-and-trade market: Under this, the GPCB initially determine the total mass of pollution that can be put into the air over a fixed period by all factories/Industries as a whole.
A permit is then created in which each is allowed some degree of pollution emissions and the total permit is equal to the maximum fixed pollution emissions. This permit is usually a number/unit that can be bought or sold.
iii. Why Surat: Surat is a densely populated industrial center where textile and dye mills emit large amounts of air pollution & it is equipped with Continuous Emission Monitoring Systems already which makes it possible to predict the mass of  Particulate Matter (PM ) being released.
About Gujarat:
♦ Capital: Gandhinagar
♦ Governor: Acharya Devvrat
♦ Chief minister: Vijay Rupani
♦ National Parks: Vansda National Park, Blackbuck National Park, Gir Forest National Park ,Marine National Park, Gulf of Kutch.

Telangana begins to celebrate the floral festival, Bathukamma for the year 2019
Bathukamma, a 9-day wonderful festival of flowers celebrated by the women on a grand scale has commenced in the Warangal city of  Telangana on September 28, 2019, & will conclude on October 6, 2019. 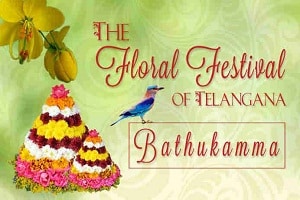 Key points:
i. The festival is celebrated for the entire 9 days of Navratri (begins on the day of Mahalaya Amavasya and ends on Saddula Bathukamma festival on Durgashtami, two days before Dussehra).
ii. In Navratri, Hindu deity Gauri Devi is worshiped as Batukamma idols, which is made up of flower stack.
iii. The women pray to Batukamma, sing folklore and ask deity a boon of health, prosperity, and happiness for her family. Bathukamma means a beautiful pile of flowers. Most of the flowers with medicinal properties are used in Bathukamma.
About Telangana:
♦ Capital: Hyderabad
♦ Chief minister: K. Chandrashekar Rao
♦ Governor: Tamilisai Soundararajan
♦ National Parks: Kasu Brahmananda Reddy National Park , Mahavir Harina Vanasthali National Park ,Mrugavani National Park.

50th Edition of WEF Annual Meeting for 2020 to be held in Davos-Klosters, Switzerland
The 50th Edition of World Economic Forum (WEF) Annual Meeting for 2020 will be held in Davos-Klosters, Switzerland from January 21-24, 2020. The Chief Minister of Punjab Captain Amarinder Singh will be attending the meeting as he has accepted the invitation of WEF president Borge Brende which was issued on behalf of the Forum Board of Trustees.
About WEF:
♦ Motto: Committed to improving the state of the world
♦ Founded: January 1971
♦ Headquarters: Cologny, Switzerland 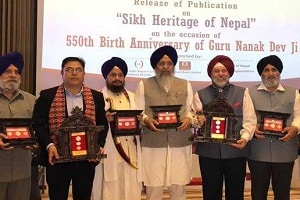 Key points:
i. A book titled “Sikh Heritage of Nepal” based on the Sikh heritage of Nepal was also launched in the program. This book has been published by BP Koirala India-Nepal Foundation in association with the Indian Embassy in Nepal.
ii. Shiromani Gurudwara Prabandhak Committee President Sardar Gobind Singh Longowal, Jathedar of Akal Takht Giani Harpreet Singh and many other prominent Sikh leaders from Punjab were also present during this occasion.
Guru Nanak dev :
He was Nirguna Bhakti saint and social reformer was born at Nankana Sahib (formerly known as Rai Bhoi Di Talwandi) near Lahore, Pakistan on April 15, 1469. He was the first Sikh Guru and founder of Sikhism. The verses composed by him were collected in Adi Granth, written in Gurmukhi script. Guru Nanak Jayanti festival celebrates the birth of  Guru Nanak.
He is said to have visited Balaju area on the outskirts of Kathmandu, Nepal five hundred years ago.
The 550th birth anniversary of Guru Nanak Dev will be celebrated on 12 November 2019.
About NRB:
♦ Founded: 26 April 1956
♦ Headquarters: Kathmandu, Nepal
About Nepal:
♦ Capital: Kathmandu
♦ Currency: Nepalese rupee
♦ President: Bidhya Devi Bhandari
♦ Prime Minister: Khadga Prasad Sharma Oli

Venkaiah Naidu conferred Telugu poet K Siva Reddy with 28th Saraswati Samman award 2018
On September 28, 2019, The Vice President, Shri M. Venkaiah Naidu has honored the Telugu litterateur Dr. K Siva Reddy with the 28th Saraswati Samman 2018 for the creation of his famous poetry collection ‘Pakkaki Ottigilite’ (Turning aside while lying down) in 2016 during an award-giving ceremony organized by the KK Birla Foundation in New Delhi. 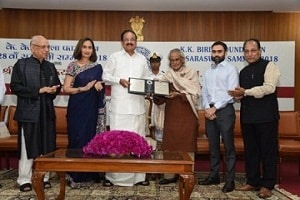 Key points:
i. The selection council of KK Birla Samman, jury (Chayan Parishad), or selection committee, which includes renowned scholars and writers and was headed by constitutionalist Subhash Kashyap, selected Dr. Reddy, who has enriched Telugu literature through compositions of 23 poems.
About Saraswati Samman:
The prestigious Saraswati Samman instituted in 1991 by the K. K. Birla Foundation,  is awarded every year for significant contribution in the field of literature related to any of the 22 languages of India included in the Eighth Schedule of the Constitution. The award carries a cash prize of Rs 15lakh, a citation and a plaque.
About Pakkaki Ottigilite:
It is an anthology of 104 poems in blank verse (a poetry written with regular metrical but unrhymed lines) published in 2016.
About KK Birla Foundation :
It was established in 1991 by Krishna Kumar (K K) Birla in Delhi. It has instituted three awards in the field of literature to honour writers. Besides the Saraswati Samman, these are the Vyas Samman (for Hindi) and Bihari Puraskar (for Hindi and Rajasthani writers of Rajasthan).

A new mineral ‘Goldschmidtite’ discovered inside a diamond
Nicole Meyer, a graduate student at the University of Alberta’s Diamond Exploration Research and Training School (DERTS), Canada and the lead author of the research, discovered a new mineral named  ‘Goldschmidtite’ inside a diamond from a mine- Koffiefontein pipe in South Africa run by De Beers. It is named goldschmidtite in honor of Victor Moritz Goldschmidt, the founder of modern geochemistry.
Key Points:
i. The study “Goldschmidtite, (K,REE,Sr)(Nb,Cr)O3: a New Perovskite Supergroup Mineral Found in Diamond from Koffiefontein, South Africa,” was published in American Mineralogist.
ii. It has high concentrations of niobium, potassium and the rare earth elements lanthanum and cerium and the rest mantle is dominated by other elements, such as magnesium and iron. It was estimated that the mineral was formed about 170 kilometers beneath Earth’s surface, at temperatures reaching nearly 1,200 C.
iii. This is the second new mineral discovered by DERTS student after Nixonite (Na2Ti6O13), which was discovered by Garrett Harris.

Astronomers detect a Jupiter-like planet named “GJ 3512 b”
Astronomers unexpectedly discovered a gas giant Jupiter-like planet named “GJ 3512 b” which is orbiting a dwarf star, located about 30 light-years from the sun. The discovery was published in the journal Science and the lead author of the study is Juan Carlos Morales from the Institute of Space Studies of Catalonia, Spain.
Key Points:
i. The planet completes one orbit around the star every 7 months and has a mass about half that of Jupiter.
ii. The red dwarf star has a mass of about 12% of the sun.
iii. It was detected using the radial velocity method with the CARMENES (Calar Alto high-Resolution search for M dwarfs with Exoearths with Near-infrared and optical Échelle Spectrographs).
iv. According to current theories, this planet shouldn’t exist. 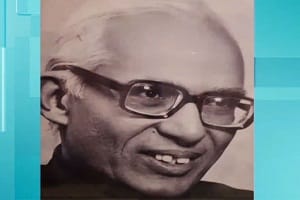 i. He had served as the Foreign Secretary of India from 1987 to 1989. He had also served as Ambassador to Bangladesh, Egypt, Japan, Hungary, and China.
ii. His father Kumara Padma Sivasankara Menon or K.P.S. Menon (Senior) was the first Foreign Secretary of independent India. Sivasankara Menon, nephew of KPS Menon Jr, is the foreign secretary and national security adviser.
iii. He worked as an ambassador to various countries, including Bangladesh, Egypt, Japan, and China. 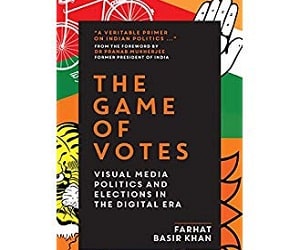 Key points:
i. The book focusing key leaders of political parties & role of modern mass media platforms (beginning with the elections of the 1950s to the feverish social media-driven elections of the 21st century), and the emergence of fake news that impacting poll results in India & across the world.
ii. The book also discusses the practice political alliances, methodologies of electoral campaigning.
iii. The preface of the book has been written by Former President Pranab Mukherjee. 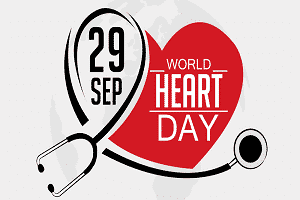 Key Points:
i. It was initiated by the Geneva, Switzerland based World Heart Federation (WHF), in conjunction with the World Health Organization (WHO) in 1999.
ii. The idea was proposed by Antoni Bayés de Luna, the then president of WHF from 1997-99.
iii. There is an aim to reduce global mortality from non-communicable diseases (NCDs) like CVD which accounts for nearly half of all NCD deaths, by 25% by 2025. 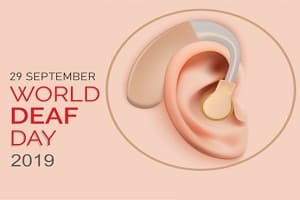 International Week of the Deaf (IWDeaf)
This initiative of WFD was first launched in 1958 in Rome, Italy and is observed annually by the global Deaf Community in the last full week of September to commemorate the first World Congress of the WFD which was held in September. This year it was celebrated from September 23-29 under the theme “Sign Language Rights for All!“