We are here for you to provide the important Current Affairs November 26 2018, which have unique updates of all daily events from all newspapers such as The Hindu, The Economic Times, PIB, Times of India, PTI, Indian Express, Business Standard and all Government official websites. 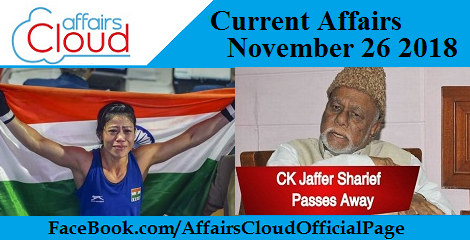 Government hiked outlay for phase I of FAME by additional Rs. 100 crore to Rs 895 crore
On November 25, 2018, the Ministry of Finance notified an increase of Rs. 100 crore in the outlay , to Rs 895 crore from Rs 795 crore, for the first phase of the Faster Adoption and Manufacturing of (Hybrid) and Electric Vehicles (FAME India) scheme.
i. The approval of additional Rs. 100 crore was done as per the recommendations of the Expenditure Finance Committee (EFC).
ii. The objective of the scheme is to promote mass adoption of electric vehicles and the scheme will be implemented by the Ministry of Heavy Industries and Public Enterprises.
iii. The implementation of the first phase of the scheme has been extended four times, for six months each, with the latest being till March 2019.
Finance Ministry:
♦ Union Minister: Shri Arun Jaitley.
♦ Minister of State: Shri Shiv Pratap Shukla, Shri P. Radhakrishnan.

MoRTH issued notification for inclusion of Quadricycles as Non Transport Vehicles
On November 23, 2018, Ministry of Road Transport and Highways (MoRTH) notified the insertion of the item ‘Quadricycle’ as a ‘non transport’ vehicle under the Motor Vehicles Act 1988. 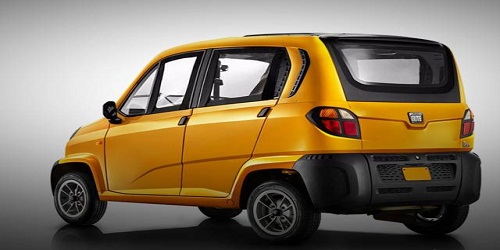 i. Earlier, these were only allowed for transport usage under the Act.
About a Quadricylce:
i. A Quadricycle is a vehicle of the size of a 3-wheeler but with 4 tyres and fully covered like a car.
ii. It has an engine like that of a 3-wheeler which makes it a cheap and safe mode of transport for last mile connectivity.
Ministry for Road Transport & Highways:
♦ Union Minister: Shri. Nitin Gadkari.
♦ Minister of State: Shri. Mansukh L. Mandaviya.

J-K Governor inaugurated annual week-long ‘Jhiri Mela’ festival in Jammu
On November 23, 2018, Jammu and Kashmir Governor Satya Pal Malik inaugurated a week long annual ‘Jhiri Mela’ festival at village Jhiri in Jammu district.
i. The governor announced the construction of a ‘Sarai’ (inn) at village Jhiri for the devotees.
ii. The annual fair is celebrated as a commemoration to the memory of a martyred farmer  named, ‘Baba Jittoo’.
iii. A cultural programme comprising folk songs and a Dogri dance was presented by the Jammu and Kashmir Academy of Art Culture and Languages on the occasion.
Background:
Baba Jittoo’, a farmer gave up his life about 500 years ago in protest against the oppressive demands of a land lord.
Jammu & Kashmir:
♦ Lakes: Mansar Lake, Dal lake, Anchar Lake, Khushal lake, Tarsar Lake.
National Parks in Jammu and Kashmir:
♦ Dachigam National Park, Hemis National Park, Kishtwar National Park, Salim Ali National Park.

Odisha’s Baliyatra festival inaugurated
On 23rd November 2018 the historic Bali Yatra festival was inaugurated in Cuttack, Odisha on the occasion of Kartik Purnima by State Finance Minister Shashi Bhusan Behera.
i. The 10 days long festival is the largest trade fair in Orissa and is likely to witness a footfall of millions of people and more than 1500 makeshift stalls to showcase a wide range of products, including ethnic items brought by artisans from across the country.
ii. It is held on the banks of Mahanadi river in Cuttack, to mark the day when ancient Sadhabas (ancient meriners) would set sail to distant lands of Bali, for trade and cultural expansion.

i. As per the approved proposal, the Jolly Grant airport in Uttarakhand will be renamed after Atal Bihari Vajpayee.
ii. The cabinet also gave its approval to the setting up of the Uttarakhand State Agency For Public Services to ensure time-bound delivery of services and redressal of complaints. i. This was held between:

ii. This was the first round of talks for Wang who earlier in 2018 succeeded State Councillor Yang Jiechi.
iii. The following were discussed in the constructive talks:

Background:
Senior defence officials of India and China held the 9th India-China Annual Defence and Security Dialogue in Beijing on November 13 after a one-year gap due to the Doklam standoff.
China:
♦ Capital: Beijing.
♦ Currency: Renminbi.

NBFC Mudra loans grew faster than banks in FY18: report by MUDRA
On November 23, 2018, According to the 2017-18 annual report of Pradhan Mantri Mudra Yojana (PMMY), Non Banking Financial Company(NBFC) sanctioned Mudra loans under PMMY, grew faster than banks in FY 2018.
i. This is the first time that the bad loan data has been released by Micro Units Development & Refinance Agency (Mudra).
Highlights of the report:
i. NBFCs sanctioned approximately Rs 27,000 crore of Mudra loans during the fiscal 2018 as against Rs 92,492.68 crore sanctioned by public sector banks.
ii. Thus NBFCs not only met their Mudra target of Rs.9,050 crore for FY18, but their sanctions for the year were a five-fold jump from the previous year.
iii. NBFC Mudra loans sanctions rose 396% from last fiscal compared with just 29% increase of Mudra loans by state-run banks.
iv. Among this, AU Small Finance Bank was the top lender among Small Finance Banks (SFBs) and the State Bank of India (SBI) was the top lender among state-run banks followed by Canara Bank and Punjab National Bank.
v. According to the report, a total of 577 crore small businesses and micro units are there in the country which are majority owned by scheduled caste, scheduled tribe or other backward classes.
vi. In the financial year 2017-18, overall loans worth Rs 2.54 lakh crore were classified as Mudra loans.
vii. This was an increase of 41% from Rs 1.80 lakh crore of loans  sanctioned in the last financial year.
viii. For 2018-19, a target of Rs 3 lakh crore has been set.
Background:
MUDRA in its last annual report stated that it has begun the process of tracking bad loans in the portfolio of Mudra loans.
About Pradhan Mantri Mudra Yojana (PMMY):
♦ Launched: 2015.
♦ It is a scheme to provide loans up to Rs. 10 lakh based on 3 categories, to non-corporate, non-farm small and micro-enterprises. The categories are:

NASA And SpaceX Prep Historic Test Flight To Space
The National Aeronautics and Space Administration (NASA) in collaboration with SpaceX, a private American aerospace manufacturer and space transportation services company, is going to send humans for the first time in eight years through SpaceX’s Crew Dragon capsule for Commercial Crew Program.
i. Bob Behnken and Doug Hurley of NASA will be the first two astronauts to test the commercial spaceflight.
ii. As part of the preparation, the space agency will first shoot out an unpiloted test flight on January 7 from NASA’s Kennedy Space Center, Florida, United States. It will undergo an in-flight abort test sometime before its first crewed flight in June 2019.

Bangladesh captain fastest to 200 wickets, 3,000 runs Test double
On 24th November, 2018 Bangladesh Test captain and left arm spinner Shakib Al Hasan became the fastest to complete the double of 200 wickets and 3000 runs in the Test format of the game. Shakib achieved the feat in his 54th Test beating the long-standing record of 55 matches by all-rounder Ian Botham.
i. He also became the first Bangladeshi bowler to claim 200 Test wickets after a comprehensive 64-run victory against West Indies in the first Test of the on-going series in Chittagong. Windies all-rounder Keiron Pollard became his 200th Test victim. On the same day and against the same opposition six years ago – November 24, 2012 – Shakib had picked up his 100th Test wicket.

Highlights
i. Australia defeated England by eight wickets in the final held in Antigua to secure their fourth Women’s World Twenty20 title. England scored 105 in the final which was easily chased by Australia with the loss of only 2 wickets in 15.1 Overs.
ii. Australia’s Alyssa Healy was named as the player of the tournament.
iii. India’s quest for a maiden ICC Women’s World T20 title ended with an eight-wicket defeat against England in the Semi-Finals of the ICC Women’s World T20.
Key Points
i. Harmanpreet Captained Indian team in ICC Women’s World T20.
ii. India’s Men Cricket Team captain Virat Kohli launched “Jersey knows no gender” campaign to support women’s team in the event.
iii. The Tournament will be broadcasted live in more than 200 countries for the first time.
ICC to Use DRS for the First Time in the Women’s T20 World Cup
International Cricket Council (ICC) decided to introduce Decision Review System (DRS), using ball tracking and edge detection technology for the first time in Women’s T20 World Cup 2018.
About DRS
i. Umpire Decision Review System (UDRS) commonly known as DRS is the technology-based system which is used to assist Match Officials of Cricket in decision making.
ii. DRS was first introduced in Test Cricket. It was tested for the first time in India vs Sri Lanka match in 2008 and officially launched by on 24th November 2009.
Uber partners ICC to support Women’s World T20
On 8th November 2018, Global Cab hailing Major, Uber had partnered with International Cricket Council (ICC) to support the Sixth edition of Women’s World T20 held in West Indies.
Key Points
i. Uber is the first Ridesharing and food delivery platform to partner with ICC for 2018 Women’s World Twenty20.
ii. ICC and Uber aims to leverage one of the most popular sports of world, Cricket to engage broader cricketing community in a discussion about the role a sports can play to empower girls and women around the world.
iii. This partnership also focuses on programmes to provide sponsorship to aspiring women cricketers.
About Uber
♦ Founder: Travis Kalanick and Garrett Camp
♦ Headquarters: San Francisco
ICC Team up with Google
International Cricket Council (ICC) partnered with Google to provide its cricketing fans a great viewing experience of the Semi-finals and Final of the ICC Women’s World T20 which was held in West Indies.
Key Points
i. This Partnership includes enabling the live casting of Video content from ICC Mobile app on cast-enabled devices i.e. Google Home Hub and Chromecast.
ii. This collaboration between ICC and google enabled the viewers to stay up to date on matches, teams and favourite players.
International Cricket Council (ICC)
♦ Chairperson: Shashank Manohar
♦ CEO: David Richardson
♦ Headquarters: Dubai, UAE 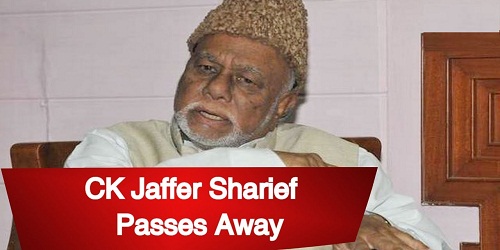 i. He held the office of the Minister of Railways under PV Narasimha Rao, from 1991 to 1995.
ii. He also served as a minister of state for Railways from 1980 to 1984.
iii. He handled several other central union portfolios like coal and irrigation.
iv. Overall, Sharief served 7 terms as the member of parliament, the last of which was from 1999 to 2000.

World COPD (Chronic Obstructive Pulmonary Disease) Day – 21st November
On 21st November 2018, World Chronic Obstructive Pulmonary Disease (COPD) Day was organized by the Global Initiative for Chronic Obstructive Lung Disease (GOLD) in collaboration with health care professionals and COPD patient groups throughout the world. The day was aimed at raising awareness about chronic obstructive pulmonary disease (COPD) and improving COPD care throughout the world.
Key points:
i. The theme of this year’s event was ‘Never too early, never too late’.
ii. COPD is a preventable disease that causes breathlessness, chronic sputum production and coughing. Key risk factors for COPD are tobacco smoking, indoor and outdoor air pollution, and exposure to occupational dusts and chemicals.
iii. COPD is currently the fourth leading cause of death in the world with about 251 million current cases of COPD in the world and is projected to be the 3rd leading cause of death by 2020.
iv. iCOPD is not curable, but treatment can relieve symptoms, improve quality of life and reduce the risk of death.