MoEFCC constituted a committee to implement National Clean Air Program
Ministry of Environment, Forest and Climate Change (MoEFCC) has constituted a committee to implement the National Clean Air Program (NCAP). The objective is to reduce the PM (particulate matter) 2.5 and PM 10 concentration by 20% to 30% in at least 102 cities by 2024. The committee will be headed by the Secretary, Union Environment Ministry. The headquarters of the committee will be in New Delhi.
Key Highlights
i. The other members of the committee will be Joint Secretary (Thermal), Ministry of Power; Director General, The Energy Resources Institute (TERI) and Professor Sachidananda Tripathi, IIT Kanpur.
ii. The 102 cities, across 23 states and Union Territories will be identified by the Central Pollution Control Board (CBCB). The selection criteria will be based on their ambit air quality data between 2011 and 2015. The NCAP is envisioned as a five-year action plan with 2019 as the first year. There would be a review every five years.
About Central Pollution Control Board (CBCB)
♦ Headquarter: New Delhi
♦ Chairman: S. P. Singh Parihar

Indo-French navies will hold their joint exercise off the Goa-coast from 1st May to 10th May, 2019
India and France will be holding their bilateral naval exercise, Varuna 19.1 Arabian Sea off the Goa coast from 1st May to 10th May, 2019.
Key Points:
i. In this 17th edition of the Indo-French naval exercise, the participants are:

ii. The exercise will be conducted in 2 phases, stated as follows:

iii. The 2nd part of the naval exercise, Varuna 19.2, will be held at May-end in Djibouti.
About ‘Varuna’:
♦ The bilateral naval exercise started in 1983 and was termed as ‘Varuna’ in 2001.
♦ It forms a major part of the Indo-French strategic partnership, symbolising the strong relations between India and France.
♦ The Joint Strategic Vision of India-French Cooperation in the Indian Ocean Region was signed in March 2018 by President Emmanuel Macron and Prime Minister Narendra Modi during president Emmanuel Macron’s State visit to India.

Pak named its retaliatory action against India on February 27 as ‘Operation Swift Retort’
The Pakistan Air Force announced that they will observe its retaliatory action against India on February 27 against the Balakot strike of Indian Air Force as ‘Operation Swift Retort’.
i. The Indian air strikes at Balakot terror camp on February 26 was response of Pakistan based Jaish-e-Mohammed (JeM) attack by a suicide bomber in Pulwama that killed 40 CRPF jawans.
ii. In response to Indian attack, Pakistan Air Force (PAF) retaliated and captured IAF Wing Commander Abhinandan Varthaman who was released by Pakistan on March 1.
About Pakistan
♦ Capital: Islamabad
♦ Currency: Pakistani Rupee

NASSCOM, GE Healthcare became strategic partner for health-tech innovation
IT industry body, The National Association of Software and Services Companies (NASSCOM) has entered a strategic partnership with GE Healthcare. The objective is to bring digital healthcare solutions to the market. NASSCOM has announced this partnership through its Centre of Excellence-Internet of Things (CoE-IoT).
i. This partnership will also help to flourish the health-tech start-up ecosystem in the country which further help in co-creating solutions for real-world healthcare challenges in the areas of digital applications for early detection, productivity solutions and remote and connected care among others.
About Centre of Excellence-Internet of Things (CoE-IoT)
It is developed by NASSCOM. It is an innovation hub for start-ups. It provides a platform for collaborative innovation.
About NASSCOM
♦ Headquarter: Noida, U.P
♦ Chairman: Keshav R. Murugesh 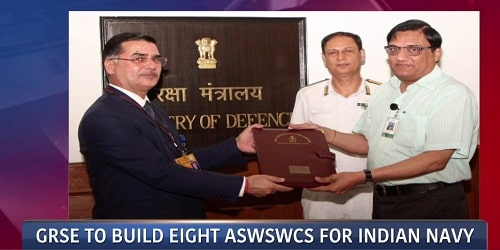 Key Highlights
i. The first ship will be delivered to the Indian Navy in 42 months and subsequently, two ships will be required to deliver per year and the time of completion of the project will be 84 months.
ii. These vessels will have a deep displacement of 750 tonnes and speed of 25 knots and also capable of full-scale subsurface surveillance of coastal waters. It will also be capable of destroying subsurface targets in coastal waters.
iii. The ships will be equipped with a state-of-the-art integrated platform management system which includes propulsion machinery, power generation, auxiliary machinery, distribution machinery, and damage control machinery etc. The vessels will also conform to the latest Marine Pollution (MARPOL) Standards of the International Maritime Organization (IMO) and Safety of Life at Sea (SOLAS).
About International Maritime Organization
♦ Headquarter: London, United Kingdom
♦ Secretary-General: Kitack Lim

DCIL signed MoU with WAPCOS to jointly identify future projects
The Dredging Corporation of India Limited (DCIL) has signed a memorandum of understanding (MoU) with Water & Power Consultancy Services (WAPCOS) Limited, a mini-ratna PSU under Ministry of Water Resources, River Development, and Ganga Rejuvenation. The objective is to jointly recognize suitable future projects and carry out geo-technical investigation and engineering consultancy in the fields like water resources, power and infrastructure, port and harbour dredging. 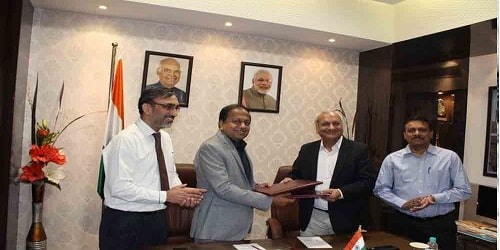 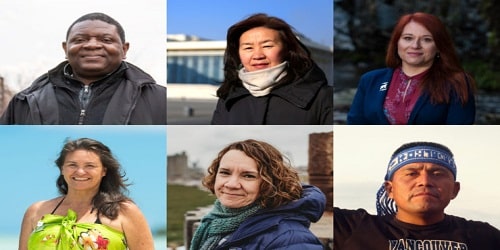 Key Points:
i. This prize is awarded every year to environmental activists from each of the global 6 inhabited continents.
ii. The Goldman Environmental Prize is also known as Green Nobel Prize and awards a cash prize of $200,000.
iii. The Prize was established by late philanthropists and civic leaders, Rhoda and Richard Goldman in 1989 in San Francisco, California to celebrate grassroots environmentalists. The year, 2019 marks the 30th anniversary of the Prize.
iv. Till date, the Prize has awarded 194 winners from 89 different countries.
iv. The Prize winners are selected by an international jury from confidential nominations which is submitted by a global network of individuals and environmental organizations.
v. This year, the award winners were presented the Prize at an invitation-only ceremony at the San Francisco Opera House. The former Vice President and legendary environmental champion, Al Gore presented the keynote address at the ceremony.
2019’s prize winners are as follows:

Emperor Akihito becomes the first Japanese monarch to abdicate in 200 years
On 30th April 2019, The 125th Emporer of Japan, 85-year-old, Emporer Emeritus Akihito abdicated after 30 years of ruling because of his declining health and age-related problems. His rule was known as Heisei. While his son Emporer Naruhito, 59 -year-old succeeded the Chrysanthemum Throne on 1 May 2019, ushering in the Reiwa era. This is the first time  Japan’s modern History that the country has both an Emporer and Emeritus. 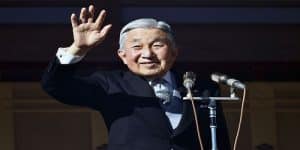 The ‘Ceremony of the Abdication’ took place in a state room of the Imperial Palace, Tokyo, Japan. Prime Minister Shinzo Abe, Crown Prince Naruhito, and Crown Princess Masako were present in the function.
About Emporer Emeritus Akihito:
i. Akihito is the first Japanese Emporer to abdicate since Kokaku in 1817.
ii. He was born on 23 December 1933 in Tokyo, Japan.
iii. 30-year long Heisei Era started on 8 January 1989.
iv. Akihito is the eighth-oldest currently-serving state leader by age (85 years, 121 days).
About Japan:
♦ Capital: Tokyo
♦ Currency: Japanese yen

ICRISAT-led team collaborated with the BGI-Shenzhen to sequence genetic code to develop chickpeas resistant to vagaries of weather conditions
The International Crops Research Institute for the Semi-Arid Tropics’ (ICRISAT) team partnered with the BGI-Shenzhen, China, involving 39 scientists from 21 research institutes worldwide, notified that scientists have successfully completed the largest-ever exercise of entire-genome re-sequencing of chickpea, by sequencing 429 chickpea lines from 45 nations to identify genes that are resistant to various extreme factors. The study has been published in Nature Genetics online with the title, “Resequencing of 429 chickpea accessions from 45 countries provides insights into genome diversity, domestication and agronomic traits“.
The objective of this sequencing for the agricultural community will cater to the successful development of newer varieties of chickpea with better and large-scale production, with a yield that is tolerant to disease, pest, drought, heat (up to 38 degree Celsius ) and variable weather conditions. This will thus contribute to the sustainability of agricultural development in the developing countries.
Key Points:
i. The research study confirmed the fact that chickpea came to India from Fertile Crescent of Mediterranean through Afghanistan.
ii. The research also stated that since India, the biggest consumer of pulses globally (in 2016 India produced 64% of the world’s total chickpeas) is facing a rising production gap, thus, the new study could help India  in attaining its previous level of pulse production.
Additional Information:
i. In South Asia more than 90% of chickpea (Cicer arietinum ) cultivation happens.
ii. Chickpea is a cool season crop and suffers reduction in yield in higher temperature conditions. They perform optimally in 70° to 80°F day-time temperatures and 64° to 70°F night-time temperatures.
iii. Worldwide, drought and heat cater to more than 70% of yield loss in chickpea.
iv. Being a cool-season crop, in India chickpea is sown in September-October and harvested in January-February.
v. Chickpea is consumed as a dry pulse crop or as a green vegetable and the seeds contain about 20% protein, 5% fat and 55% carbohydrate. They are also used as livestock feeds due to their high protein content.
It is also known by name of gram, Bengal Gram, Garbanzo, Garbanzo bean, and Egyptian pea. 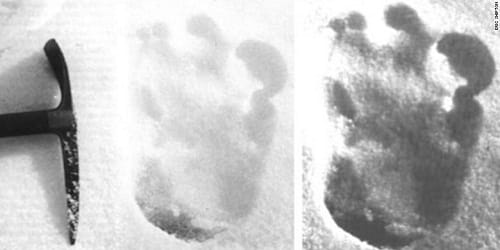 i. The yeti also known as Abominable Snowman or Asian  Bigfoot is a giant ape-like creature often figures in South Asian folklore. Yetis are believed to weigh anywhere between 91 to 181 kilograms with a height of above 6 feet.
ii. According to a report in the National Geographic, British explorer Eric Shipton captured the footprints of the Yeti in 1951 for the first time. It was found on the Menlyung Glacier which is located on the Nepal-Tibet border near the Makalu Barun national park. 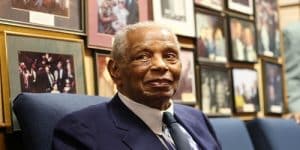 On 28th April 2019, United States Sixth Circuit Judge, Damon Jerome Keith, a grandson of slaves passed away at the age of 96 in Detroit, the city where the prominent lawyer was appointed in 1967 to the US District Court. He served on the Sixth Circuit for over 40 years.
i. He was born on 4 July 1922 in Detroit, Michigan, United States.
ii. Keith served more than 50 years in the federal courts, and before his death still heard cases about four times a year at the 6th U.S. Circuit Court of Appeals in Cincinnati.

Coffee Table book on Architecture & Landscape of Rashtrapati Bhawan presented to UAE Minister of Tolerance
Ambassador Navdeep Suri presented UAE Minister of Tolerance Sheikh Nahayan Mubarak Al Nahayan with the Coffee Table book on “Work of Beauty: Architecture and Landscape of Rashtrapati Bhawan”, which has been published by Publications Division, Ministry of Information and Broadcasting.
i. The book was commissioned by President’s Secretariat and Indira Gandhi National Centre for the Arts (IGNCA), Ministry of Culture, Government of India.
ii. UAE Minister had visited the India Pavilion of the ongoing Abu Dhabi International Book Fair 2019. India is the ‘Guest of Honour’ at the Book Fair. 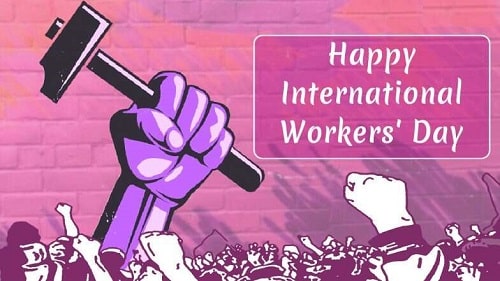 i. In India, the first Labour Day was celebrated on 1 May 1923 in Madras by Labour Kisan Party of Hindustan. Labour Day is also called Antarrashtriya Shramik Diwas or Kamgar Din in India.
ii. Workers day is observed to commemorate the happenings of May 4, 1886, the Haymarket affair (Haymarket Massacre) in Chicago.
iii. The Second International, a pan-national organisation of socialist and communist political parties, accorded 1 May as the Labour Day in 1891.
About Labour Kisan Party of Hindustan:
♦ Founder: Malayapuram Singaravelu Chettiar
♦ Founded: 1923

Gujarat celebrates its foundation day on 1st May
Today is the 60th Foundation Day of Gujarat. Every year, 1st May is celebrated in different districts of Gujarat by launching various welfare schemes.
i. This year, there is no official celebration due to the model code of conduct (MCC).
ii. The state of Gujarat came into existence on 1st May 1960 after the division of Mumbai state under Bombay Reorganization Act.
iii. Ahmedabad (city in Gujarat) has featured in the Forbes list of ‘the world’s fastest-growing cities’ at rank number 3 after Chengdu and Chongqing from China.
Few Facts:
♦ Foundation Day: May 1, 1960
♦ Capital: Gandhinagar
♦ Largest City: Ahmedabad
♦ Districts: 33
♦ Governor: Om Prakash Kohli
♦ Chief Minister: Vijay Rupani