We are here for you to provide the important Current Affairs March 5 2019, which have unique updates of all daily events from all newspapers such as The Hindu, The Economic Times, PIB, Times of India, PTI, Indian Express, Business Standard and all Government official websites. 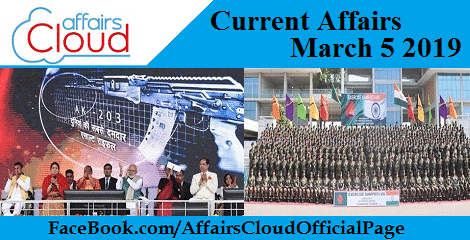 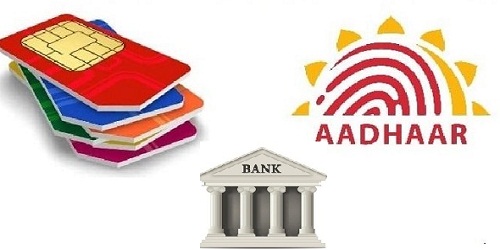 Key Points
i. Rajya Sabha could not approve the Bill eventhough Lok Sabha has given its assent. In such a situation an ordinance is necessary as per the law.
ii. The cabinet has approved it with effect to an Ordinance to give changes proposed in Aadhaar and two other legislations. The amendment include stiff penalties for violation of norms which are set for the use of Aadhaar and violation of privacy.
iii. It also bans storing the core biometric information including Aadhaar number by service providers in case where an individual has offered the national ID for authentication. The amendment also stated that anyone not offering Aadhaar cannot be denied any service.
About Unique Identification Authority of India
♦ Chairman – J Satyanarayana
♦ CEO – Ajay Bhushan Pandey 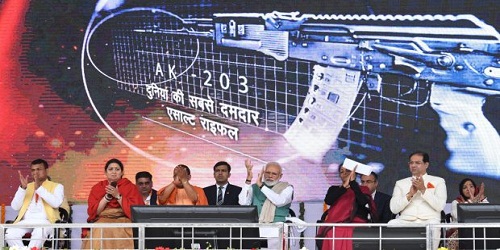 Key Points
i. The meeting was held between North Korean Leader Kim Jong-un and US President Donald Trump. It was the second meeting between them following the first meeting in June 2018 in Singapore.
ii. After June 2018 summit, US Secretary of state Mike Pompeo appointed Stephan Biegun as US Special Representative for North Korea.
iii. During the summit, Trump sought a guarantee from North Korea to stop testing its missiles and nuclear weapons. In return, North Korea demanded the lifting of 5 core economic sanctions which was imposed over Korea.
About United States
♦ Capital- Washington DC
♦ Currency – Dollar
♦ President – Donald Trump
About North Korea
♦ Capital – Pyongyang
♦ Currency – Won
♦ Leader – Kim Jong-un

U.S. and South Korea end military exercises “Foal Eagle 2019” and “Key Resolve”
On 2nd March 2019, the United States and South Korea decided to call off their joint exercise “Foal Eagle” and “Key Resolve” and bifurcate them into smaller exercises. This is being done to ease tensions with North Korea. They were earlier scheduled to take place in spring of 2019.
i. The scaled down military exercises will be held from March 4 to March 12 by the US and South Korea.
While “Key Resolve” will be replaced by “Dongmaeng” which is also known as alliance in English, Foal Eagle drills will be replaced by a smaller battalion-sized exercise.
ii. This decision has been made after there was a failure to reach an agreement on denuclearisation during the summit in Hanoi, Vietnam between President Donald Trump and North Korean leader Kim Jong Un.

‘Sampriti-2019’ commenced at Tangail in Bangladesh
The eighth edition of joint military exercise ‘Sampriti-2019’ between the armies of India and Bangladesh was commenced on 3rd March, 2019, which aimed to increase mutual cooperation and camaraderie with an impressive ceremony in Tangail, Bangladesh. 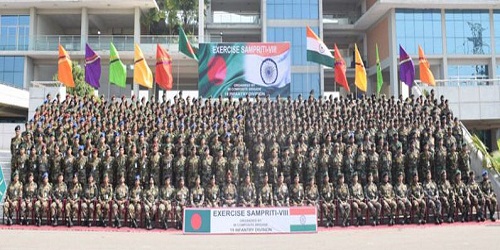 Key Points
i. This exercise will be conducted till 15th March as a part of the ongoing India-Bangladesh defence cooperation.
ii. The motive behind this exercise is to hone their tactical and technical skills in countering insurgency, counter terrorism and aid to civil authorities for disaster management in an UN peace keeping scenario involving a combined deployment at a battalion level.
About Bangladesh
♦ Capital- Dhaka
♦ Currency- Taka
♦ Prime Minister- Sheikh Hasina. 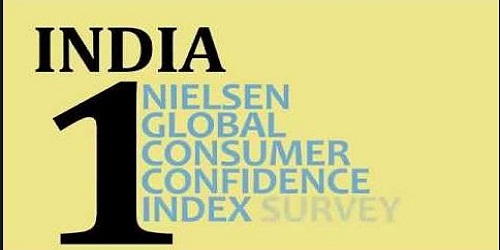 Key Points
i. India maintained its 1st position from 3rd quarter and in the 4th quarter of 2018 India’s Consumer Confidence Index (CCI) score is 133.
ii. South Korea has the most pessimistic consumer who are worried about rising inflation, lower wage growth, unemployment, a weak stock market and global trade uncertainties in the world.
iii. CCI Confidence Board measured optimism towards job prospects, health of personal finances and spending intentions in the next 12 months for the survey.
iv. The Global Consumer Confidence Index became highest in 14 years by increasing one point to 107 in 4th quarter of 2018. The increase in confidence is a positive sign for economic and business growth in 2019.

RBI slaps penalty of Rs. 11 crores on five banks for non-strengthening of ‘SWIFT’ related controls
A penalty of the following amount has been imposed by the Reserve Bank of India on 4 PSU banks and 1 private sector bank:

i. The penalty has been imposed for the delay caused in following the guidelines mentioned in ‘Time bound implementation and strengthening of SWIFT related controls’ issued by the Reserve Bank of India on 20th February 2018.

Lowering of fees for Brokers, exchanges approved by SEBI board
On 1st March 2019, SEBI board with a view to making more cost-effective trade in Indian stock market approved lowering of fees charged from brokers, stock exchange and the companies seeking to get listed.
Key Points
i. The fees payable to brokers is reduced by 33.33% from Rs.15 per crore of transactions to Rs.10. In case of agri-commodity derivative transactions, the fee would be reduced sharply by 93.33% from Rs.15 to just Re.1
ii. A proposal to grant permanent registration to custodians, instead of periodical renewal every year got approval from SEBI board. The initiative would facilitate ease of doing business for custodians.
iii. SEBI also decided to reduce fees payable by the issuers for one refiling,which is done within one year of validity of observation letter.
About Securities and Exchange Board of India
♦ Headquarter: Mumbai
♦ Chairperson: Ajay Tyagi

These exercises were performed from February 28 to March 3.
Key Points:
i. 503 shuttle buses were used at once by the team.
ii. There are 6 bathing festivals in Kumbh out of which 5 have taken place successfully with around 22 crore pilgrims having taken a holy dip and the 6th – Mahashivratri took place on 4th March 2019.
About Uttar Pradesh
♦ Capital- Lucknow
♦ Chief Minister- Yogi Adityanath
♦ Governor- Ram Naik

Indian-American teenager has been conferred with the 2019 National STEM Education Award
Kavya Kopparapu, an Indian-American teenager residing in Herndon, Virginia has been awarded the National STEM (Science, Technology, Engineering and Math) Education Award 2019. She has been awarded for her significant invention in enhancing treatments of glioblastoma– which is the deadliest form of brain cancer.
Key points:
i. She has developed GlioVision, which is a high accuracy medicine platform powered by Artificial Intelligence (AI). It performs prediction of brain tumour characteristics by using a scanned image of a biopsy rather than a DNA sample, in lesser time and at lower costs.
ii. The prize money for STEM amounts to $10,000.
iii. She is a student of computer science and biology at Harvard University.
iv. She also heads Girls Computing League– a non-profit organisation which has raised more than $100,000 for computer science programming and has impacted more than 3,800 American students.
v. She has also delivered speeches at Smithsonian Institution, NASA Kennedy Space Centre, and was a participant in numerous AI conferences.

Sanjeev Ranjan to be designated as Secretary at MoRTH
As a part of a top-level bureaucratic reshuffle effected by the central government according to a Personnel Ministry order, Senior IAS officer Sanjeev Ranjan has been designated as secretary of Ministry of Road Transport and Highways (MoRTH).He will succeed Yudhvir Singh Malik.
Key points
i. Sanjeev Ranjan, 1985-batch IAS officer of Tripura cadre, is currently the chairman of National Highways Authority of India (NHAI).
ii. He will be succeeded by Nagendra Nath Sinha as a NHAI chief, who is managing director in National Highways and infrastructure Development Corporation. Key points
i. Sheikh Ahmad has won a new five-year term until 2024.
ii. An IOC member, stepped down from his position in the global Olympic body in November because of his forgery accusation in a criminal court against the Kuwaiti and four others.

India’s doubles badminton coach Tan Kim Her resigns
India’s doubles badminton coach– Tan Kim Her, a native of Malaysia has resigned from his post citing personal reasons. His term with Badminton Association of India (BAI) had to come to an end after the 2020 Tokyo Olympics.
i. He had coached men’s doubles pair of Chirag and Satwiksairaj Rankireddy who went on to win the silver medal and the mixed team gold medal at the Commonwealth Games. They’ll now be coached by two new coaches, Flandy Limpele and Namrih Suroto from Indonesia.
ii. He also coached the women’s doubles squad of Ashwini Ponnappa and N Sikki Reddy who went on to win a bronze at the Commonwealth Games.

T.N. declared to be the first state to introduce TAVI in government hospital
Vijaya Bhaskar, State Health Minister of Tamil Nadu stated that Tamil Nadu has become the first state in the country to introduce Transcatheter Aortic Valve Implantation (TAVI) in the government hospitals.
i. TAVI was launched in November 2018 at the Tamil Nadu Government Multi Super Speciality Hospital (TNGMSSH), Omandurar Estate and two people underwent the surgery free of cost.
ii. An MoU (Memorandum of Understanding) was signed between the state government and Heart Team India for these surgeries.
iii. TAVI is performed on old-age heart patients who cannot undergo an open-heart surgery and involves replacement of valve through a keyhole procedure. 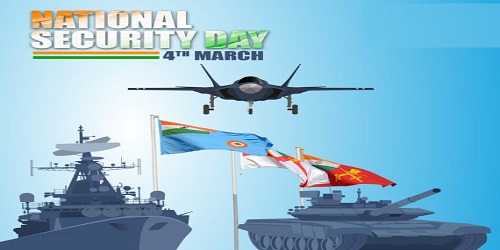 World Day of the Fight Against Sexual Exploitation observed on March 4,2019
The World Day of Fight Against Sexual Exploitation is observed on March 4 every year. It aims   to spread awareness about the prevalent sexual exploitation, largely among women and children.
Sexual assault statistics:
i. Around 35 per cent of women worldwide sexual violence by a non-partner atleast once in their lives.
ii. Adult women comprise 51 per cent of all human trafficking victims globally. Women and girls together comprise 71 per cent, with girls representing nearly three out of every four child trafficking victims. Nearly three out of every four trafficked women and girls are trafficked for the purpose of sexual exploitation.

“Notun Disha”initiated by Tripura govt to assess academic level of school students
The government of Tripura announced ‘Notun Disha’ (New Direction) for assessing the academic level of students in classes III-VIII and then improving their current level. It was launched by state Education Minister Ratan Lal Nath.
i. This initiative aims to make students proficient in all the subjects and for this purpose an educational assessment was conducted from 25-28th February 2019 to ascertain the current level of students.
About Notun Disha

Tribal musician of Tripura, Thanga Darlong, conferred with first AB Vajpayee Life Time Achievement Award
Thanga Darlong, a musician from Tripura was awarded with the first Atal Behari Vajpayee Life Time Award at the 37th Agartala Book Fair in Agartala, Tripura. He was honoured by the Deputy Chief Minister of Tripura,Jishnu Devvarma.
i. He is the last tribal musician who plays Rosem which is a flute-like musical instrument made of bamboo.
ii. He had earlier received the following awards:

iii. He was also a part of the ‘Tree of Tongues in Tripura’ which was directed by the National Awards winner Joshy Joseph in 2016.