We are here for you to provide the important Current Affairs March 4 2019, which have unique updates of all daily events from all newspapers such as The Hindu, The Economic Times, PIB, Times of India, PTI, Indian Express, Business Standard and all Government official websites. 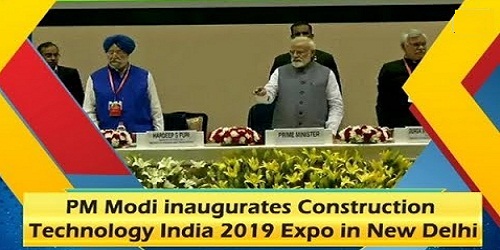 Key Points
i. It will identify proven, innovative and globally established technologies such as researchers, startups, developers, academia, etc. For use which will be in the Indian context.
ii. The event will provide a space for interaction among stakeholders that can open up new areas for collaboration and will facilitate. The conversion of ideas into market-ready products which is ready to be launched in the market place.
iii. The main beneficiary of the initiative is youth. Technologies which are proven during CTI-2019 will further invited to design and build lighthouse projects.
iv. The project of one thousand housing unit will be built in 6 state that are Gujarat, Jharkhand, Madhya Pradesh, Tamil Nadu, Tripura and Uttar Pradesh.
About Ministry of Housing and Urban Affairs
♦ Minister of state: Hardeep Singh Puri
‘April 2019 – March 2020’ announced as Construction –Technology year
On 2nd March 2019, Prime Minister Narendra Modi declared ‘April 2019–March 2020’ as Construction-Technology year and the use of advanced technology to meet the increasing demand of housing in the country caused by rapid urbanization got stressed.
Key Points
i. Government’s mission of provide brick house to every Indian by 2022 has sought the support from the private sector for the fulfillment of the mission.
ii. The declaration was made during the inauguration of Construction Technology India 2019 Expo-cum-conference held in New Delhi.
ii. The Global Housing Technology Challenge will be aimed at introducing best technologies that seek to construct low cost houses in a shorter period of time.
iv. Tax laws will be modified which will be helpful for the middle class to buy a house GST will be reduced from 8% to 1% on affordable houses.

Anthem on ‘plastic-free India’ launched in seven languages by Environment Minister
On 28th February 2019, an anthem ”Plastic Waste-Free India’‘ which has been composed and produced by Pandit Deendayal Upadhyaya Smriti Manch (PDUSM)– a non-profit organisation which works in the field of social and environmental issues was launched by Union Minister for Science & Technology, Earth Sciences and Environment, Forest and Climate Change, Harsh Vardhan.
i. It is a part of an initiative which aims to turn India into a plastic-free nation by 2022 and aims at supporting and improving the plastic waste management and recycling ecosystem in the country.
ii. It has been launched in seven languages – Hindi, Marathi, Gujarati, Tamil, Telegu, Malyalam and Kannada. 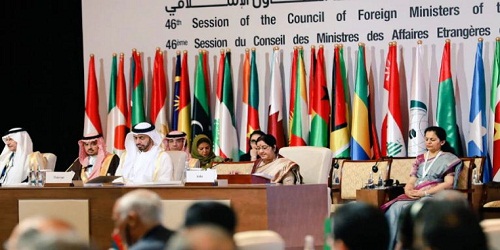 i. This is the first time that India participated in the meeting. Sushma Swaraj attended the inaugural session of the Organisation of Islamic Co-operation meeting in Abu Dhabi where she was welcomed as a “guest of honour”.
ii. OIC is an influential grouping of 57 Islamic countries.
About United Arab Emirates (UAE)
♦ Capital- Abu Dhabi
♦ Currency- Dirham. 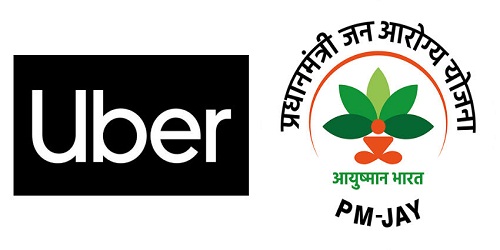 i. The agreement states that under the Uber CARE initiative- meant for drivers and delivery partners which has been launched by Uber, will help in establishing common service centres (CSCs) at Partners Seva Kendras across India. CSCs have entrepreneurs at the village level who will go to these centres and verify eligibility and issue e-cards to drivers for the Ayushman Bharat Scheme.
ii. Drivers and delivery partners can avail this benefit by paying merely Rs 30 for procuring an Ayushman Bharat card, without any charges for pre-hospitalisation, hospitalisation and post-hospitalisation expenses.
About Ayushman Bharat
♦ Ayushman Bharat aims to provide healthcare facilities to over 10 crore families covering urban and rural poor.
♦ PMJAY-Ayushman Bharat is the biggest government-sponsored healthcare scheme in the world.
♦ The scheme offers an insurance cover of Rs 5 lakh to around 50 crore citizens.

DRDO Chairman honoured with Missile Systems Award by US-based AIAA
i. Satheesh Reddy, the Secretary of India’s Department of Defence R&D and Chairman of the Defence Research and Development Organisation (DRDO)has been chosen by the American Institute of Aeronautics and Astronautics (AIAA)as the co-winner of the 2019 Missile Systems Award.The other co-winner is Rondell J. Wilson who is a former Principal Engineering Fellow of Raytheon Missile Systems.
ii. Satheesh Reddy is the first person to be honoured with this award outside the USA in 40 years.

OSDMA conferred with 2018 SKOCH Award
SKOCH award, the highest independent honour in the country, was given to Odisha State Disaster Management Authority (OSDMA) for its remarkable achievements in the field of disaster management.
Key Points
i. The award was presented at the mega event of 56th SKOCH Summit in New Delhi.
ii. The OSDMA received an Order-of-merit in the Gold category for constructing 879 multipurpose cyclone and flood shelters and Order-of-merit’ in the silver category for constructing disaster resilient houses for about 17,000 Phailin affected families.
About Odisha
♦ Capital- Bhubaneswar
♦ Chief Minister- Naveen Pathak
♦ Governor- Ganeshi Lal

Tata Steel recognised as one of World’s Most Ethical Companies
Tata Steel has received an award as one of the 2019 World’s Most Ethical Companies. The award has been given by Ethisphere Institute, USA. The company was also recognised 7 times previously (this being the eighth recognition) and is one of the only two awardees in the ‘Metals, Minerals and Mining’ industry.
In 2019, 128 honourees across 21 countries and 50 industries have been recognised.

Sir Alastair Cook officially receives knighthood from Queen
On 27th February 2019, Alastair Cook– formerly a skipper of the England cricket team was officially awarded the knighthood for his services to cricket. He was honoured by Elizabeth II, the Queen of England at the Buckingham Palace, London, England. 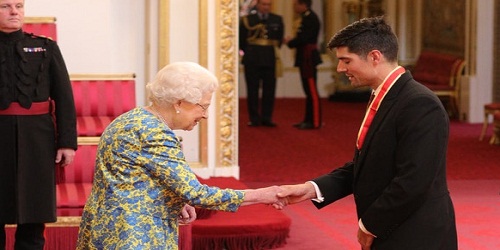 i. He is the 11th English cricketer to be awarded knighthood for services to cricket and also the first English cricketer to get the honour after Sir Ian Botham received it in 2007.
ii. He made his Test debut in 2006 against India, was the captain of England for 59 Test matches and captained the team to win 24 matches in the longest format of the game. He has played a total of 160 test matches. Key Points
i. Macky Sall was elected as president in 2012 for the first time.
ii. He is known for enhancing infrastructure of the country. He is also known as a moderniser who has helped to boost economic growth in the country.
About Senegal
♦ Capital: Dakar
♦ Senegal Currency- CFA Franc
♦ Prime Minister- Mahammed Boun Abdallah Dionne 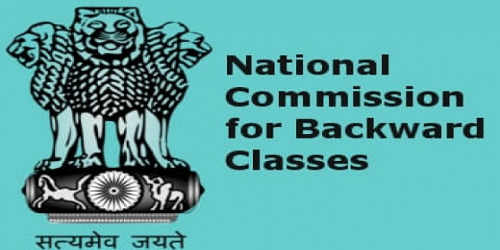 i. Other members of the commission are:

Key Points:
i. This committee was approved by President Ram Nath Kovind.
ii. The NCBC was constitutionally recognized by Parliament in 2017, after repealing the National Commission for Backward Classes Act, 1993.
iii. The NCBC now has the authority of a civil court after being given Constitutional status. It was established under 123rd Amendment Bill of the Constitution 2018 and 102nd amendment act under the provisions of Article 338B of Indian Constitution. Hsieh Su-wei and Barbora Strycova won Women’s Doubles title
Chinese Taipei Hsieh Su-wei and Czech Republic’s Barbora Strycova won women’s doubles titles by defeating Czech Republic Lucie Hradecka and Russia’s Ekaterina Makarova for 6-4, 6-4. It is their first title of the season and second overall after victory at the Indian Wells Masters in the US.

Russian Nobel Prize winner for physics Alferov dies aged 88
Zhores Alferov who won the Nobel Prize in Physics in 2000 and was also a member of Russian parliament, died at the age of 88 in St. Petersburg, Russia. 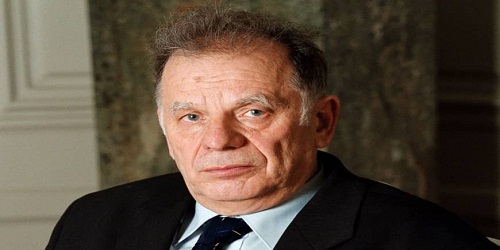 i He was an honorary member of numerous research institutions including the American National Academy of Sciences.
ii. He researched in the field of information technology and his research was the backbone of computers, CD players, mobile phones etc.
iii. He hails from Belarus, Europe and was the first Russian to win a Nobel Prize since 1990 Nobel peace prize awardee Mikhail Gorbachev, a Soviet leader.

World Hearing Day: 3rd March
World Hearing Day is observed on 3rd March every year by Office of Prevention of Blindness and Deafness of the WHO (World Health Organization). The Theme for this year’s World hearing day is “Check your Hearing”.
This year, WHO launched an app, HearWHO that will allow people to check their hearing. 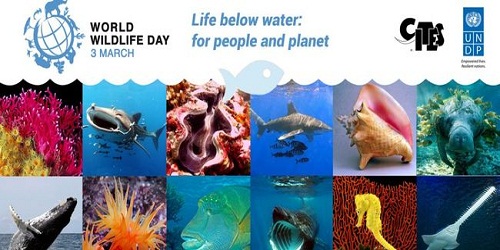