We are here for you to provide the important Current Affairs March 21 2019, which have unique updates of all daily events from all newspapers such as The Hindu, The Economic Times, PIB, Times of India, PTI, Indian Express, Business Standard and all Government official websites. India-Indonesia Coordinated Patrol (Ind-Indo Corpat) began at Port Blair
The 33rd edition of the India-Indonesia Coordinated Patrol (Ind-Indo Corpat) was started on March 19, 2019 and will continue till 4th April 2019 at Port Blair, Andaman & Nicobar Islands in order to enhance interoperability and strengthen existing bonds of friendship between India and Indonesia.The closing ceremony will be held at Belawan, Indonesia. Key Points:
i. Under this both countries’ ship and aircraft would undertake patrolling of 236 nautical miles long International Maritime Boundary line on the respective sides.
ii. The Indian Navy, Commodore Ashutosh Ridhorkar, VSM Naval Component Commander, Andaman and Nicobar Command are led the Indian delegation.
iii. The Indonesian side led by Cmde Dafit Santoso.
iv. It is also a part of the Indian Government’s vision of SAGAR (Security and Growth for All in the Region), for assisting countries in the Indian Ocean Region.
About Indonesia
♦ Capital: Jakarta
♦ Currency: Indonesian rupiah
♦ Prime minister: Joko Widodo 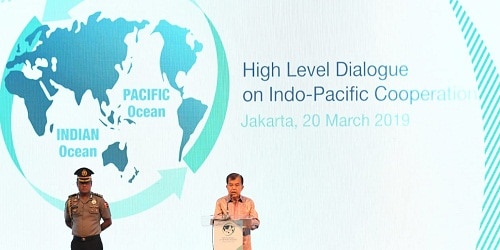 i. The Dialogue saw the participation of representatives from India, Australia, US, Brunei Darussalam, Japan, South Korea, Russia, New Zealand and China apart from 10 member ASEAN countries.
ii. The objective behind this meet was to urge all participating governments to talk openly about their plans for increasing cooperation and for building trust in the Pacific Ocean and Indian Ocean region.
The Indo-Pacific region is comprised of three-fifth of the world’s population with gross domestic product (GDP) amounted to US$52 trillion.
Static GK – Indonesia
♦ Currency – Indonesian rupiah
♦ President – Joko Widodo
♦ Prime Minister – Post abolished in 1959 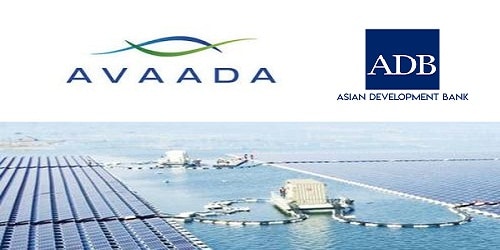 Key Points:
i. It was signed by Avaada Energy chairman Vineet Mittal and ADB Principal Investment Specialist Mayank Choudhary.
ii. This agreement will help in Government’s strategy to give a boost in the share of renewable energy generation capacity from about 20% in 2018 to 40% by 2030, and to reduce India’s emission intensity of its gross domestic product (GDP) by 33% to 35% by 2030.
iii. The investment will be done through ADB’s Ordinary Capital Resources and Leading Asia’s Private Infrastructure Fund (LEAP), a funding arm of Japan International Cooperation Agency (JICA) administered by ADB.
About Asian Development Bank (ADB)
♦ Headquarters: Mandaluyong, Philippines
♦ President: Takehiko Nakao
♦ Founded: 19 December 1966
♦ Membership: 67 countries

Government clears proposal to buy 10 lakh hand grenades for Indian Army
On 20th March 2019, Union Defence Minister cleared the proposal to purchase 10 lakh hand grenades for Indian Army under ‘Make in India’ programme.
Key Points
i. It costs around Rs. 500 crores which will replace the existing HE-36 grenades manufactured by the Ordnance Factory Board (OFB).
ii. The Defence Research and Development Organisation (DRDO) and a production agency has been selected to manufacture the multi- mode grenades.
iii. The government also signed a Rs. 700 crore agreement with a US manufacturer for purchase of Sig Sauer Assault Rifles.
iv. Make in India is a type of Swadeshi Movement which encourage the companies to manufacture their products in India and invest in the manufacturing sector.
About Ministry of Defence
♦ Minister – Nirmala Sitharaman 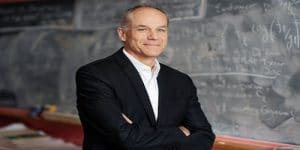 Key Points:
i. He is the first Latin American to win the award, which is given for exceptional contribution for directing life’s spiritual dimension.
ii. The prize started by late global investor Sir John Templeton in 1972.
iii. In the year 2018, it was won by King Abdullah II of Jordan. 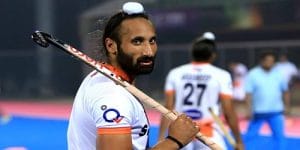 Japanese unmanned spacecraft,Hayabusa2 probes Asteroid Ryugu
Japanese unmanned spacecraft,Hayabusa2 reached Asteriod Ryugu on June,2018.Since then,the spacecraft landed multiple robotic probes on its rocky terrain of the Asteroid Ryugu.
i. The spacecraft had surveyed 69,000 locations covering almost 90 percent of Asteroid Ryugu by using a near-infrared spectrometer capable of detecting hydrated minerals.
ii. According to its study published in U.S. Journal Science,the spacecraft probed and found the small amounts of minerals containing water on the surface of the asteroid.A part of the water might be from asteroids and comets.
About Hayabusa2:
♦ Launched on 3 December 2014,
♦ It is an asteroid sample-return mission,
♦ Operated by Japanese space agency, Japan Aerospace Exploration Agency (JAXA).

NASA’s Fermi Gamma-ray Space Telescope spotted “cannonball” pulsar speeding through space
On 19th March 2019, NASA’s Fermi Gamma-ray Space Telescope and the National Science Foundation’s Karl G. Jansky Very Large Array (VLA) discovered pulsar hurtling through space.
Key Points
i. This pulsar is named as PSR J0002+6216 (J0002 for short). It is located 6,500 light years away in the constellation Cassiopeia.It speeds nearly 2.5 million miles per hour which is as fast as it could travel the distance between Earth and the Moon in just 6 minutes.
ii. Pulsar is a super dense rapidly spinning neutron stars which are left behind when a massive star explodes.
iii. The study will help to better understand how the explosions are able to kick the neutrons to start in such a high speed.

Abu Dhabi signed to host T10 League for next five years
The T10 cricket League is set to be played in Zayed Cricket Stadium of Abu Dhabi for the next five years, starting from 2019 season. The first match in the T10 League will be held on 23rd October 2019. 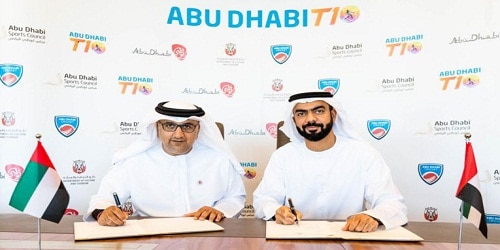 Key Points
i. Abu Dhabi Cricket (ADU) partnered with the Department of Culture and Tourism, Abu Dhabi (DCT Abu Dhabi) and Abu Dhabi Sports Council (ADSC) has entered into a five year agreement with organizers of the T10 league for 5 years.
ii. T10 is the shortest form of cricket which was first played in UAE in 2017. 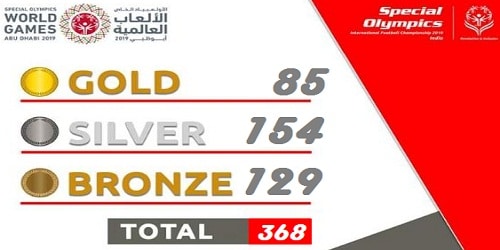 Key Points
i. India wins 368 medals at the Special Olympics World Summer Games including 85 gold, 154 silver and 129 bronze. Jitendra Pawal won a gold medal in the 200m race.
ii. Medals are won in Judo, Athletics, Cycling, Aquatics, Powerlifting, Basketball Traditional, Table Tennis, Roller skating, Badminton, Handball Traditional and Football 7 Side Female competitions in the game.
iii. Out of 24 Olympic type sports which featured the World Cup, India participated in 14 types. It is for the 9th time India has participated in the Special Olympics.
iv. India participated in Judo and Futsal for the first time.
About United Arab Emirates
♦ Capital – Abu Dhabi
♦ Currency – Dirham

Junior Davis Cup & Fed Cup to be held in Bangkok as India lost its hosting rights
India has lost the hosting rights of two international tennis tournaments viz. Junior Davis Cup and Fed Cup which were scheduled to be held in RK Khanna stadium, New Delhi in April. Now both events will be held in Bangkok, Thailand.
Reasons behind losing of hosting rights:
i. Absence of a written guarantee from India that the visa entry would be granted to the Pakistani contingent for the Davis Cup.
ii. Closure of Pakistan’s air space after the Balakot air strike, resulting flights of participating teams have to take alternate and long routes to enter the Indian airspace.
Earlier, India had stripped to host Junior Asian championships by United World Wrestling (UWW). The stripping off of India’s hosting rights is due to the India’s denial of visas to Pakistani shooters for the ISSF World Cup held in Delhi in February following the Pulwama attack.

India-Pakistan war hero, Captain M.N. Samant  died aged 89 years
The 1971 India-Pakistan war hero, Captain Mohan Narayan Rao Samant of the Indian Navy, passed away at the Bharatiya Arogya Nidhi Hospital in Juhu at the age of 89 years due to cardiac arrest. He was a native of Pune (Maharashtra).
i.He was an awardee of Maha Vir Chakra for his bravery.
ii.He had trained over 400 Bengali college students as maritime commandos in the run up to the 1971 war against Pakistan.
iii.In 2012 Bangladesh Govt conferred him the “Friend of Liberation War” honour. 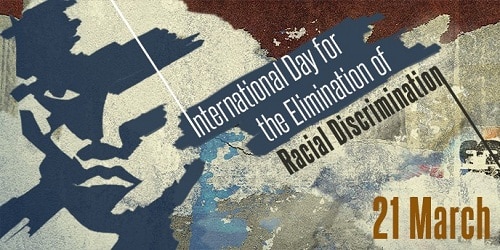 i. The day commemorates the Sharpeville massacre on 21 March 1960, which involved killing of 69 people by police, at a peaceful demonstration against the Apartheid regime (a regime which embraced racial discrimination) in Sharpeville, South Africa.
ii. The UN General Assembly proclaimed the day as a UN Day of observance in 1966.

World Poetry Day observed on 21st March
World Poetry Day observed on 21st March 2019 to encourage the reading, writing, and teaching of poetry throughout the world.
i. In the year 1999, UNESCO, in its 30th General Conference in Paris, has declared this day to support linguistic diversity and to safeguard endangered languages.
About UNESCO (United Nations Educational, Scientific and Cultural Organization):
♦ Director-General – Audrey Azoulay
♦ Headquarters – Paris, France i.Theme for International Day of Forests: “Forests and Education – Learn to Love Forests”.
ii. It has been organized since 2013 by the United Nations General Assembly with an aim to raise awareness and educate people about the importance of forest for maintaining the balance of the ecosystem.