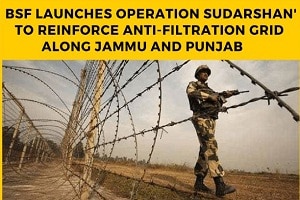 Key Points:
i. Name: The exercise is named ‘Sudarshan’ drawing from the legendary and mythological cutting wheel or the ‘sudarshan chakra’ on Lord Krishna’s finger.
ii. Coverage: It will cover over 1,000-kms length of the India-Pakistan International Border. Jammu shares about 485-kms of the International border with Pakistan, about 553-kms of the front is in Punjab and on India’s western flank with Rajasthan and Gujarat.
iii. Exercise: The commanders of the force will prepare their watch towers and sentry posts better, replenish arms and ammunition dumps, strengthen artillery positions, check and plug border fence breaches, detect underground and cross-border tunnels and make all operational and logistical arrangements to strengthen the vigil along the sensitive and infiltration-prone border.
iv. Scrutiny: The Union Home Ministry will go through the final report of the operation. After the scrutiny, sanctions will be made to procure gadgets, equipment and infrastructure that is required to plug gaps and strengthen border management.
About BSF:
♦ Headquarters: New Delhi
♦ Founded: December 1, 1965
♦ Motto: Duty Unto Death
♦ Director General: Rajni Kant Mishra

Uttarakhand was named among best performing states in ‘Beti Bachao, Beti Padhao’ scheme
Uttarakhand has been adjudged as one of the country’s five best performing states under the National Programme Beti Bachao Beti Padhao (BBBP) scheme aimed at addressing declining child sex ratio and issues of women empowerment.
Key Points:
i. As per the Union Ministry of Women and Child Development, the State received this recognition for its consistent performance in respect of sex ratio at birth.
ii. In addition to Uttarakhand, Haryana has bagged three awards, including one state-level and two district-level awards, for consistent performance in respect of the sex ratio at birth (SRB).
iii. The two districts of Haryana which won the award are Bhiwani and Mahendragarh.
About Beti Bachao Beti Padhao (BBBP) Scheme:
♦ BBBP scheme was launched on 22 January 2015 by Prime Minister Narendra Modi.
♦ It is a joint initiative of the Ministry of Women and Child Development, the Ministry of Health and Family Welfare and the Ministry of Human Resource Development.

Key Points:
i. It is a 500-bed hospital with 50 Intensive Care Units (ICUs) and 12 operation theatres. It will provide advanced treatment to burn patients in Bangladesh.
ii. It was built at a cost of over 500 crores Taka.

Sri Lanka inaugurated its first model village built with Indian assistance at Ranidugama in Gampaha
On July 6, 2019, The first model village built with Indian assistance under the Model Villages Program was jointly inaugurated by Minister of Housing and Construction and Cultural Affairs Sajith Premadasa, former President Chandrika Bandaranayke Kumaratunga and Acting High Commissioner of India Shilpak Ambule at Ranidugama in Gampaha in Sri Lanka.
Key Points:
i. Partnership: India entered into a partnership with the Ministry of Housing and Construction and Cultural Affairs of Sri Lanka to build 100 model village consisting of a total of 2,400 houses across Sri Lanka.
ii. Project: It is a part of a housing project meant for war-affected people in the north and east Sri Lanka and estate workers in the plantation areas. 2,400 houses are in addition to the 60,000 accommodations built under the Indian Housing Project.
iii.Grant: Grant from India to Sri Lanka for the project was Rs 1,200 million ($17.5 million).
About Sri Lanka:
♦ Capital: Sri Jayawardenepura Kotte, Colombo
♦ Currency: Sri Lankan rupee
♦ Prime Minister: Ranil Wickremesinghe

Price for SGBs fixed at Rs 3,443 per gram
The government fixed the price of the new series of Sovereign Gold Bonds (SGBs) at Rs 3,443 per gram opening July 8, 2019. In consultation with the Reserve Bank of India (RBI), the Centre decided to allow a discount of Rs 50 per gram from the issue price (Rs 3,393 per gram) to those investors who apply online and if the payment is made through digital mode. SGBs will be issued every month from June 2019 to September 2019.
Key Points:
i. Under SGB scheme, launched in November 2015, bonds are denominated in units of one gram of gold and multiples thereof.
ii. Minimum Investment in bonds is 1 gram and a maximum limit of subscription of 500 gram/person/fiscal year (April-March).
iii. Maximum Limit of subscription is 4 kg for an individual and Hindu Undivided Family (HUF) and 20 kg for trusts and similar entities per fiscal. 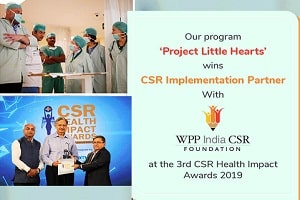 i. It was awarded for its contribution to the treatment of underprivileged children suffering from congenital heart disorders (CHD).
ii. The CSR Health Impact Award recognizes and applauds organizations which have implemented health-focused CSR ventures to impact lives. 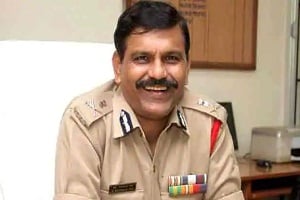 i. Earlier Mr.Alok Verma had been transferred to Fire Services as Director General from the CBI department, but Verma denied the offer and never took charge as DG of Fire services.

Indian Army plans to buy American howitzer ammo for long-range accurate strikes
The Indian Army will buy the Excalibur artillery ammunition from the US (United States) under the emergency procurement procedures. It can strike targets more than 50 km away with the use of the GPS (Global Positioning System). It can be busted in the air and after its penetration into bunker-type structures by using its different fuses.

New gene linked to schizophrenia discovered by Indian and Australian scientists
After 18 years of research, Scientists from the University of Queensland in Australia and a team of Indian researchers led by R Thara, co-founder and director of the Chennai-based Schizophrenia Research Foundation have discovered a new gene directly linked to schizophrenia. They identified a gene called NAPRT1 which encodes an enzyme involved in vitamin B3 metabolism.
i. Schizophrenia is a chronic and severe mental disorder that affects how a person thinks, feels, and behaves.

Arctic mission will trap scientists in ice to study the impact of climate change
The German icebreaker RV Polarstern, a hulking ship will set out for the Arctic mission. It will trap scientists for a year in ice in the Arctic Ocean to study the impact of climate change. Researchers from 17 nations will participate in the mission. They will allow the water to freeze around them.  The mission will be led by Markus Rex of Alfred Wegener Institute in Germany. The outlay of this expedition is $158 million.

Vinesh Phogat & Divya Kakran won gold; Pooja Dhanda won silver at the Wrestling Grand Prix 2019 of Spain
At the Grand Prix of Spain Women’s Wrestling for the year 2019 held in Madrid, India finished second with 130 points in team championship behind Russia which stood at 165 points. 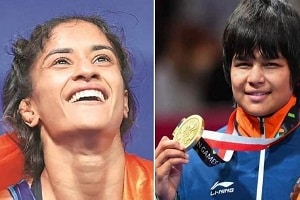 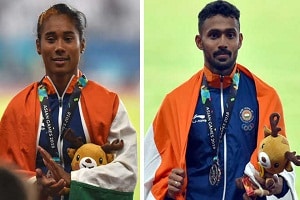 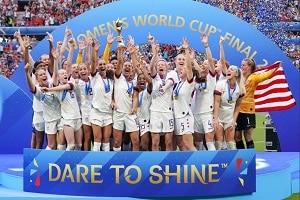 Brazil beats Peru in the final to lift the Copa America 2019 title
At the 46th Edition of Copa America held between 14 June to 7 July 2019 at 6 venues, the host country, Brazil defeated Peru with 3-1 scores to clinch the Copa America Title 2019 in the finals held at Estadio do Maracana in Rio de Janeiro, Brazil. It was the 9th title for Brazil and first since 2007. 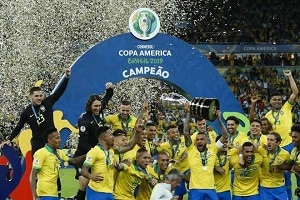 Key Points:
i. Everton, Gabriel Jesus, and Richarlison scored the goals for Brazil and Paolo Guerrero scored the single goal for Peru.
ii. Brazil’s Dani Alves was named as the player of the tournament and Alisson of Brazil was the best goalkeeper.
iii. In a clash for third place, Argentina defeated Chile with 2–1.
About Copa America:
It is the international men’s association football championship organized by South American Football Confederation (CONMEBOL).
About CONMEBOL:
♦ Formation: 9 July 1916
♦ Headquarters: Luque, Paraguay

IOC removed Kuwait suspension and allows participating in 2020 Olympics
International Olympic Committee (IOC) has removed a ban on the Kuwait Olympic Committee (KOC) and permitted to compete in the 2020 Olympics.
i. Kuwait was suspended in October 2015 following “undue government interference after a sports law that was not compatible with the basic principles that govern the Olympic Movement was passed in the country”.
ii. FIFA also suspended the Kuwait Football Association for the same reason in October 2015 but removed the ban in December 2017.
iii. KOC had successfully implemented “a roadmap agreed between all parties” and it participated in the 2020 Olympics. Sheikh Fahad Nasser Sabah Ahmad Al Sabah was elected President of the KOC recently.
About International Olympic Committee(IOC)
♦ Headquarters: Lausanne, Switzerland
♦ President: Thomas Bach
♦ Created by: Pierre de Coubertin and Demetrios Vikelas in 1894 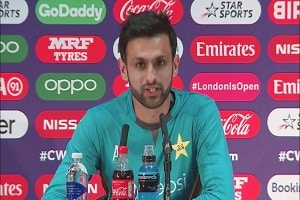 i. He played his last ODI match against India at 2019 World Cup in Manchester. Malik played 287 ODIs and scored 7,534 runs at an average of 34.55. He scored nine centuries and 44 half- half-centuries. He also took 158 wickets in his ODI career. 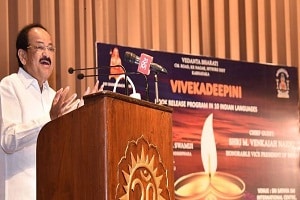 i. It is a concise book of aphorisms (a memorable expression of a general truth or principle).
ii. The book has been translated into ten languages- English, Hindi, Bengali, Kannada, Telugu, Tamil, Malayalam, Marathi Gujarati and Odia.