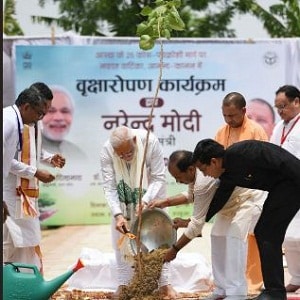 i. Unveil of Statue: PM unveiled the statue of former Prime Minister Shri Lal Bahadur Shastri at the Lal Bahadur Shastri International Airport in Varanasi, UP. He was greeted by Shastri’s sons Anil and Sunil Shastri, Chief Minister Yogi Adityanath, Bharatiya Janata Party’s (BJP) Working President JP Nadda and state unit chief Mahendra Nath Pandey at the International Airport.
ii. Tree Plantation Drive: PM launched a tree plantation drive at Harahua primary school in Anand Kanan forest on the Panch Kosi Marg by planting a sapling. UP government has planned to reconstruct this route at a cost of Rs 97 crore and Rs 4 crore was spent on developing basic infrastructure.
iii. Visit to Museum: He also visited the Virtual Experiential Museum at Man Mahal, situated on the banks of the Ganges near the iconic Dashashwamedh Ghat, Varanasi. It was established by the National Council of Science Museums (NCSM), under the Union Ministry of Culture and was inaugurated by PM in February 2019. It describes the various aspects of cultural heritage.
About Uttar Pradesh:
♦ Capital: Lucknow
♦ Governor: Ram Naik
♦ Wildlife Sanctuary: Hastinapur Wildlife Sanctuary
♦ National Parks: Dudhwa National Park

The 3rd edition of International Sunflower Seed and Oil Conference(ISSOC) 2019 will be held in Mumbai
India will be hosting the 3rd edition of  International Sunflower Seed and Oil Conference (ISSOC) 2019 in Maharashtra, Mumbai (on July 19-20) with the aim to encourage better communications among sunflower oil producers, industry groups, academic researchers and local governments.
Key points:
i. The event hosted by the Solvent Extractors’ Association of India (SEA) & Organized by International Sunflower Oil Association (ISOA) will see the participation of around 300 delegates from across the world with interests in sunflower seed, oil, and meal.
ii. The 1st edition was held in 2015 at Shanghai, China and the 2nd edition was held in 2017 at Odessa, Ukraine.
iii. India is the largest importer of sunflower oil with imports of about 2.8 million tones and globally the import is about 9.6 million tonnes.
iv. In 2018-19, globally the sunflower seed production is at 51.41 million tonnes, sunflower oil at 19.45 million tonnes and sunflower meal at 20.90 million tonnes.
About Maharashtra:
♦ Chief Minister:  Devendra Fadnavis
♦ Governor:  C. Vidyasagar Rao
♦ National Parks: Chandoli National Park ,Gugamal National Park ,Nawegaon National Park ,Pench National Park.

Pink City Jaipur declared as a World Heritage site by UNESCO
At the 43rd Session of the UNESCO World Heritage Committee which is underway from June 30 to July 10, 2019 in Baku, Azerbaijan, the United Nations Educational, Scientific and Cultural Organization (UNESCO) added the ‘Pink City’ Jaipur/Walled City of Jaipur of Rajasthan, known for its iconic architectural legacy, into the list of the World Heritage Sites.
i. With Jaipur’s inclusion, the number of heritage sites across India on the UNESCO World Heritage list, increased to 38.
ii. The historic walled city of Jaipur in Rajasthan was founded in 1727 AD (Anno Domini) under the patronage of Sawai Jai Singh II. It serves as the capital city of the culturally-rich state of Rajasthan…………………………..Click here to Read more 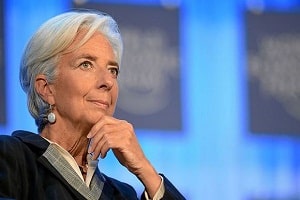 Key points:
i. EU (European Union) leaders nominated France’s Christine Lagarde as president of the ECB in a meeting in Brussels, Belgium.
ii. She would succeed current ECB president Mario Draghi (Italy), whose term ends on October 31.
iii. Lagarde was born on 1 January 1956 in Paris, France. She has served eight years as head of the IMF since 2011 and four as French finance minister- the first woman to hold the role in any G7 country.
About ECB:
♦ Headquarters: Frankfurt, Germany
♦ Currency: Euro

EU leaders nominate Germany’s von der Leyen to lead EU Commission
The defense secretary of Germany, Ursula von der Leyen (60) has been nominated by the European leaders to lead the European Commission, the executive arm of the EU (European Union) that’s responsible for legislation and governing. She will be replacing Jean-Claude Juncker. 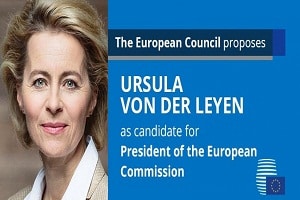 Key points:
i. She was backed by German Chancellor Angela Merkel but there was resistance to her nomination &then made up by leaders of the EU’s 28 member states.
ii. She was born in Brussels in 1958, is the only minister who has been in Merkel’s government since the German leader took office in 2005. she served as family minister, labor minister and under Merkel’s government.
iii. The Council also propose Belgian Prime Minister, Charles Michel as president of the European Council, Josep Borrell Fontelles(Spain) as foreign policy chief.
About EU commission:
♦ It is an institution of the European Union, responsible for proposing legislation, implementing decisions, upholding the EU treaties and managing the day-to-day business of the EU.
♦ Headquarters: Brussels, Belgium
♦ Founded: 1 January 1958

Army & NeGD signed MoU to develop revamped app
On July 5, 2019, The Indian Army and the National eGovernance Division (NeGD), a part of the Ministry of Electronics and Information Technology (MeitY), signed a Memorandum of Understanding (MoU) to develop a revamped application. It will maintain the centralised database for personnel, equipment and major stores to provide management-related information to Integrated Headquarters of Ministry of Defence (Army) and other agencies. 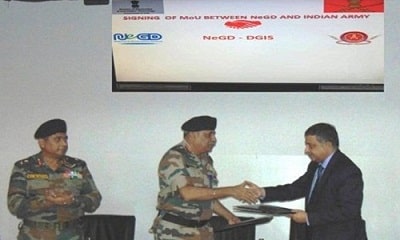 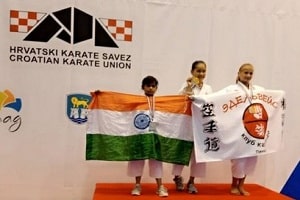