We are here for you to provide the important Current Affairs January 14 2019, which have unique updates of all daily events from all newspapers such as The Hindu, The Economic Times, PIB, Times of India, PTI, Indian Express, Business Standard and all Government official websites. Minister Rajyavardhan Rathore launched National Youth Parliament Festival 2019 in New  Delhi
on January 12, 2019,Minister of Youth Affairs and Sports, Col Rajyavardhan Rathore launched the National Youth Parliament Festival 2019 at a function in New Delhi. The festival will continue till 24th of Feburary 2019.The theme of the festival is- “Be the Voice of New India” and “Find solutions and contribute to policy”. 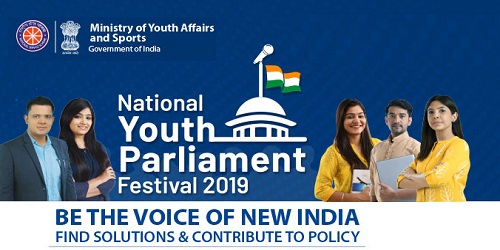 Sushil Modi to head committee on GST revenue shortfall faced by states
On January 13, 2019,Bihar Deputy Chief Minister Sushil Modi is to head the seven-member committee to look into revenue shortfall being faced by the states after the GST roll-out, and suggest steps for augmenting collections, a GST Council notification said.The GST Council, headed by Finance Minister Arun Jaitley and comprising state ministers, had on December 22, 2018, decided to set up a group of ministers (GoM) to analyse reasons for the shortfall in revenue collections by the states since July 2017. 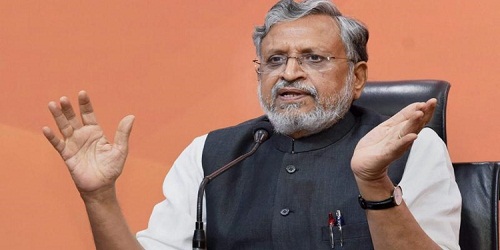 Facts to be known:
i. GST was rolled out on July 1, 2017. As per the GST law, the centre compensates states to ensure that their revenue is protected at the level of 14 per cent over the base year tax collection in 2015-16.
ii. The committee will undertake data analysis using econometric and statistical tools and suggest “suitable measures/policy intervention” for course correction for revenue augmentation, particularly for the states suffering high revenue shortfall.
iii.It would also look into structural patterns of major sectors of the economy impacting revenue collection, including the services sector.
iv. The other members of the GoM include Punjab Finance Minister Manpreet Singh Badal, Kerala Finance Minister Thomas Isaac, Karnataka Rural Development Minister Krishna Byre Gowda, Odisha Finance Minister Shashi Bhushan Behera, Haryana Taxation Minister Capt Abhimanyu and Goa Panchayat Minister Mauvin Godinho.
v. The central government has released  Rs 48,202 crore as GST compensation to states during April-November 2018, higher than the Rs 48,178 crore paid in the previous financial year.

Sikkim CM launched ‘One Family, One Job’ scheme in Rojgar Mela 2019 to give one state government job to one family
On January 12, 2019, Sikkim Chief Minister Pawan Kumar Chamling launched the ‘One Family One Job’ scheme, under which for every family one government job has been allotted, in Gangtok.
New recruits were taken for Group C and Group D posts in 12 departments. i. As part of the scheme, a “Rojgar Mela” (employment fair) was organised at the Paljor stadium in Gangtok, where over 12,000 unemployed youths, from 32 constituencies, were handed out appointment letters.
ii. Letters were given to families, by the Department of Personnel, which do not have a government job.
iii. He also announced that over 25,000 already employed but unregularised government employees would also be subsequently regularised within 2019.
iv. Thus, Sikkim became the first state in the country to carry out such a programme for the people entitling them to state government employee benefits.
Background:
CM Chamling is the longest serving CM of the Independent India.
Sikkim:
♦ Capital: Gangtok.
♦ Chief Minister: Pawan Kumar Chamling.
♦ Governor: Shri. Ganga Prasad.
♦ National Parks: Khangchendzonga National Park.
♦ Wildlife Sanctuary: Kitam (Bird) Wildlife Sanctuary, Pangolakha  Wildlife Sanctuary, Shingba (Rhododendron)  Wildlife Sanctuary, Barsey Rhododendron  Wildlife Sanctuary. 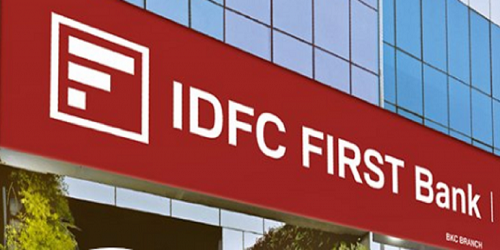 i. The change was effective from January 12, 2019 by virtue of ‘Certificate of Incorporation pursuant to change of name‘ issued by the Registrar of Companies, Chennai.
ii. The board of IDFC Bank also approved the appointment of V Vaidyanathan, founder and chairman of Capital First Ltd, as managing director and chief executive officer of the merged entity.
IDFC Bank:
♦ Headquarters: Mumbai.

US launches new innovation initiative at Raisina Dialogue, 2019
On 11th January 2019, the Global Innovation Policy Center (GIPC) of United States Chamber of Commerce launched a new innovation strategy at Raisina Dialogue, 2019 in New Delhi. The Initiative is titled as “Fair Value for Innovation”.
Key Points
i. The Initiative will examine economic underpinnings in order to enable breakthrough innovation and explore the opportunities to harness innovation capital in India and around the globe through research, advocacy, partnerships and programs.
ii. India is the first market where GIPC is launching this new innovation initiative.
iii. The Raisina Dialogue is most influential conference on geopolitics and geo-economics of India which is convened by the Observer Research Foundation and the Indian Ministry of External Affairs in New Delhi.
iv. The theme of this year’s Raisina Dialogue is “A World Reorder: New Geometries; Fluid Partnerships; Uncertain Outcomes”.
v. The inaugural address was delivered by Prime Minister of Norway H E Ms Erna Solberg.
About Norway
♦ Capital: Oslo
♦ Currency: Norwegian krone
♦ Prime Minister: Erna Solberg. Points to be Noted:
i.The literature festival was addressed by the Union Minister of State for Culture, and Tourism,KJ Alphons and Madhya Pradesh Culture Minister Vijaylaxmi Sadho on January 12, at Bharat Bhawan the multi-cultural hub in Bhopal.
The shortlist books:

Lifetime Achievement Award given to Filmmaker Buddhadeb Dasgupta by WBFJA in the 3rd Cinemar Samabartan ceremony held in Kolkata
On January 13, 2019, national award-winning filmmaker Buddhadeb Dasgupta was conferred with the Lifetime Achievement Award, in the name of late Satyajit Ray, by the West Bengal Film Journalists Association (WBFJA) in Kolkata.
i. It was given in the third edition of the ‘Cinemar Samabartan’ ceremony.
ii. As a director, he has won the National Film Award for Best Direction twice, for Uttara (2000) and Swapner Din (2005).
iii. He is also a poet and an economics professor.
About the 3rd Cinemar Samabartan:
♦ The ceremony consisted of seventeen award categories in the popular segment, eight award categories in the Technical Award segment, and a Lifetime Achievement Award.

Former Citi group executive Daniel Houghes Callahan, 62, was appointed as additional and independent director for 5 years: TCS
On January 12, 2019, Tata Consultancy Services (TCS) hired former Citi executive Daniel Houghes Callahan, 62, as an additional and independent director for 5 years.
i. With this, TCS has 11 directors, including seven independents in the expanded board.
ii. Prior to this, Callahan was a member of Citi’s operating committee until November 2018 and handled Citigroup’s technology as chief administrative officer.
iii. Callahan held senior positions in AIBM Japan, Morgan Stanley, and Credit Suisse.
TCS:
♦ Headquarters: Mumbai.
♦ Chairman: N Chandrasekaran.

SpaceX Falcon 9 rocket launches Ten Iridium communications satellites
On January 11, 2019, The SpaceX Falcon 9 launched Iridium Communications satellite comprises of 10 voice and data satellites,which is an alternative for entire fleet with a new generation of orbiters from the Vandenberg Air Force station in California.
Facts to be noted:
i. The Iridium constellation was originally developed by Iridium SSC, with first-generation satellites deployed between 1997 to 2002. The constellation’s name comes from the chemical element Iridium, which has atomic number 77.
ii .This launch was one of the eight launches that are scheduled for the Virginia-based Iridium Communications to put a total of seventy-five Iridium-NEXT satellites into Earth’s lower orbit.
iii. The Iridium NEXT satellites also carry a system by Aireon LLC for space-based air traffic surveillance over 100 percent of the globe.The Aireon system collects data automatically and in real time, even from remote areas over the world’s oceans.
About SpaceX:
♦ Headquarter:Hawthorne, California, U.S.
♦ Head:Elon Musk

352nd Prakash Utsav of Guru Gobind Singh celebrated on January 13
On January 13, 2019, the 352nd birth anniversary of the 10th Sikh Guru, Guru Govind Singh ji, was celebrated as Prakash utsav at Patna Sahib, in Bihar, the birth place of Guruji.
i. The main function was organised at Takhat Sri Harmandir Sahib Gurdwara, Patna Sahib.
ii. Guru Govind Singh ji was the creator of Khalsa Panth.
iii. The 10th Sikh Guru was a spiritual leader, philosopher, poet and master warrior. He is considered as the eternal guru by his followers because of his contribution to Sikhism.
PM released commemorative coin on Sikh Guru Gobind Singh in New Delhi
On January 13, 2019, Prime Minister Narendra Modi released a commemorative coin of 350 rupees on Guru Govind Singh ji in New Delhi on the eve of 352nd birth anniversary of the 10th Sikh Guru. 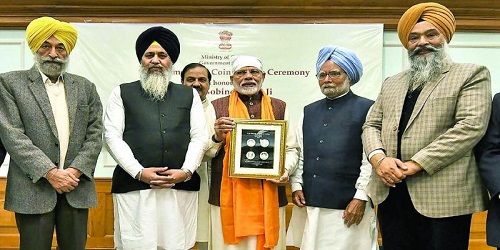 i.  He also announced that the Kartarpur corridor located in Punjab, Pakistan, is being built for devotees to go visit and pray.
ii. Including celebrations of the 352nd Prakash Utsav of Guru Gobind Singh all over the country, the centre would also celebrate Guru Nanak Dev’s 550th birth anniversary.
iii. Earier in November 23, 2018, the centre started its year-long celebrations to commemorate 550th Birth Anniversary of Shri Guru Nanak Dev Ji.
About Kartarpur corridor:
♦ On November 22, the cabinet chaired by PM Narendra Modi approved the corridor from Dera Baba Nanak to the Pakistan border.
♦ It involves a road link for Sikh pilgrims to visit the famous Kartarpur Sahib Gurdwara in Pakistan.
♦ The 16th century Gurdwara Darbar Sahib Kartarpur on the banks of the river Ravi is important for Sikhs as Guru Nanak Dev, their main guru, spent 18 years here. The gurudwara was established by the first Sikh Guru in 1522.