On 7th January 2019, Norway Prime Minister Erna Solberg arrived in New Delhi for a three-day state visit to India at the invitation of the Prime Minister of India, Shri Narendra Modi. This made her the first foreign leader and head of the government to visit New Delhi in 2019. 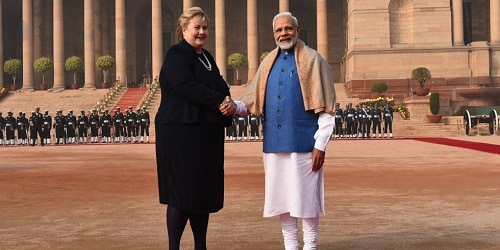 About Blue Economy:
The blue economy is the “sustainable use of ocean resources for economic growth, improved livelihoods, and jobs while preserving the health of ocean ecosystem.” It supports all of the United Nations’ Sustainable Development Goals (SDGs), especially SDG14 ‘life below water’, and recognises that this will require ambitious, co-ordinated actions to sustainably manage, protect and preserve our ocean now, for the sake of present and future generations.

About Sustainable Development Goals (SDGs):
The Sustainable Development Goals (SDGs), otherwise known as the Global Goals, are a set of 17 global goals in the form of a universal call to end poverty, protect the planet and ensure that all people enjoy peace and prosperity. They are set by the United Nations in areas such as climate change, economic inequality, innovation, sustainable consumption and peace and justice. The SDGs came into effect in January 2016, and they will continue to guide United Nations Development Programme (UNDP) policy and funding until 2030.

Norwegian Prime Minister will deliver the Inaugural address at the Raisina Dialogue
From 8th to 10th January 2019, the 4th edition of the Raisina Dialogue, India’s flagship annual geopolitical and geostrategic conference kicked off in New Delhi. The event was organised by Ministry of External Affairs in partnership with Observer Research Foundation.