We are here for you to provide the important Current Affairs February 26 2019, which have unique updates of all daily events from all newspapers such as The Hindu, The Economic Times, PIB, Times of India, PTI, Indian Express, Business Standard and all Government official websites. 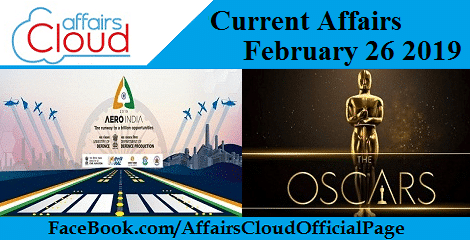 Overview of the 12th Aero-India 2019 held in Bangalore
Defence Minister Smt Nirmala Sitharaman inaugurated the 12th biennial edition of International Aerospace and Defence Exhibition, the Aero India 2019 on 24th February 2019 at the Air Force Station Yelahanka in Bengaluru. The theme of the event was “‘Runway to a Billion Opportunities” 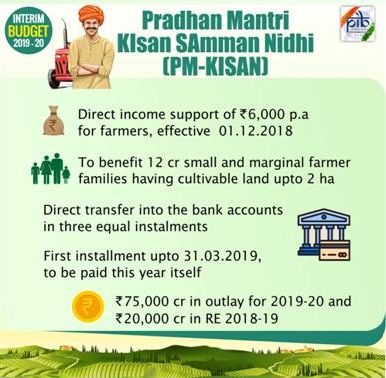 i. The scheme will provide Rs 6,000 per year to small and marginal farmer families having combined land holding/ownership of upto 2 hectares.
ii. The amount will be given in three installments of Rs 2,000 each and will be transferred directly to the bank account of the beneficiaries through Direct Benefit Transfer, ensuring transparency in the entire process and saving time for the farmers.

33rd GST Council meeting chaired by Arun Jaitley in New Delhi
Union Finance Minister, Shri Arun Jaitley, chaired the 33rd Goods & Services Tax (GST) Council held in New Delhi which was attended by the Finance Ministers of various States and Union Territories.
Recommendations of the 33rd GST Council
Although real estate sector is one of the largest contributors to the national GDP and provides employment opportunity to large numbers of people, there are reports of slowdown in the sector and low off-take of under-construction houses which needed to be addressed. In order to boost the residential segment of the real estate sector, following recommendations were made:
i. GST rate:

Advantages of the recommendations i. Recognized as an important public health problem across the world Viral Hepatitis has caused 1.34 million deaths globally in 2015 according to World Health Organisation (WHO).
ii. In India, it is estimated that there are 4 crore people suffering from Hepatitis B and 0.6-1.2 crore people suffering from Hepatitis C.
iii. The aim of the programme is to combat hepatitis and achieve countrywide elimination of Hepatitis C by 2030 and is also in line with the country’s global commitment towards achieving Sustainable Development Goal (SDG) 3.3 made at the 69th World Health Assembly.
iv. India is one of the few countries in the world to roll out management of Hepatitis B and Hepatitis C in a public health approach and offer free diagnostics and drugs lifelong to its beneficiaries.

Madhya Pradesh Government launched 100-day employment scheme for youths
Madhya Pradesh Chief Minister Kamal Nath launched the State Government’s flagship scheme ‘Mukhyamantri Yuva Swabhiman Yojana’ that guarantees 100 days of employment every year to urban youth from Economically Weaker Sections(EWS).
i. Under the scheme, Rs 4,000 stipend per month during 100 days of period, would be given to the youth and they will also be given skill development training in order to become independent.
ii. Each youth enrolled under the scheme will get total Rs 13,500 for the 100 days period.
iii. Only those youths, whose family’s annual income is less than Rs 2 lakh and who are in the age group of 21-30 years, are eligible for the scheme.
iv. 1.5 lakh urban youths have so far registered themselves for this scheme.

2019 Passport Index: India at 67th & UAE in Top
The Passport Index of 2019, which ranks almost 199 countries in the world based on their Visa-Free Scores and their ranking according to the UNDP human development index, showed that Indian passport has steadily strengthened in a period of 5 years from rank 77 in 2015 to 67 in 2019.
i. 25 countries allow visa-free entry to Indian passport holders, whereas 39 countries offer visa-on-arrival.
ii. The Tourism Ministry for India is also offering e-tourist visa facilities to 166 countries, by making several amendments in the e-visa regime of the country in order to make this process more tourist friendly.

Government released draft e-commerce policy
The Government of India released a new 41-page draft National E-Commerce Policy that provides setting up a legal and technological framework for restrictions on cross-border data flow and also laid out conditions for businesses regarding collection or processing of sensitive data locally and storing it abroad.Title of draft e-commerce policy is “Draft National e-Commerce PolicyIndia’s Data for India’s Development”.It has been released by Department for Promotion of Industry and Internal Trade (DPIIT). 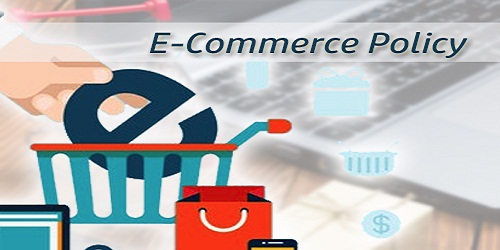 i. The framework would be created to provide the basis for imposing restrictions on cross-border data flow from specified sources including data collected by Internet of Things (IoT) devices installed in public space, and data generated by users in India by various sources, including e-commerce platforms, social media, search engines.
ii. 6 broad issues of the e-commerce ecosystem are addressed in the draft:

iii. According to the draft:

Overview Of The 91st Academy Awards (Oscars 2019)
The 91st Academy Awards (commonly known as Oscars), presented by the Academy of Motion Picture Arts and Sciences (AMPAS), honored the best films of 2018, on February 24, 2019, at the Dolby Theatre in Hollywood, Los Angeles, California.The ceremony was produced by Donna Gigliotti and Glenn Weiss.

Scientists discovered exo planet named ‘hot Earth’ that orbits its star in just 11 hours
A Team of Scientists from Harvard-Smithsonian Centre for Astrophysics had discovered a exo planet named ‘hot Earth’ that orbit’s its dwarf star in eleven hours by using the data of NASA’s planet-hunting satellite Transiting Exoplanet Survey Satellite (TESS).
Exoplanet ‘hot Earth’ is rocky in composition and only about fifty light-years away from its star.The planet has a radius of about 1.3 Earth-radii.

Himachal Pradesh government declared Monkeys as vermin
Monkey’s are declared as vermin by the Himachal Pradesh government again,in 11 districts,91 tehsils and sub-tehsils for the next one year.Previously,monkeys were declared as vermin in 38 tehsils and sub-tehsils of 10 districts in the year 2016 and which was further extended to next year on December 20, 2017.
About Vermin:
Vermin are pests or wild animals that are believed to be harmful to crops, farm animals, or game, or which carry disease. FIFA banned Chelsea for breaching transfer rules
The Fédération Internationale de Football Association (FIFA)’s disciplinary committee has banned the English Premier League club Chelsea from signing players in the next two transfer windows, after the club was found to have breached FIFArules relating to international transfer and registration of players under the age of 18.
i.It fined Chelsea with USD 599,535 and gave 90 days to regularise the situation of the minor players concerned.
About FIFA
♦ President – Gianni Infantino
♦ Headquarters – Zurich, Switzerland

Rashid Khan became first bowler in T20I history to pick 4 wickets in 4 balls
Afghanistan cricket team’s leg spinner, Rashid Khan, became the first bowler to take out 4 wickets in 4 balls in Twenty20 Internationals (T20Is) during the third and final T20I against Ireland in Dehradun.
i. He also became the seventh bowler to pick up a hat-trick in T20Is.
ii. Afghanistan won T20I series by a margin of 3-0 against Ireland.
About Afghanistan
♦ Capital – Kabul
♦ Currency – Afghan Afghani
♦ President – Ashraf Ghani