We are here for you to provide the important Current Affairs December 26 2018, which have unique updates of all daily events from all newspapers such as The Hindu, The Economic Times, PIB, Times of India, PTI, Indian Express, Business Standard and all Government official websites. 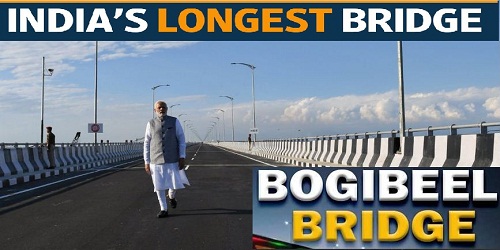 i. The 4.94 km structure was built at a cost of Rs. 5900 crores by Indian Railways.
ii. It is India’s only fully welded bridge for which european codes and welding standards were adhered to for the first time in the country.
iii. It is also Asia’s 2nd longest rail-and-road connector having a life span of 120 years.
iv. It will reduce travel time from Assam to Arunachal Pradesh to four hours and will cut out the detour of over 170 km via Tinsukia. It will also cut down train travel between Delhi and Dibrugarh by three hours.
v. Its initial budget was about Rs. 3,200 crore and had an original planned length of 4.31 km.
Physical Features:
i. It is a double-decker bridge having two railway lines on the lower deck and a three-lane road on the upper.
ii. The three road lanes of the bridge can act as three landing strips for the Air Force
iii. It has been designed like a bridge that links Sweden and Denmark.
Other News:
PM Modi also flagged off a train – the Tinsukia-Naharlagun Intercity Express, which will run five days a week.
Background:
The foundation stone of the project was laid by former Prime Minister HD Deve Gowda on January 22, 1997.
Its work began on April 21, 2002 under the Atal Bihari Vajpayee-led government.
Assam:
♦ Capital: Dispur.
♦ Chief Minister:  Sarbananda Sonowal.
♦ Governor: Jagdish Mukhi.
♦ National Parks: Kaziranga National Park, Manas National Park (UNESCO Natural World Herigate Site), Orang National Park, Dibru-Saikhowa National Park.
♦ Airports: Lokpriya Gopinath Bordoloi International Airport, Dibrugarh Airport, Jorhat Airport, Tezpur Airport, Silchar Airport. Objective:
It is celebrated to commemorate the birth of ‘Srimad Bhagwat Gita’, the sacred scripture that had its inception on the first day of the famous 18-day battle in the Mahabharata.
Key Points:
i. The event was organized by the following:

iv. 200 famous painters from across the country to draw paintings on the walls of Kurukshetra on the theme of the Mahabharata under the ‘paint-the-wall’ competition.
Mauritius to organise Gita festival in Feb:
On completion of the International Gita Mahotsav, acting President of Mauritius Paramasivum Pillay Vyapoory announced that his country would organise a Gita festival on February 2019.
Haryana:
♦ Chief Minister: Shri. Manohar Lal .
♦ Governor: Shri. Satyadeo Narain Arya.

30-bedded 10th Naval Hospital Ship INHS Sandhani commissioned at Karanja Naval Station, Mumbai, Maharashtra: Indian Navy
On December 24, 2018, the Indian Navy commissioned its 10th Naval Hostipal Ship named ‘INHS Sandhani’ at the Naval station Karanja in Uran near Mumbai, Maharashtra.
i. The 30-bedded multi-speciality hospital was unveiled by Preeti Luthra, President of NWWA (Navy Wives Welfare Association), Western Region.
ii. It has a team of specialists in the fields of medicine, surgery, gynaecology, paediatrics, anaesthesia and dental sciences.
Background:
It had its origins from being a 16-bedded a small primary health centre in 1955.
It got official sanction to be expanded in to a multispecialty hospital by the Ministry of Defence in September 2016.
Indian Navy:
♦ Chief of Naval Staff: Admiral Sunil Lanba.
♦ Vice-Chief of Naval Staff: Vice Admiral Ajit Kumar.
♦ Headquarters: New Delhi.

24th meeting of Conference of Parties (COP-24) held in Katowice, Poland
From 2nd December 2018 to 14th December 2018, the annual meeting of United Nations climate change conference (COP24) was held in the Polish city of Katowice, with the goal of finalising the rules for implementation of the Paris Agreement on climate change under the Paris Agreement work programme (PAWP).

First meeting of the Follow-up Committee between India, Afghanistan and Iran held in Iran
On December 24, 2018, the first meeting of the Follow-up Committee for implementation of the Trilateral Chabahar Agreement between India, Afghanistan and Iran was held in the port city of Chabahar in Iran.
i. The meeting was held at the level of Joint Secretary or Director General.
Following happened during the meeting:

RBI contemplated cooling-off period for its retired top officials to 1 year for Directorial position and 3 years for CEO and Chairmanship
On December 23,2018, the central bank of India,Reserve Bank of India (RBI) issued norms providing guidelines of cooling-period before a retired RBI top official starts to hold top ranking position in other entities.
i. According to RBI, any retired official intending to take over the position of CEO or Chairman of any other entity would have to wait for 3 years.
ii. However,if the official is to join as a director of the company’s board, he/she would have to wait for a period of 1 year.

Union Home Minister released List of Top 10 Performing Police Stations Across India in Gujarat
On December 22, 2018, Union Home Minister Rajnath Singh released the list of top 10 performing police stations across the nation.
i. The list was announced in the 3-day Inaugural Session of the DGPs or IGPs Conference in Gujarat.
ii. The list was prepared by the Intelligence Bureau (IB).
iii. The police stations across the country were checked for various parameters like infrastructure, detection of registered crime cases and friendly relations with the public.
About the rankings:
i. The top three police stations in India for 2018 are Kalu (Bikaner, Rajasthan), Campbell Bay ( Andaman & Nicobar Islands) and Farakka (Murshidabad, West Bengal).
ii. Other police stations have been ranked as follows:

P V Bharathi appointed MD and CEO of Corporation Bank; other appointments made by Ministry of Personnel
On December 25, 2018, the Ministry of Personnel appointed P V Bharathi as the MD and CEO of Corporation Bank, effective from February 1, 2019 till March 31, 2020 – the date of her superannuation.
i. Bharathi is presently the Executive Director of Canara Bank.
ii. Additionally, Birupaksha Mishra and Balakrishna Alse S have been appointed as executive directors in Corporation Bank and Oriental Bank of Commerce, respectively.
iii. Mishra is currently the General Manager, Central Bank of India and Balakrishna is GM, Corporation Bank.
iv. Also, K Ramachandran has been appointed as the Executive Director of Allahabad Bank from the current post of General Manager.
v. Ramachandaran will hold office up to the date of his superannuation, which is June 30, 2021.
Department of Personnel and Training (DOP&T):
♦ Under the Ministry of Personnel, Public Grievances & Pensions.
♦ Minister of State: Dr. Jitendra Singh.

Ex-IES Officer Sangeeta Verma appointed as third CCI Member: CCI Chairperson
On December 24, 2018, the Competition Commission of India (CCI) announced the appointment of Sangeeta Verma as its member in its 4-member council including the chairperson.
i. Verma is a former Indian Economic Services (IES) officer and had been appointed for a period of 5 years.
ii. The other members of the council include:

US researchers made world’s smallest tic-tac-toe game board with DNA
On 23rd December 2018, researchers from California Institute of Technology, United States of America (USA) made world’s smallest tic-tac-toe game board using dynamic DNA origami tiles-microscopic organic structures that can be programmed to transform into predesigned patterns.
i. Using this technique they fashioned a microscopic game of tic-tac-toe in which players place their X’s and O’s by adding special DNA tiles to the board.
ii. They had chosen to make the world’s smallest version of the Italian polymath Leonardo Da Vinci’s iconic painting Mona Lisa.
iii. DNA consists of a backbone and four types of molecules known as bases. These bases are adenine, guanine, cytosine, and thymine. Shiffrin first woman to reach 50 World Cup wins with Courchevel victory
On 22nd December 2018, American Mikaela Shiffrin became the youngest woman to win 50 World Cup ski races with victory in the slalom in the French Alps.
She finished 0.29 sec ahead of Slovakia’s Petra Vlhova and 0.37sec ahead of Sweden Frida Hansdotter in third place to win in Courchevel victory.
Key points
i. She became the first woman to secure a half century of race victories.
ii. Shiffrin won giant slalom by overcoming a 0.08sec deficit and blizzard-like conditions and victory was her fourth consecutive win in the French resort.
iii.  Shiffrin leads the overall standings on 889 points after 13 out of the 38 events. 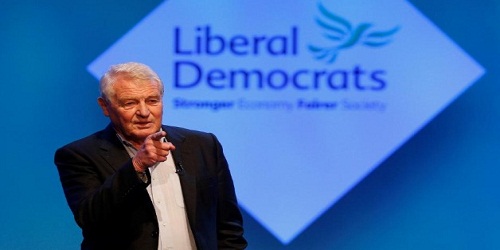 i. He was the longest serving leader of the Lib Dems in its history where he led from 1988 to 1999.
ii. He had also served with the Royal Marines for 13 years.

Bengali poet Nirendranath Chakraborty dead in WestBengal
On 25th December 2018, famous Bengali poet Nirendranath Chakraborty died following a cardiac arrest in Kolkata, Wet Bengal at the age of 94.
i. He was born in 1924 and His first book of poems ‘Nil Nirjone’ was published in 1954.
ii . He won the Sahitya Akademi award in 1974 for his poem ‘Ulanga Raja’ (naked king).
iii. He was also a recipient of ‘Ananda Purashkar’ and was the president of Paschimbango Bangla Akademi. He was also conferred with the Bangobibhusan honour in 2017 by West Bengal government.
iv.Amalkanti Roddur Hote Cheyechhilo’ (Ammalkanto wanted to be the sunshine), ‘Kolkatar Jishu’ (Christ of Kolkata) and ‘Pahari Bichhe’ (Mountain scorpion) are considered his two other cult poems. i. Union Minister of State for Home Affairs, Kiren Rijiju, was the chief guest at the event.
ii. He awarded President’s Police Medal for distinguished service and Police Medal for meritorious service to recipients.
iii. He also released the 55th Anniversary issue of ‘SSB Samachar’.
iv. In his address, he announced that Government has approved creation of 650 posts for the intelligence set-up of Sashastra Seema Bal.
v. The SSB parade was attended by the Chief of Nepal Armed Police Force Shri Shailendra Khanal, Deputy Chief of Mission, Bhutan, Shri Sonam Tobgay, DGs of CAPFs and other dignitaries.
Background:
SSB is the first Border Guarding Force of the Nation to induct women in the year 2007 for border guarding duties.
♦  Director General, SSB: Shri S S Deswal.

Former PM Bharat Ratna Atal Bihari Vajpayee’s 94th birthday celebrated as Good Governance Day on 25th December,2018
On December 25, 2018, the 94th birth anniversary of Former Prime Minister Bharat Ratna Atal Bihari Vajpayee was celebrated as Good Governance Day across the country.
i. The day was established in 2014 to honour the Bharat Ratna by fostering awareness among the people on accountability in Governance and Government.
As part of the celebrations, different ministries and state governments did the following:

About Sadaiv (always) Atal memorial:
i. The memorial is enclosed by nine bas-relief walls having inscriptions of poetries penned by Vajpayee.
ii. Spread over 1.5 acres of land, the memorial was constructed by the Central Public Works Department (CPWD) at a cost of Rs 10.51 crore.
iii. It was funded by the Atal Smriti Nyas Society.
iv. The land was made available for the memorial at the Rashtriya Smriti Sthal by the Union Housing and Urban Affairs Ministry.
v. The memorial will be managed by a trust headed by Lok Sabha Speaker Sumitra Mahajan.
Other News:
i. Prime Minister Narendra Modi paid his tributes to Pt. Madan Mohan Malaviya on his 157th birth anniversary.