From 2nd December 2018, the 24th meeting of Conference of Parties (COP-24) to the United Nations Framework Convention on Climate Change (UNFCCC) also known as ‘Katowice Climate Change Conference’ was held at Katowice, Poland with an aim to finalize guidelines for implementation of the Paris Agreement adopted in 2016. The event concludes on 14th December 2018. 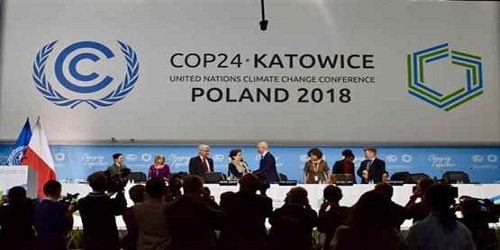 Major Sessions held in the conference:

Vision of the COP24 meeting:

About United Nations Framework Convention on Climate Change (UNFCCC):
UNFCCC a “Rio Convention”, is an international environmental treaty adopted on 9th May 1992 and opened for signature at the Earth Summit in Rio de Janeiro from 3rd to 14th June 1992. It entered into force on 21st March 1994 with 197 ratifies till date.

Gujarat’s women group gets UN award
On 11th December 2018, a Gujarat women’s group got a United Nations Framework Convention on Climate Change (UNFCCC) award for women’s leadership with low cost and sustainable technology to tackle storms, at a side event of the on-going 24th Conference of the Parties (COP24) in Katowice, Poland.

Operating guidelines for Paris Agreement adopted at COP24
On 15th December 2018, delegates from 196 countries agreed on a rule book to govern the implementation of the 2015 Paris climate treaty during the on-going 24th Conference of the Parties (COP24) organised by the United Nations Framework Convention on Climate Change (UNFCCC) in Katowice, Poland

About Conference of the Parties (COP):
Conference of the Parties (COP) is the supreme body of the UNFCCC Convention. It consists of the representatives of the countries that have ratified the UNFCCC Convention. Countries that have ratified the convention are called Parties to the Convention. The COP holds its sessions every year and takes decisions which are necessary to ensure the effective implementation of the provisions of the Convention and regularly reviews the implementation of these provisions.