We are here for you to provide the important Current Affairs December 25 2018, which have unique updates of all daily events from all newspapers such as The Hindu, The Economic Times, PIB, Times of India, PTI, Indian Express, Business Standard and all Government official websites. 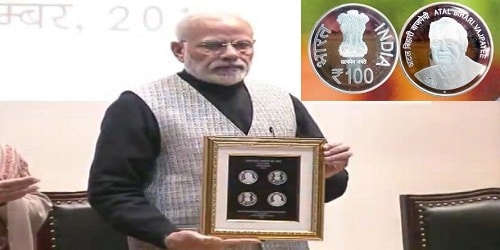 i. This Rs 100 currency will be the highest denomination in the form of a coin and comes weeks after the government introduced Rs. 200 denomination notes for the first time.
ii. The coin was released on commemoration of the birth anniversary of the late Pm on December 25, which is also celebrated as ‘Good Governance Day’.
iii. Following are the features of the coin:

iv.He was the first ever person from the BJP to have become the nation’s Prime Minister. Vajpayee served as Prime Minister thrice -briefly in 1996, and then for two terms between 1998 and 2004. 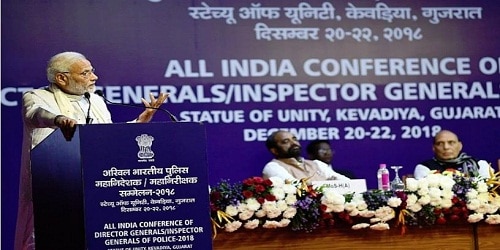 Key Points:
i. A one stop shop on all cyber related issues, whether it is cybercrime or cyber security, the Cyber Coordination Centre is focused on improving cyber security in the country and on preparing the Police forces to prevent and investigate cybercrimes and financial frauds.
ii. It would also act as bridge between law enforcement agencies on the one hand, and academia and private cyber security professionals on the other.
iii. Prime Minister Narendra Modi also released a commemorative stamp on the National Police Memorial on the occasion besides releasing a special issue of Indian Police Journal on Police martyrdom, published by the Bureau of Police Research and Development (BPR&D).
PM announces Sardar Patel Award for National Integration
On 23rd December 2018, during the concluding session of the 3-Day Conference of Director Generals of Police, Prime Minister Shri Narendra Modi announced the institution of Sardar Patel Award for National Integration on the pattern of Padma Awards.
Key Points:
i. The award which will be conferred annually and would be open to every Indian who has contributed to national unity in any manner.
ii. The inspiration for formation of award is drawn from India’s first Home Minister Sardar Patel’s contribution towards National unity after Independence.
About Ministry of Home Affairs:
♦ Minister: Rajnath Singh
♦ Ministers of state: Hansraj Gangaram Ahir, Kiren Rijiju
♦ Home Secretary:  Rajiv Gauba
♦ Headquarters: New Delhi
About Bureau of Police Research and Development (BPR&D):
♦ Director General:  Dr.A.P.Maheshwari
♦ Headquarters: New Delhi 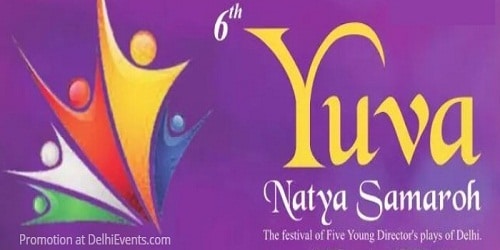 Key Points:
i. It is a theatre festival of five young directors with some of the best modern, mythological as well as Parsi style drama.
ii. The festival will start with the famous and well-discussed story by Mithileshwar titled Babuji and directed by Rajesh Singh while the Parsi play Safed Khoon directed by Samiruddin (Javed Sameer), will be presented on the last day of the festival.

India’s first music museum to be set up in Thiruvaiyaru, Tamil Nadu
On December 23, 2018, the State Minister for Culture and Tamil Development Shri K Pandiarajan announced setting up of the country’s first music museum in Thiruvaiyaru, Tamilnadu.
i. The venue chosen for the project is the birth place of Saint Tyagaraja, one of the Trinities of Carnatic music.The other two of the Trinity are Muthuswami Dikshitar and Syama Sastri.
ii. The museum will be set up with assistance from the Central government.

PNB Rupay Card: special card for Kumbh Mela launched by PNB and UP government
On December 23, 2018, State-owned Punjab National Bank (PNB) in collaboration with Uttar Pradesh government launched a special card called PNB Rupay card, for Kumbh Mela 2019.
i.  It is aimed to create a model for digitization at this edition of Kumbh Mela for convenient and hassle-free transactions for the participating 12 crore devotees.
ii. This product can be used even in absence of internet.

DIPP raises angel tax issue with revenue dept
On 19th December 2018, the Department of Industrial Policy & Promotion (DIPP) which works under Ministry of Commerce and Industry, stated that the DIPP has taken up the issue of Angel tax faced by Start Ups in India with the Department of Revenue (DoR), Ministry of Finance.
Key Points:
i. Angel tax is a tax that a start-up has to pay on the investment it has received from an angel investor above its “fair market valuation”.Angel tax is a 30% tax levied on investments made by external investors in a company or startup.
ii. Angel investor is the one who funds a startup when it is taking baby steps to establish itself in the competitive market and normally, about 300-400 startups get angel funding in an year.
iii. In April, this year, DIPP in consultation with the DoR put in place a mechanism to grant exemption from the provisions of Section 56(2)(viib) of the Income Tax (I-T) Act which provides for taxation of funds received by an entity to genuine investors in recognised startups.
iv. The move by DIPP to raise the concern with DoR came after many startups in Bengaluru and Mumbai raised the issue on social media with Commerce and Industry Minister Suresh Prabhu after they have reportedly received notices from the tax department to clear taxes on the angel capital raised by them.
About Ministry of Commerce and Industry:
♦ Minister: Suresh Prabhu
♦ Minister of State: C.R.Chaudhary
♦ Headquarters: New Delhi
About Ministry of Finance:
♦ Minister: Arun Jaitley
♦ Minister of State: Shiv Pratap Shukla, Pon Radhakrishnan
♦ Finance Secretary: Ajay Narayan Jha i. After this he became the 3rd man in history to secure the 5th world title.
ii. This was a part of vote given by the F1 management for the first time among 17 of the 20 drivers participating in the event.
iii. He was followed by Max Verstappen in the second place, Fernando Alonso in the third place.
iv. The top 5 was closed off by Sebastian Vettel (4th) and Daniel Ricciardo in the 5th place. This was the highest number of awards bagged by a single organisation.
i.It took part in 3 categories namely, railway stations, hospitals and institutions, out of the five major categories.
ii.The awards are as follows:

iii.10 awards for railway stations were given in the subsector in which,

iv. In the hospitals sector, the following got the 3 awards:

About the award:
i. These awards were given by the Bureau of Energy Efficiency (BEE) , Ministry of power, Government of India.
ii. The purpose of the award was to honour Institutions for adopting Energy Efficiency measures for reducing energy consumption and the cost.
Ministry of Railways:
♦ Union Minister: Shri. Piyush Goyal.
♦ Minister of State: Shri. Manoj Sinha, Shri. Rajen Gohain.
♦ Chairman of Indian Railways Board: Ashwini Lohani. 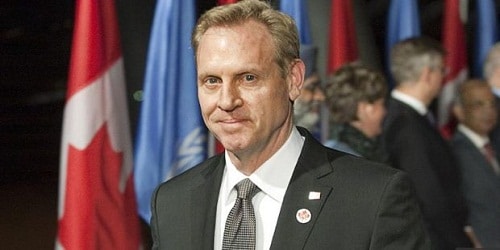 Key Points:
i. Earlier Jim Mattis, had announced his resignation on 21st December 2018 due to strong policy differences with Mr Trump especially on Trump’s Syria troop with drawl move but offered to stay on for two months in order to facilitate a smooth transition.
ii. Mr Shanahan, is a former executive at the aerospace giant Boeing, joined the Pentagon in July 2017 after Mr Trump nominated him and was reportedly a vocal supporter of the president’s plan to establish a sixth branch of the armed forces, known as the “space force”.

HD219134 b: Shimmering ‘super-Earth’ in constellation Cassiopeia discovered
On December 22, 2018, located 21 light years away us in the constellation Cassiopeia, a shimmering “super-Earth”, five times the mass of Earth, dubbed as HD219134 b was discovered.
i. Unlike the Earth, however, it most likely does not have a massive core of iron, but is rich in calcium and aluminium alongside magnesium and silicon.
ii. It shimmers red to blue like rubies and sapphires, because these gemstones are aluminium oxides which are common on the exoplanet.
iii. According to the researchers it is one of three candidates likely to belong to a new exotic class of exoplanets. The other two exoplanets studied were 55 Cancri e and WASP-47 e.
iv. The study was published in the journal Monthly Notices of the Royal Astronomical Society: Letters.

Indonesia hit by Volcanic Tsunami
On 22nd December 2018, a tsunami following a volcanic eruption hits the Sunda Strait between Java and Sumatra islands of Indonesia without any early warning causing heavy damage to the holiday makers and residents of coastal areas.
Key Points
i. The tsunami was caused by an underwater landslide when a chunk of the volcanic Anak Krakatau island slipped into the ocean.
ii. The tsunami was triggered by a volcano rather than earthquake due to which early warning could not be generated.
iii. Indonesia do not have an early warning system for landslides or volcanic eruptions. It was announced by Indonesia’s Disaster agency said that it will have to create a new tsunami early warning system.
iv. In the tsunami, more than 373 people were killed, thousands were injured and many buildings were heavily damaged.
About Indonesia
♦ Capital: Jakarta
♦ Currency: Indonesian rupiah
♦ President: Joko Widodo

Five weightlifters banned after 2012 Olympic tests reanalyzed
On 24th December 2018, The International Weightlifting Federation announced in Paris that five weightlifters have been provisionally suspended after the reanalysis of weightlifters’ urine samples collected during 2012 London Olympics.
The Weightlifters who are banned are Ukrainian Oleksiy Torokhtiy, Uzbek Ruslan Nurudinov both where the participants of 105 kg Category, Valentin Hristov of Azerbaijan who participated in 56 Kg Category, Armenia’s Meline Daluzyan and Belarusian Mikalai Novikau. 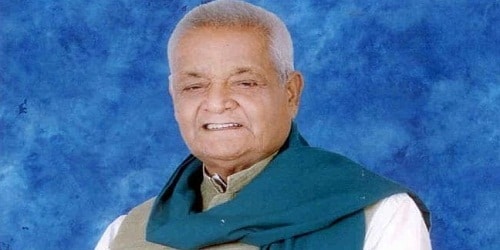 i. Jai Narain Prasad Nishad was a Member of Parliament (MP) from the Muzaffarpur constituency in Bihar.
ii. He served as the Union Minister of state, Environment and Forests (Independent Charge) during 1996-97. 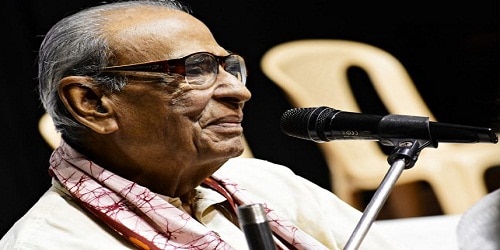 i. Dwijen Mukhopadhyay was known for his rendition of ‘Jagoo Durga’ on All India Radio  and he was honoured with Padmabhushan and Banga Bibhusan.
ii. He was born in 1927 and recorded over 1000 songs of Tagore during his lifetime.

Former Mumbai Mayor and Padma Shri Nana Chudasama dies at 85 in Maharashtra
On 23rd December 2018, Former Mumbai Mayor and a 2005 Padma Shri awardee Nana Chudasama died at the age of 85 after a brief illness in Mumbai,Maharashtra.
Key Points:
i. Born in the Saurashtra region of Gujarat, Nana Chudasama, a jurist and a social worker, was the founder of non-governmental organizations Giants International, I Love Mumbai, National Kidney Foundation, and Forum Against Drugs and AIDS.
ii. Chudasama was also known for putting up banners in Mumbai’s Marine Drive area for decades carrying expressive messages about national and international stories of importance.

Veteran CPI (M) leader Nirupam Sen passes away in West Bengal
On 24th December 2018, Veteran leader of CPI (M) (The Communist Party of India (Marxist)), Shri Nirupam Sen who had served as the Commerce and industry minister of West Bengal passed away at a city Hospital in Kolkata,West Bengal following a cardiac arrest at the age of 72.
i. Nirupam Sen is credited as the architect of West Bengal’s Industrial drive during the Left Front rule.
ii. He was a three-time Member of the Legislative Assembly (MLA) from Bardhaman Dakshin Constinuency of West Bengal.

National farmers’ day on 23rd December
On 23rd December 2018, National Farmer’s Day (NFD) was celebrated throughout the country to acknowledge the role of farmers in India’s socio-economic development and to mark the birth anniversary of Indian farmer’s leader and 5th Prime Minister of India Shri Chaudhary Charan Singh.
Key Points:
i. This day which is also observed as KisanDiwas is celebrated across the nation every year with the focus on the upliftment of the status of farmers.
ii. On this occasion Yogi Adityanath, Chief Minister of Uttar Pradesh unveiled a statue of Sri Chaudhary Charan Singh in Ghaziabad and addressed a public meeting and announced the allocation of Rs. 325 crore for the development of the city and rural areas.

i. The Minister of State for Consumer Affairs, Food and Public Distribution and Commerce & Industry, Shri C. R. Chaudhary presided over the event.
ii. Following important announcements were made in the event: