We are here for you to provide the important Recent and Latest Current Affairs April 9 2019, which have unique updates of all daily Latest Current Affairs 2019 from all newspapers such as The Hindu, The Economic Times, PIB, Times of India, PTI, Indian Express, Business Standard and all Government official websites. 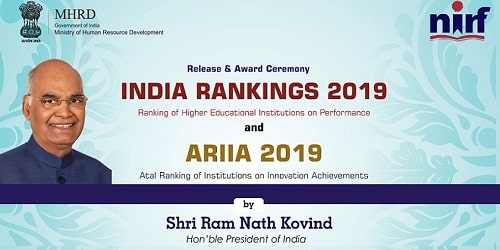 The rankings are as follows:


i.The first NIRF ranks were released in 2016.
ii.This is the fourth edition of the NIRF rankings.
iii.The parameters for the ranking  were Teaching, Learning and Resources,Graduation Outcomes, Research and Professional Practices, Outreach and Inclusivity, and Perception.
About ARIIA rankings 2019:
♦ This is the first edition of ARIIA Ranking.
♦ IIT Madras was the best institute among top 10 government institutes.
♦ The parameters are based on Infrastructure and awareness, Budget and Funding support, ,Promotion and supporting Entrepreneurship, Awareness and Promotion of idea generation, Intellectual Property Generation, Learning methods, and Governance.

NGT forms a new body to examine alleged erosion of Yamuna floodplain in Sonipat
On 8th April 2019, National Green Tribunal established a committee to examine the alleged erosion of Yamuna floodplain due to movement of heavy vehicles in Sonipat district in Haryana.
i. NGT Chairperson Justice Adarsh Kumar Goel constituted a three person body, comprised of director of the Mines and Geology Department,member secretary of the Haryana State Pollution Control Board and principal secretary of the Haryana Irrigation.
ii. A Haryana resident, Krishnen Chander, filed a plea that allowing heavy vehicles in the embankments of the Yamuna river ruining the ecology in Sonipat district.
About NGT:
♦ Established: 2010
♦ Enacted by: Parliament of India
♦ composition Method : Environmental law Tribunal 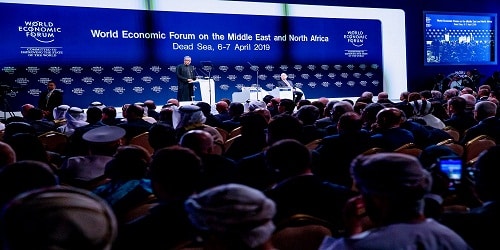 Key Points:
i. More than100 start-ups from Arab region have participated in the ceremony and discussed with industry and government leaders about the future of their industries during the two-day event.
ii. The event witnessed a lot of effective talks on projects to improving social as well as economic life of 400 million population of the MENA region.
About World Economic Forum:
♦ Headquarters :Cologny,Switzerland
♦ Chairman : Klaus Schwab

London becomes first city to implement 24×7 pollution charge zone
On 8th April, 2019, London became the first city in the world to implement a Ultra Low Emission Zone (ULEZ) for 24×7 hours a week, inside which vehicles will have to meet tough emissions standards. 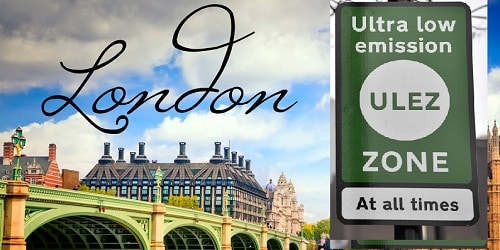 Key points:
i. This zone aims to reduce toxic air pollution and protect public health.
ii. Motorists who drive into the zone in a vehicle that does not meet the new emission standard will have to pay a daily charge.
About UK
♦ Capital: London
♦ Currency: Pound Sterling
♦ PM: Theresa Mary May 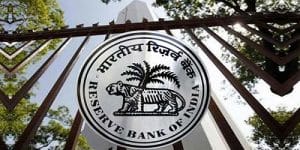 Key Points:
i. The guidelines are based upon the recommendations of the “Committee on Currency Movement” (CCM) chaired by DK Mohanty, which was constituted by RBI in 2016.
ii. In this guideline, those who situated in the hilly areas should have a processing capacity of 2.1 lakh pieces of banknotes per day.
iii. The new chests shall maintain Chest Balance Limit (CBL) of Rs 10 billion or Rs 1,000 crore.
About Reserve Bank of India
♦ Governor: Shaktikanta Das
♦ Headquarters: Mumbai
♦ Subsidiary: National Housing Bank 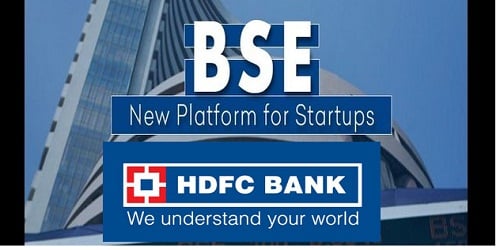 India retains top spot with largest remittances globally, amounting to $79 in 2018: World Bank
i. According to World Bank’s Migration and Development Brief; with the Indian diaspora sending 79$ billion back to their home country, India retained its position as the world’s top recipient of remittances in 2018.
ii. India was followed by remittances of:

Centre meets Fiscal Deficit of 3.4% in 2018-2019
India has met the revised fiscal deficit target of 3.4% of gross domestic product in fiscal year 2018-2019. Target has been achieved by cuts in state spending and higher borrowings from small savings funds.
Key points
i. Centre has missed the tax collections target by over 1 trillion rupees which includes around 500 billion rupees shortfall in income tax receipts.
ii. GST collections has touched Rs 1.06 lakh crore in March and the gross GST revenues has achieved the target of Rs 11.47 lakh crore. 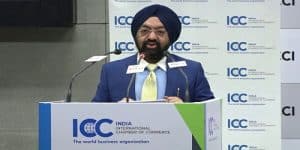 On coming May ICC India going to conduct a Mega-Project in Paris. He will succeed Jawahar Vadivelu.
About ICC:
♦ Nickname : The world Business Organization
♦ Headquarters: Paris
♦ Motto : We make business work for everyone,everyday, everywhere.
♦ Formation: 1919
♦ Founded at : Atlantic City

Australian Olympian,Graham Reid  Appointed as Indian Men’s Hockey Team Chief Coach
On 8th April 2019, former Australia Coach, Graham Reid was appointed as the Chief Coach of Indian men’s hockey team. Reid’s occupancy as the coach of Indian men’s hockey team is till the end of 2020.He, 54, is succeeding Harendra Singh,former Indian Hockey player.
Key Points:
i. Reid’s tenure can be stretched till 2022 FIH World Cup depending upon his achievements.
ii. Reid’s first task will be India’s tour of Australia in May and then  FIH Men’s  Series Final in Bhubaneswar in June.
About Graham Reid:
i. Reid had a perfected playing career as defender and midfielder for the Australian national team and was part of the team at  1992 Barcelona Olympics.
ii. Likewise, Reid was the part of the Australian unit that won back-to-back Champions Trophy titles in 1984, 1985 and 1989, 1990.
iii. He was served as Australia’s Assistant coach in 2009.
iv. He supervised the Australian team to their fifth consecutive Champions Trophy title in 2012.
v. He was inducted into the Queensland Hockey Hall of Fame in 2015.

Dream11 becomes India’s first billion-dollar gaming Startup
Dream11 has just become a Unicorn, that is a billion-dollar startup. Few exciting developments have made Dream11 to be the India’s first gaming startup to join the elite club of privately-held startups. The term “Unicorn” refers to the tech startups with the market valuation of $1 billion. 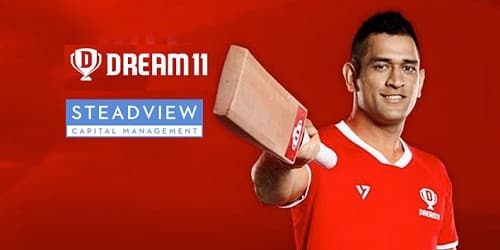 Key points
i. It has achieved this feat after getting the investment of $60 million from Steadview Capital of London and Hong Kong. While, Kalaari Capital, Multiples Alternate Asset Management and Think Investments had sold their existing equities in the company.
ii.  Headquartered at Mumbai, Dream 11 is founded by Bhavit Sheth & Harsh Jain in 2008.

Spain’s Garbine Muguruza claimed Monterrey Open title
The 2019 Monterrey Open aka 2019 Abierto GNP Seguros was the 11th edition of Monterrey Open, held at Monterrey in Mexico. It was a women’s tennis tournament played on outdoor hard courts. The prize money of the tournament was $250,000. 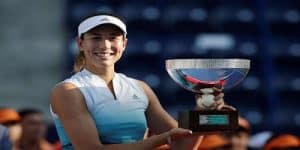 Key points
i. Garbine Muguruza of Spain successfully claimed back-to-back Monterrey Open title on 7th April, 2019, as Victoria Azarenka succumbed to injury in the final, the score was 6-1 3-1 at that time.
ii. Asia Muhammad & Maria Sanchez of USA has claimed womens doubles title in Monterrey Open by defeating Monique Adamczak and Jessica Moore of Australia.

Dave Bautista retires from Wrestling
Dave Bautista has officially retired from wrestling aftermath of a defeat at the WWE’s (World Wrestling Entertainment) Wrestlemania event on 7th April, 2019.
Key points
i. The Guardians of the Galaxy star, Dave Bautista has focused on his film career in recent years, but returned to the WWE promotion.
ii. Dave will be seen reprising his role as Drax the Destroyer in “Avengers: Endgame“, which he will follow up with “Stuber”.
iii. Dave Bautista was born on 18th January 1969 in Virginia, USA

James Bond Actress Nadja Regin passed away aged 87
On 8th April 2019, the Serbian actress Nadja Regin passed away at the age of 87.
Key Points:
i. She appeared in two Bond films “From Russia with Love” and “Goldfinger,”.
ii. She was born on 2nd December 1931 in Belgrade, Serbia.
iii. She wrote a novel, named ‘The Victims and the Fools’, which was published under her full name Nadja Poderegin.
About Serbia
♦ Capital: Belgrade
♦ Currency: Serbian dinar
♦ Prime minister: Ana Brnabic

International Day of Reflection on the 1994 Rwanda Genocide observed on April 7, 2019 marked the 25th commemoration of the 1994 Rwanda Genocide
Since 2004, April 7 has been observed as the Day of Remembrance of the Victims of the Rwanda Genocide by United Nations (UN). The day commemorates the slaughter of 800,000 people (where Tutsis and moderate Hutus were killed by members of the army, militias, and civilians of the Hutu community) for a period of 100 days during the 1994 genocide in Rwanda in central Africa.
i. The Day of Remembrance is an official UN observance day and not a public holiday.
ii. Paul Kagame, The 61-year-old Rwandan president (since 2000), who led a rebel force that ended the genocide, began the ceremony by lighting a remembrance flame at Kigali. The flame will burn for 100 days, thus commemorating the entire period of the mass-murder. He then delivered a speech at the Kigali Convention Centre.
iii. At the Amahoro National Stadium in Gasabo district of Kigali, Rwanda, the president led a vigil. This stadium was used by UN officials to protect Tutsis during the killings.
iv. Around  2,000 people marched together on a walk of commemoration and remembrance from the parliament to the National Stadium..
v. To commemorate its 25th anniversary, the round table entitled “Memory, research and transmission” was held at UNESCO Headquarters in Paris. Also exhibition “Upright Men” by Bruce Clarke, and the Shoah Memorial exhibition “The Genocide against the Tutsi in Rwanda” was displayed. 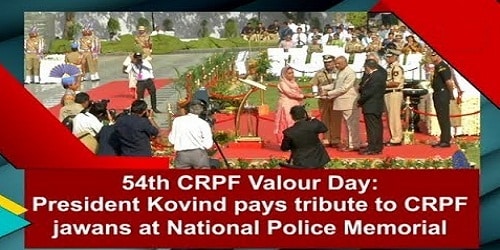 Key Points:
i. On this day, President Ram Nath Kovind launched Veer Parivar App for assistance to the next of kin of the CRPF martyrs.
ii. History of Day:  on April 9, 1965, a small contingent of 2nd Battalion of CRPF successfully fought against Pakistani Brigade at Sardar Post in the Rann of Kutch in Gujarat.