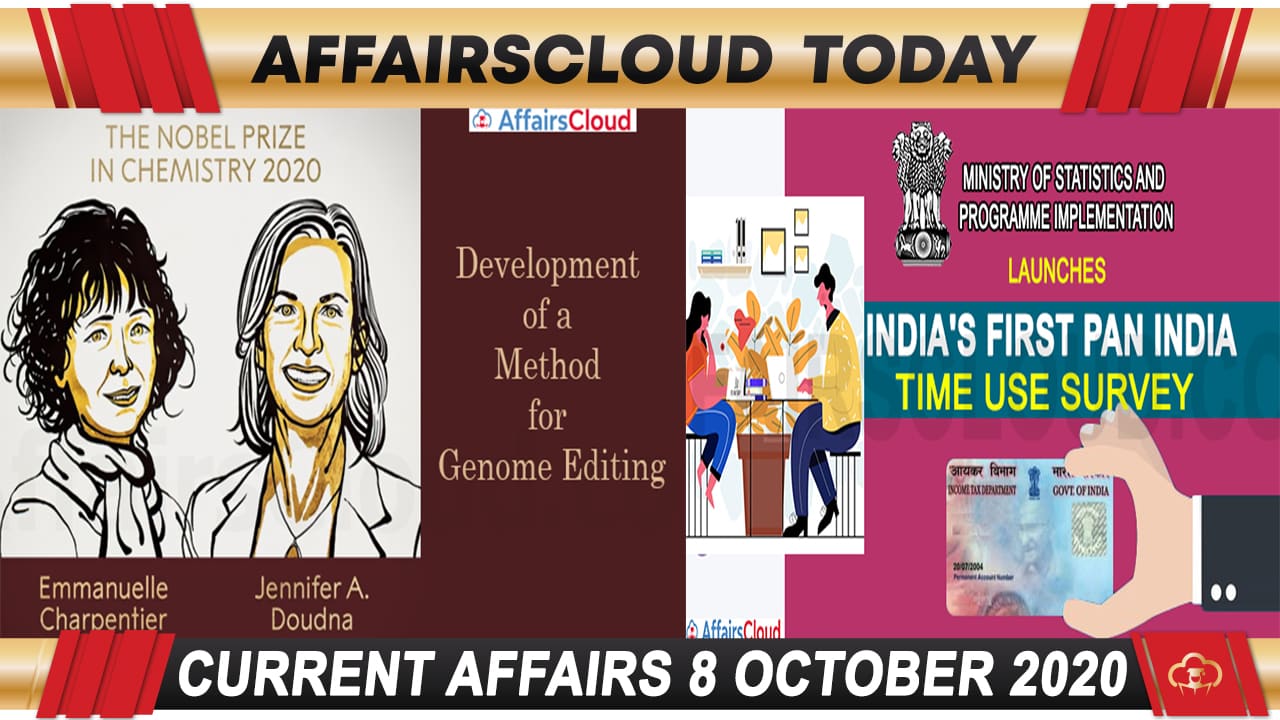 We are here for you to provide the important Recent and Latest Current Affairs 8 October 2020, which have unique updates of Latest Current Affairs 2020 events from all newspapers such as The Hindu, The Economic Times, PIB, Times of India, PTI, Indian Express, Business Standard and all Government official websites. 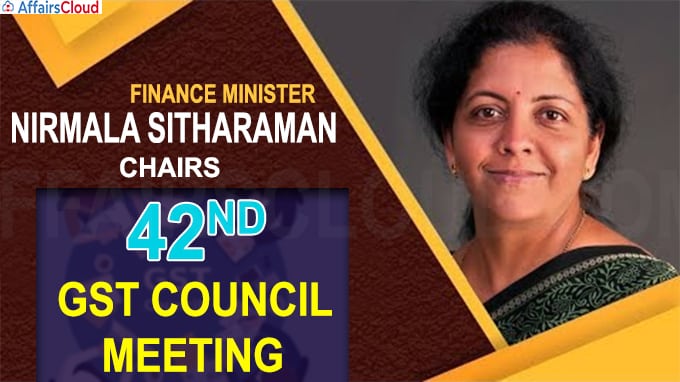 i.In the current fiscal (FY21), the states are facing Rs 2.35 lakh crore Goods and Services Tax (GST) revenue shortfall, out of which, Rs 97,000 crore is on account of GST shortfall, while Rs 1.38 lakh crore is due to COVID-19 pandemic.
ii.In this regard, on October 5, 2020 the 42nd GST Council meeting was held video conferencing from New Delhi under the chairmanship of Union Finance Minister Nirmala Sitharaman where it was decided that this year’s compensation cess collected amounting to Rs 20,000 crore will be disbursed to the states.
iii.Extension of compensation cess: The transition period of five years for levy of Compensation Cess will be extended i.e. beyond June, 2022.
iv.Integrated GST: An amount of about Rs 25,000 crore towards IGST of 2017-18 will be released by the end of next week to the states which had received less earlier.
About GST Council:
GST Council is an apex member committee to modify or to procure any law or regulation based on the context of GST in India. The council is headed by the union finance minister (Current- Nirmala Sitharaman) assisted by the finance minister of all the states of India. i.On 6th October 2020, Indian Sign Language Research and Training Center (ISLRTC) and The National Council of Educational Research and Training (NCERT) signed a Memorandum of Understanding(MoU) to convert the NCERT educational materials into Indian Sign Language(ISL).
ii.This ensures the accessibility of NCERT materials to the Indian students with hearing impairment in their preferred mode of communication(ISL).
iii.The MoU was signed by Dr Prabodh Seth, Joint Secretary of the Department of Empowerment of Persons with Disabilities (DEPwD) & Director, ISLRTC and Prof. Hrushikesh Senapathy, Director of NCERT.
iv.This MoU is based on the United Nations Children’s Fund(UNICEF)‘s initiative “Accessible Digital Textbooks for All” and its decisions.
About Indian Sign Language Research and Training Center (ISLRTC):
ISLRTC is an autonomous national institute under the DEPwD.
Chairperson & Director– Prabodh Seth
Headquarters– New Delhi
About National Council of Educational Research and Training (NCERT):
NCERT is an autonomous organisation under the Ministry of Education(MoE) (formerly known as Ministry of Human Resource and Development(MHRD))
Director– Hrushikesh Senapathy
Headquarters– New Delhi
<<Read Full News>> 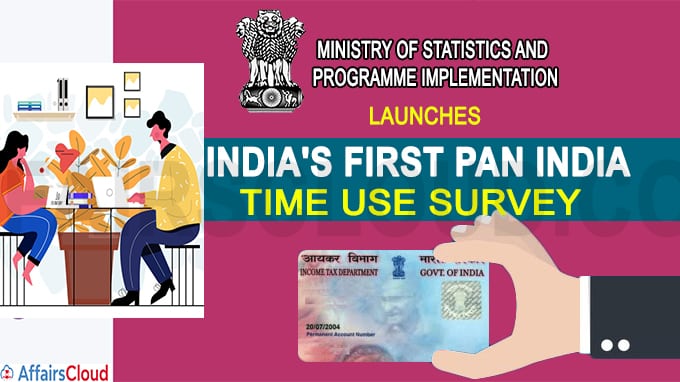 On October 6, 2020, India’s first Pan India time use survey (TUS) titled “NSS Report- Time Use in India 2019” where NSS is National Sample Survey, was released by the Ministry of Statistics and Programme Implementation (MoSPI) in the form of 2,140-page report. It was a sample survey conducted between January and December 2019 in which 1.39 lakh households across the country and 4.47 lakh persons over the age of 6 were enumerated in measuring the participation of men and women in paid and unpaid activities.

Key Findings:
–The participation rate of men in paid employment including jobs, farming, fishing, mining amongst other economic activities is at 57.3%, compared to women participation rate of 18.4%.
–Indian men also spend more time at paid work, spending on average 7 hours 39 minutes compared to the 5 hours 33 minutes spent by women.
–81.2%women participate in unpaid domestic services spending an average 4 hours 59 minutes each day while for men it is low at 26.1% with average spending of around 1 hour 37 minutes.
–Indians do not like to participate in unpaid volunteer work.
About Time Use Survey (TUS):
It is an important source of information on the time spent in unpaid caregiving activities, volunteer work, and unpaid domestic service producing activities of the household members. The findings of these surveys are helpful in drafting policies on poverty, gender equity and human development.
About Ministry of Statistics and Programme Implementation (MoSPI):
Minister of State (Independent Charge)– Rao Inderjit Singh 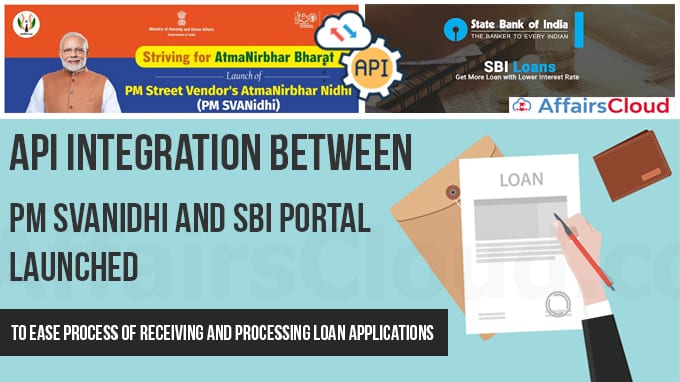 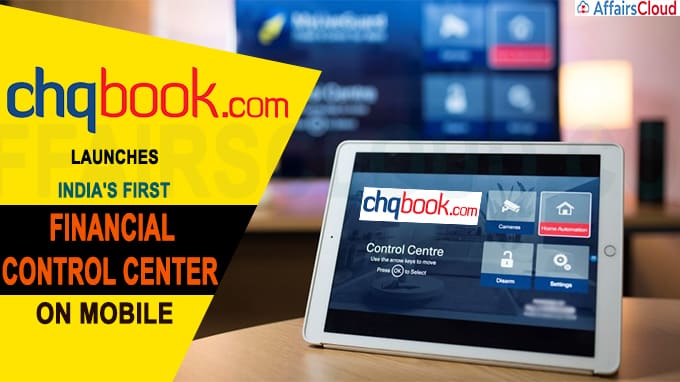 i.On September 30, 2020 In view of the pandemic, Chqbook(Chqbook.com), India’s first Neobank for small business owners like kiranas, merchants, chemists, and others running proprietorships has launched India’s 1st ‘Financial Control Center’, a new mobile platform to empower 60 million small business owners of India.
ii.The mobile application of Chqbook will give small businesses the power to manage everyday financial needs and to access other financial products, which helps them to save time, effort and money.
About Chqbook(Chqbook.com):
Founder & CEO– Vipul Sharma
<<Read Full News>> 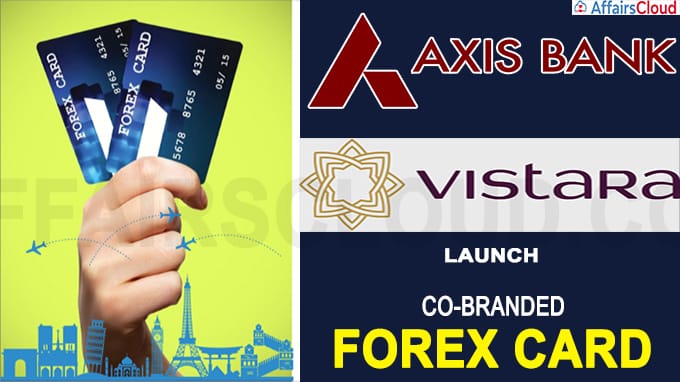 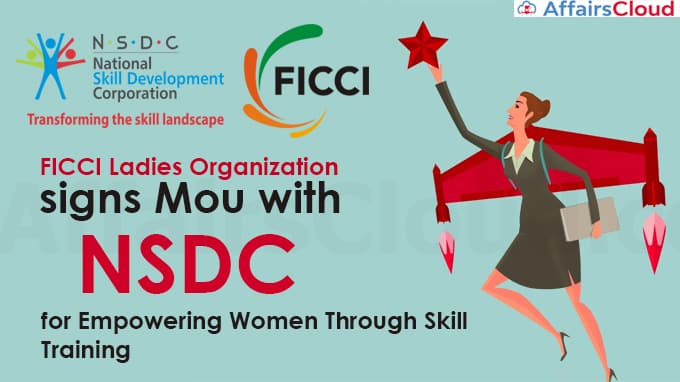 On 2nd October 2020, Federation of Indian Chamber of Commerce and Industry(FICCI) Ladies Organisation (FLO), the women’s wing of FICCI and National Skill Development Corporation (NSDC) signed a Memorandum of Understanding (MoU) under the 3C initiative of FLO to empower women with employability through skill training and to promote women entrepreneurship.
The primary focus of this MoU is to generate a sustainable livelihood for women.
Features of MoU:
i.The collaboration between FLO and NSDC will support the empowerment of women to develop sustainable economic possibilities at various levels like grassroot, medium and senior.
ii.FLO and NSDC will support the short term training of women in different sectors like healthcare, tourism, hospitality and others and will also support them with their domestic and overseas placement.
iii.This association will create better employability opportunities for women through market relevant skill training for various roles.
3C Initiative:
i.The 3C Initiative of FLO aims to build the Competency, Capacity and Confidence of women through transformational life skills and Technical Education Adopt ITI Programme(AITIP) which will empower women with tools and knowledge to become economically independent.
ii.This 3C initiative enhances the NSDC work on increasing the participation of the female labour force. Emmanuelle Charpentier and Jennifer A. Doudna Won 2020 Nobel Prize in Chemistry for Development of a Method for Genome Editing 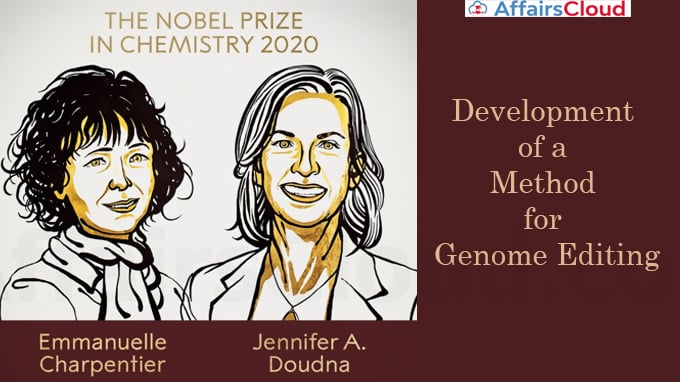 i.On October 7, 2020 Goran K. Hansson, secretary-general of the Royal Swedish Academy of Sciences, announced the Nobel Prize in Chemistry 2020 jointly to Emmanuelle Charpentier of France and Jennifer A. Doudna of the United States for the development of a method for genome editing, namely ‘CRISPR/Cas9 genetic scissors’. The method is one of gene technology’s sharpest tools.
ii.This is the 1st time 2 women have jointly won the Nobel Prize in Chemistry.
<<Read Full News>> 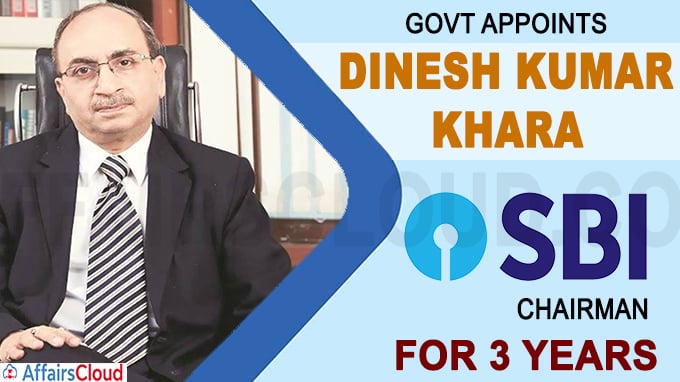 The Government of India appointed Dinesh Kumar Khara, the current Managing Director of State Bank of India as the new Chairman of SBI for a period of three years effective from 7th October 2020. Dinesh Kumar Khara succeeds Rajnish Kumar as the new Chairman, whose 3-year term ended on 7th October 2020.
The appointment of Dinesh Kumar was recommended by the Bank Board Bureau.
About Dinesh Kumar Khara:
i.Dinesh Kumar Khara is a Certified Associate of Indian Institute of Bankers(CAIIB) and he joined SBI as a probation officer in 1984.
ii.He played a major role in merging the 5 associate banks and Bharatiya Bank with SBI in April 2017.
iii.He was appointed as the MD of SBI in August 2016 for a term of 3 years.
iv.He headed the global banking division of SBI and also served as the MD and CEO of SBI Funds Management Private Limited(SBIMF).
About State Bank of India(SBI):
Chairman– Dinesh Kumar Khara
Headquarters– Mumbai, Maharashtra
Tagline– Pure banking nothing else, With you all the way, The Nation banks on us, A Bank to the common man, The Banker to Every Indian”. 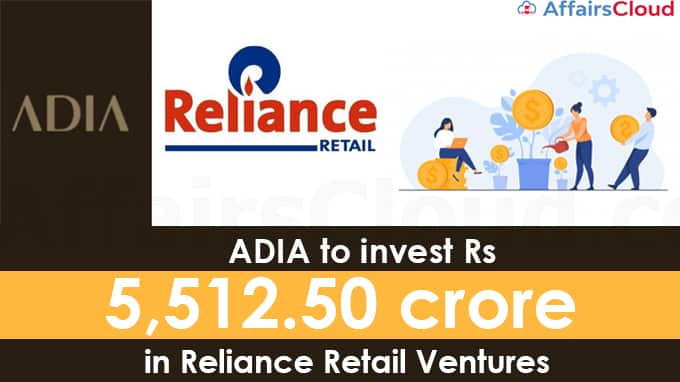 On 6th October 2020, The Reliance Industries Limited(RIL) announced that the wholly owned subsidiary of Abu Dhabi Investment Authority(ADIA) is set to invest Rs.5512.50 crore in the Reliance Retail Ventures Limited(RRVL) for 1.20% stake. The investment value of RRVL at pre money equity value of Rs.4.285 lakh crore.
Note:
With this investment RRVL has raised a total fund around Rs.37710 crore for 8.51% stake.
About the Investment:
i.The Rs.5512.50 crore investment of ADIA will translate into 1.20% equity stake in RRVL on a fully diluted basis.
ii.This investment of ADIA marks the 7th investment in RRVL following the investments of Silver Lake, KKR, General Atlantic, Mubadala, GIC and TGP.
iii.The ADIA’s investment in RRVL follows its Rs.5683.50 crore investment in Jio Platform for 1.16% stake.
iv.This fund will support the performance and potential of RRVL and its new commerce business model.
v.This investment is in line with the ADIA’s strategy of investing in markets leading business in Asia connected with the region’s consumption related growth and technological advancement. On October 6, 2020, The Seventh Offshore Patrol Vessel (OPV) ‘Vigraha’ of Indian Coast Guard (ICG) was launched at Kattupalli Port, Chennai. The vessel has been built by Larsen & Toubro (L & T).
i.This is the first time that a private sector shipyard has designed & constructed an offshore patrol vessel class ship.
ii.‘Vigraha’ is the last in the series of Seven OPVs contracted to Larsen & Toubro by the Defence Ministry in 2015.
iii.It will be inducted into ICG after the completion of trials and testing by March 2021.
About Indian Coast Guard (ICG):
Director General of ICG (DG ICG) – Krishnaswamy Natarajan
Headquarters – New Delhi
<<Read Full News>> 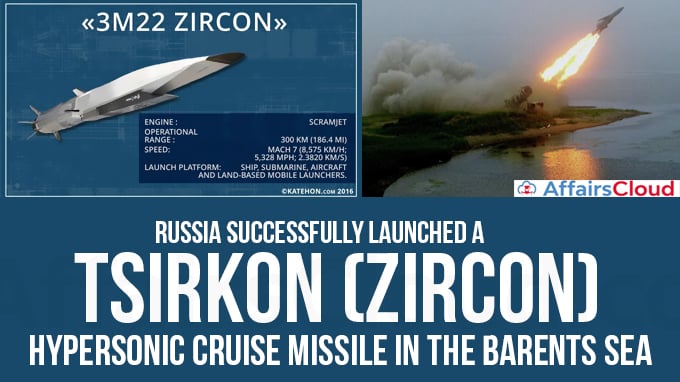 The world Cotton Day is held annually on October 7 since 2019 to recognize the importance of cotton as a global commodity grown in over 75 countries across five continents and to highlight its central role in job creation and maintaining economic stability in several least-developed countries.  The year 2020 marks its first anniversary
Background:
The Cotton-4 group (Benin, Burkina Faso, Chad and Mali) initiated the cotton sectoral initiative at the World Trade Organization (WTO) to improve the global trade rules related to cotton. It was there in 2019 that WTO organized the World Cotton Day event in collaboration with the secretariats of the United Nations Conference on Trade and Development (UNCTAD), United Nations Food and Agriculture Organization (FAO), International Cotton Advisory Committee (ICAC) and the International Trade Centre (ITC).
About World Trade Organization (WTO):
Director General– To Be Appointed (Roberto Azevêdo stepped down as WTO Director-General on 31 August 2020)
Secretariat– Geneva, Switzerland 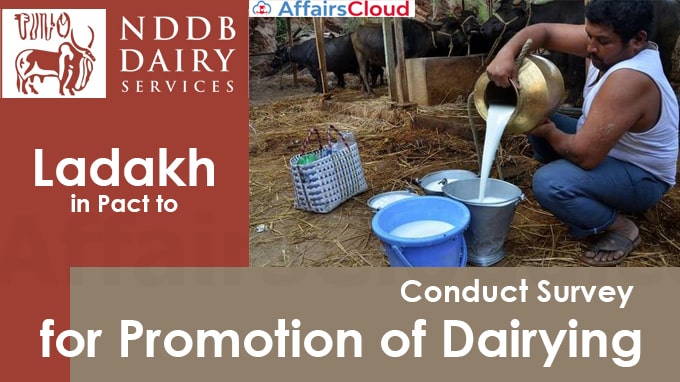 The Development Monitoring and Evaluation Office(DMEO), Niti Aayog conducted a Data Governance Quality Index Survey to assess the performance of the ministries/departments based on the implementation of Central Sector Schemes(CS) and Centrally Sponsored Schemes(CSS). The Department of Fertilizers, Ministry of Chemical and Fertilizers ranked 3rd among the 65 ministries/departments with 4.11 on a scale of 5. The Department of fertilizers also secured 2nd rank among the 16 Economic Ministries/Departments.

On 2nd October 2020, The Indian Navy partnered with Greater Visakhapatnam Municipal Corporation (GVMC) for the Aerial Seeding Initiative at Visakhapatnam. This initiative aims to enhance the green cover in and around Visakhapatnam. Two UH3H helicopters with 2 tons of seed balls undertook the aerial seeding. Around 6.25 tonnes of seed balls were dropped in the region around Pedagantyada, Aganampudi, Naidu Thota, Chinamushidiwada, and Pavuralakonda in Bheemili.

Indian Private Firm Alpha Design Technology Limited (ADTL) bagged INR 591 crore contract for upgrading and digitising 16 Soviet Era Pechora missile and radar systems. ADTL has partnered with Russian entities for the project which will be executed in four years. It will be a major boost to indigenous defence manufacturing.