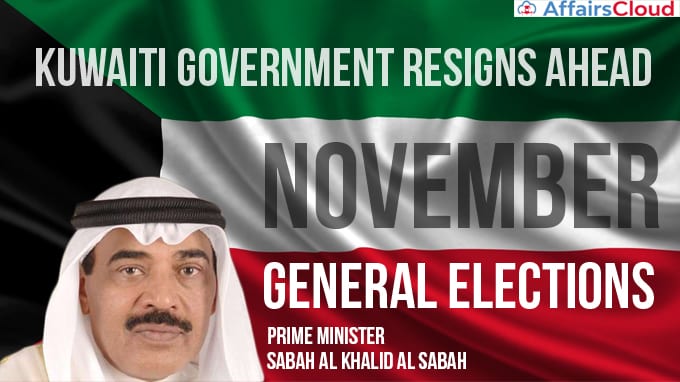 On October 6, 2020 The Kuwaiti government, headed by Prime Minister(PM) Sabah Al Khalid Al Sabah submitted its resignation to Emir Nawaf Al Ahmed Al Jaber Al Sabah in anticipation of the upcoming general elections that are due to be held in November, 2020. He took charge as the PM in 2019.

Note– This nomination will be put forth to the National Assembly (parliament) for their vote.

He started his career in 1978, joining the ministry of foreign affairs, where he worked at various capacities, including being a member of Kuwait’s permanent mission to the United Nations (1983-1989).

Key Positions held by him

i.He served as Kuwait’s ambassador to Saudi Arabia(1995-1998), during this period  he also served as the envoy of Kuwait to the Organization of the Islamic Conference (OIC).

ii.In July 2006, he was appointed as Minister of social affairs and labor(his 1st ministerial role), during this period also served as an acting foreign minister.

iii.Served as both deputy prime minister and minister of foreign affairs.

iv.In addition to his post as foreign minister appointed as First deputy prime minister on August 4, 2013.

Order of King Abdulaziz(1998), Honorary Companion of the Order of St Michael and St George(2012).

i.On September 27, 2020 Mustapha Adib, Lebanon’s Prime Minister designate, resigned after failing to form a government in a month of negotiations. His resignation comes amidst a political crisis over government formation, after he was appointed to the position on August 31, 2020.

ii.On July 15, 2020 Tunisian Prime Minister(PM) Elyes Fakhfakh resigned, who was appointed in January, 2020. He presented his resignation letter to President Kais Saied.He also served as a Minister of Tourism and as the Minister of Finance. He is a member of Democratic Forum for Labour and Liberties(referred to as Ettakatol).

About Kuwait(Officially- State of Kuwait):