We are here for you to provide the important Recent and Latest Current Affairs 6 March 2021, which have unique updates of Latest Current Affairs 2021 events from all newspapers such as The Hindu, The Economic Times, PIB, Times of India, PTI, Indian Express, Business Standard and all Government official websites. 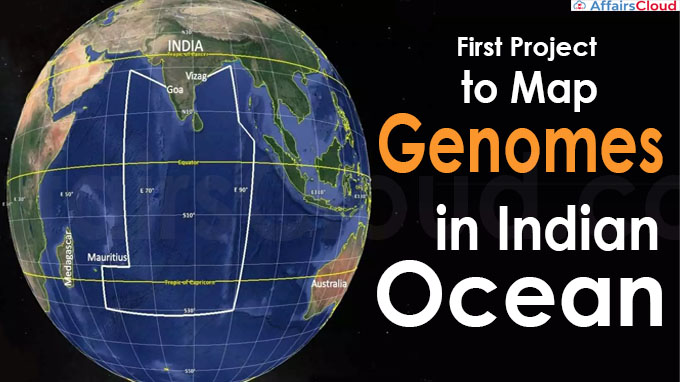 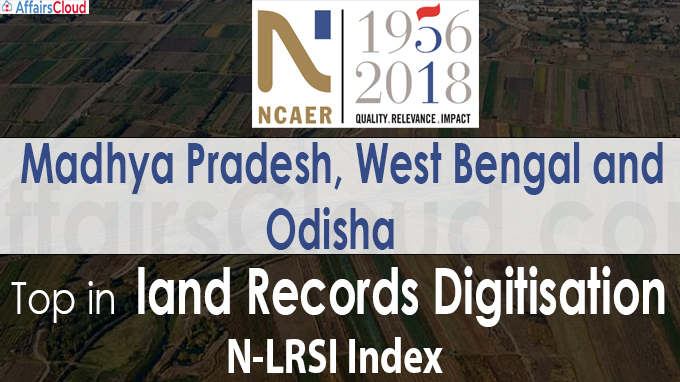 i.In accordance with the 2nd edition of NCAER Land Record and Services Index (N-LRSI) 2021, almost 32 States and Union Territories (UTs) have shown an improvement in their effort to digitise land records. Their mean has shown an increase of 16.6% in 2020-21 from 38.7 in 2019-20 to 45.1 in 2020-21 (out of 100 points).
ii.Notably, Madhya Pradesh topped the list for the second year in a row and followed by West Bengal (2nd), Odisha (3rd), Maharashtra (4th) and Tamil Nadu (5th).
About National Council of Applied Economic Research (NCAER):
Establishment– 1956
President– Nandan M Nilekani
Headquarters– New Delhi
<<Read Full News>> 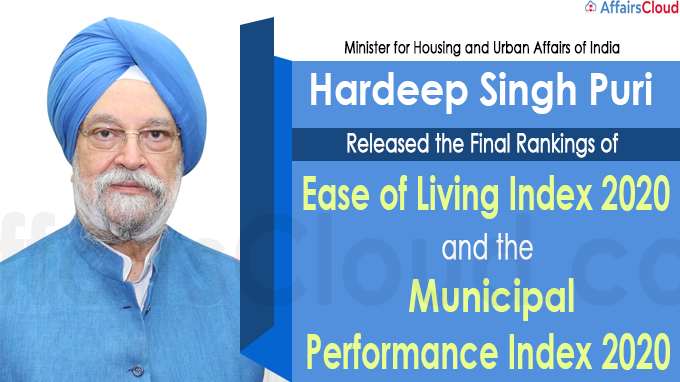 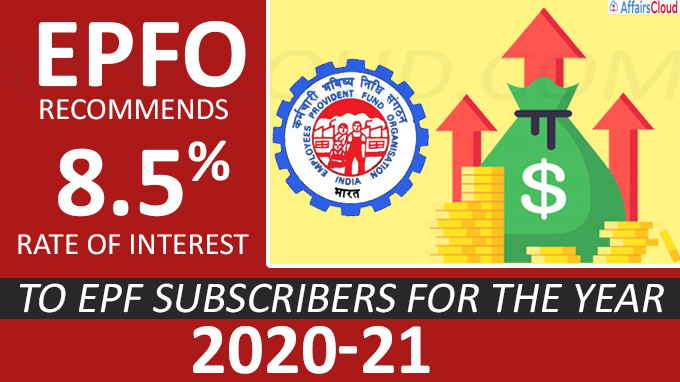 On 4th March 2021, Employees Provident Fund Organisation (EPFO) announced to retain 8.5% annual interest rates on provident fund(PF) deposits for the financial year 2020-21.
The decision was taken during the 228th meeting of Central Board of Trustees, EPF chaired by Santosh Kumar Gangwar, Minister of Labour and Employment, held in Srinagar, Jammu & Kashmir.

Significance of EPFO:
i.The assured fixed return approach of EPFO annually announced by the Central Board of Trustees along with the tax exemptions provides social security to the investors in the form of PF, pension and insurance schemes.
Background:
i.EPFO reduced the rate of interest to 8.5% for the financial year 2019-2020. It remains the lowest since 2012-2013.
ii.The rate of interest is comparatively higher than the other investments which are available for the investors.
iii.Through various economic cycles with minimal credit risk, EPF has distributed higher income to its members.
Raise in Subscribers:
i.During 2019-20, the number of net new subscribers has increased to 78.58 lakh compared to 61.12 lakh in the preceding fiscal.
ii.The new enrolment with EPFO increased by 56% to 11.55 lakh in October 2020 compared to 7.39 lakh in October 2019.
Key Points:
i.From 2015-2016, the EPF started to invest in equity through exchange traded funds based on NSE 50 and BSE 30 indices.
ii.The investment in equity funds started at 5% for FY 2015 and increased to 15% of the incremental portfolio.
About EPFO:
CEO– Sunil Barthwal (CEO of EPFO is known as Central Provident Fund Commissioner)
Head Office– New Delhi

i.On March 4, 2021, Union Minister Dr Harsh Vardhan, Ministry of Science & Technology virtually launched the CSIR (Council of Scientific and Industrial Research) Floriculture Mission from New Delhi. It has been approved by the Government of India for implementation in 21 States and Union Territories (UTs) of India.
ii.Under this, CSIR will combine latest technologies in the field of floriculture.
iii.Dr. Harsh Vardhan also launched CSIR’s Societal Portal along with the Android App.
This portal has been developed by CSIR Team with the help of MyGov Team.
About Ministry of Science and Technology:
Union Minister Harsh Vardhan Constituency– Chandni Chowk, New Delhi
Departments under the ministry– Department of Science & Technology(DST), Department of Biotechnology(DBT), Department of Scientific & Industrial Research (DSIR)
<<Read Full News>>

India Telecom 2021:
India Telecom 2021 is a platform for convergence of technologies and business exchange
The event encloses strategies and learning that goes beyond Telecom and IT industries.
Inaugural session:
Rahul Chhabra, Secretary (ER), Ministry of External Affairs, Anita Praveen, Additional Secretary, Department of Telecommunications, and other senior officials and industry leaders addressed the inaugural session of India Telecom 2021.
Promoting fastest growing sector:
i.IT & Electronics industry is one of the fastest-growing industries in India, both in terms of production and export.Information Technology and Business process management (IT-BPM) industry revenue grew 7% y-o-y to reach US$ 191 billion in FY20 and is estimated to grow to US$ 350 billion by 2025.
ii.Moreover, revenue from the digital segment is expected to account for 38% of the total industry revenue by 2025. Digital economy is estimated to reach US$ 1 trillion by 2025.
Telecom Equipment Export Promotion Council(TEPC).
TEPC was established by the Ministry of commerce and Industry and Ministry of Communication, Government of India.
Aim:
To promote and develop the Export of telecom equipment and services.
Role of the Committee:
Disseminates the trade related data to its members.
Recommends changes in various policies and procedures for promotion of Exports and Services.
Undertake activities to promote exports (Commissioning of Studies to find potential markets, National/International Seminars, Participation of exporters in various overseas exhibitions).
About TEPC:
Chairman– Sandeep Aggarwal
Headquarters– New Delhi

AIM,NITI Aayog tie-up with MathWorks to strengthen the Deep-tech startup ecosystem of India On March 02,2021, Atal Innovation Mission (AIM), NITI Aayog, partnered with MathWorks-the developer of mathematical computing software for scientists and engineers to strengthen the Deep-tech startup ecosystem of India.
Partnership’s benefit to the startups
This partnership will provide the following benefits to the startups supported by AIM

Key points
Aiming to extend the industry tools and expertise to startups at AIM which is located across the county.
To use the technology and domain expertise of MathWorks to train the startups and incubators in areas of technical computing, engineering design and AI based innovations.
About MathWorks
It is an American privately held corporation that specializes in mathematical computing software.
CEO – John N. “Jack” Little
Headquarters -Natick, Massachusetts, USA
About Atal Innovation Mission (AIM)
Atal Innovation Mission (AIM) is a flagship initiative by NITI Aayog, Government of India to promote a culture of innovation and entrepreneurship in the country.
Mission Director – Ramanan Ramanathan
Headquarters – New Delhi

Union Minister of Information & Broadcasting, Prakash Javadekar, virtually addressed the “Khel Khel Mein”, a pan Maharashtra toy/game designing competition. On the occasion he made an announcement on the collaboration between the Ministry of Information & Broadcasting and IIT Bombay to establish a Center of Excellence in toys and gaming related areas. Indian Govt. under its Make in India initiative has also launched India’s first toy manufacturing cluster in Karnataka.

Despite the bloody border conflict in 2020, ban on hundreds of Chinese mobile apps and restrictions in investment, China with $75.9 billion regained its spot as the Largest Trading Partner of India. China is closely followed by the USA and UAE as the 2nd and 3rd largest Trading Partners of India. 51% of the total imports from China were accounted for by the purchase of Heavy Machineries. It is to be noted that in 2019 China was India’s largest trading partner with $85.5 billion trade and slipped to 2nd spot only in 2020 with $77.7 billion trade. According to ‘Food Waste Index Report 2021’ compiled by the United Nations Environment Programme (UNEP) & WRAP (Waste & Resources Action Programme) found that around 931 Million Tonnes  (1.03 Billion Tons) of Food waste was generated in 2019. It equals to  17% of food produced globally. 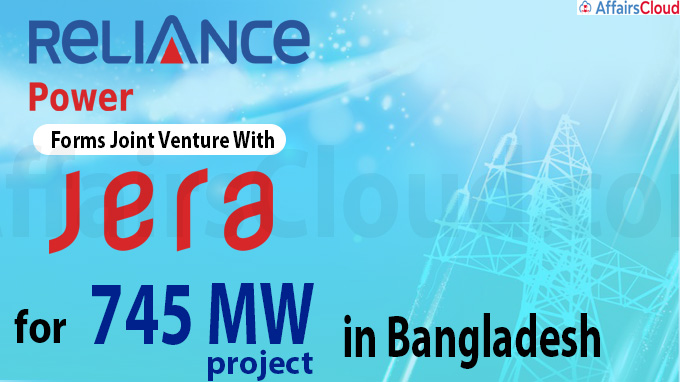 i.On March 4, 2021, a joint venture (JV) was formed between Reliance Power and Japan-headquartered Jera Co. Inc to build, own, and operate a 745-MW (net output: 718 MW) gas-fired power generation project in Meghnaghat near Dhaka, Bangladesh.
ii.As a part of this project, Reliance Power’s wholly-owned subsidiary Samalkot Power has received the approval from the Export Import Bank of the United States (US) to sell one module of equipment to Samsung C&T Corporation of South Korea for Rs 1,540 crore.
About Reliance Power:
Chairman– Anil Ambani
Headquarter– Mumbai, Maharashtra
<<Read Full News>>

According to the ‘Freedom in the World 2021: Democracy under Siege’ released by US based Think Tank Freedom House, India has scored 67 and its position has been downgraded to ‘Partly Free’ from ‘Free’ in 2020.  India’s ranking has also fallen to 88 (from 83) out of 211 countries.

Closure of Schools due to COVID has impacted 247 Million Children in India:UNICEF Study 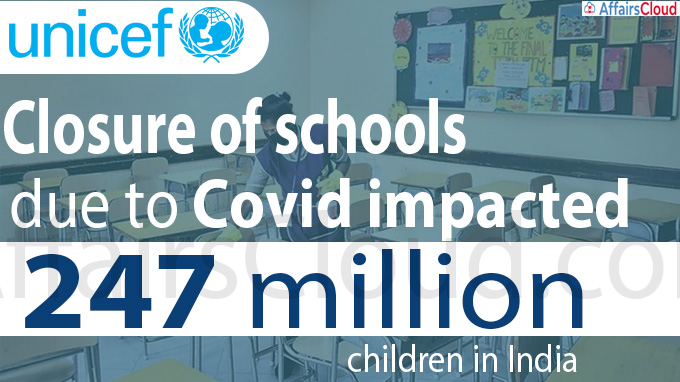 According  to report titled “Education: From disruption to recovery” released by UNICEF (United Nations International Children’s Emergency Fund), the closure of 1.5 Million schools due to pandemic & its lockdown in 2020 has impacted 247 Million Children enrolled in elementary & secondary schools in India. 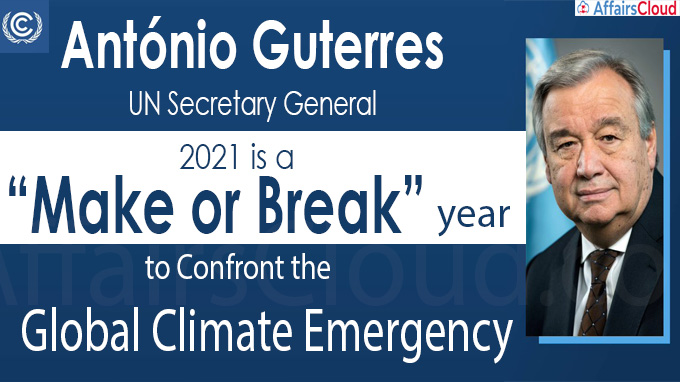 UN Secretary General, Antonio Guterres has stated 2021 is a ‘make or break year’ to confront the global climate emergency. The UN Framework Convention on Climate Change (UNFCCC) has released the Initial NDC (Nationally Determined Contributions) Synthesis Report which measures the progress of Climate Action Plans of Countries under the Paris Agreement.

2nd Report to be released prior to COP26
The second UNFCCC report will be released before the COP26 (2021 United Nations Climate Change Conference), which is scheduled to be held in November 2021 in Glasgow, Scotland under the presidency of the United Kingdom.
About UNFCCC:
Executive Secretary – Patricia Espinosa
Signatory Parties – 197
Headquarters – Bonn, Germany On March 4, 2021, the private sector lender Kotak Mahindra Bank signed a Memorandum of Understanding(MOU) with the Indian Army at New Delhi for providing salary accounts to all the active and retired army personnel. IIT Madras-incubated startup Pi Beam has launched an Electric Two-wheeler called ‘PiMo’ which can charge faster than a smartphone & has a range of 50 Kms. Nearly 90% of PiMo’s product components are manufactured in India to embody the ‘Make in India’ spirit. 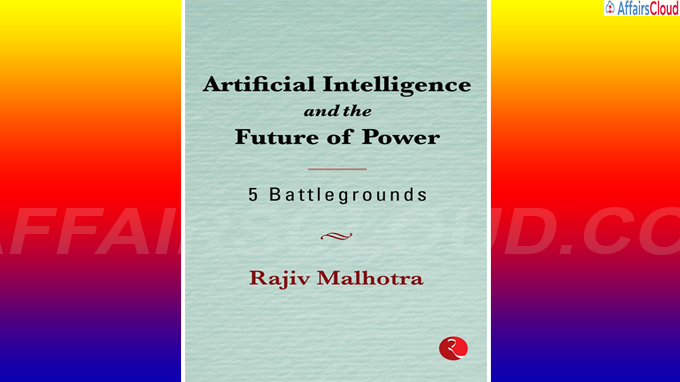 Acclaimed Author Rajiv Malhotra, a Physicist and Computer Scientist specializing in Artificial intelligence(AI) has authored a new book titled “Artificial Intelligence and the Future of Power: 5 Battlegrounds”. The book features both the positive and negative impacts of AI.
The book is published by Rupa Publications.
About the Book:
i.The book discusses the effects of AI on India and its impacts on our futures and it also looks into how the AI would modify the aspects of lives at international, national to personal level.
ii.The book states that, by leveraging AI and big data, various private organisations are gaining an ability to influence, manipulate and control the minds of people.
iii.These organisations have the potential to become more powerful than various companies and it is noted that there are no Indian companies in this league.
iv.The AI is a central node that integrates quantum computing, nanotechnology, medical technology, brain-machine interface, robotics, aerospace, 5G, Internet of Things, and others.
v.The book aims to educate the social segments and encourage them to take part in the discussion where the AI policies are formulated.
About Rajiv Malhotra:
i.Rajiv Malhotra, the founder of Infinity Foundation(Princeton), contributes to changing the global discourse with new and innovative paradigms.
ii.His works cover a wide range of topics like mind sciences, civilizations, geopolitics and the Future of India.
iii.He has been doing research on civilization and their engagement with technology from the historical, social sciences and mind sciences perspective.
iv.The Infinity Foundation has published a 14 volume series on the History of Indian Science and Technology.
Books: 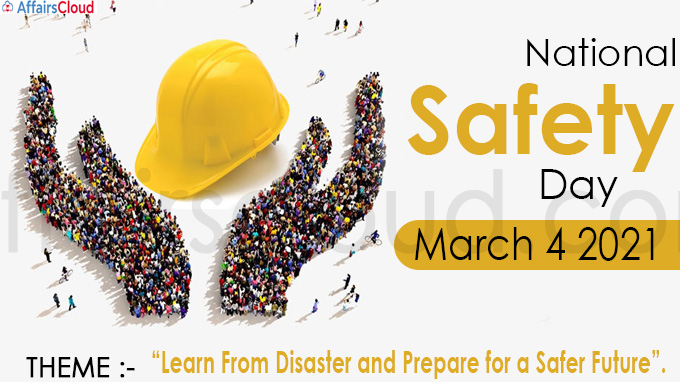 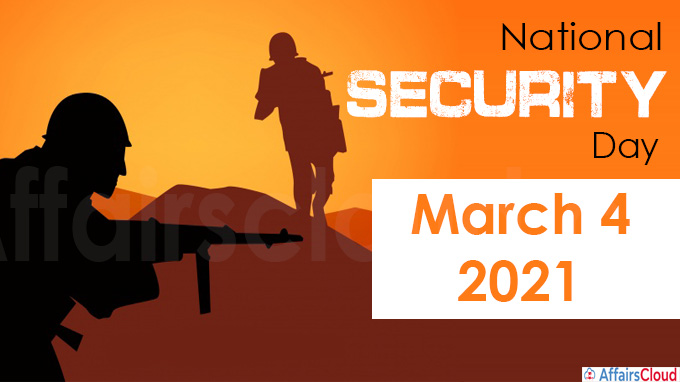 The National Security Day which is also known as the Rashtriya Suraksha Diwas is annually observed across India on 4th March to acknowledge and appreciate the works of the security forces of the country.

National Security Council(NSC):
i.The National Security Council was established by the former Prime Minister Atal Bihari Vajpayee on 19th November 1998.
ii.The NSC looks into the political, economic, energy and strategic security concerns of India.
iii.The Prime Minister of India heads the NSC.
iv.The NSC coordinates and integrates with the policies and plans that affect the security of the nation. 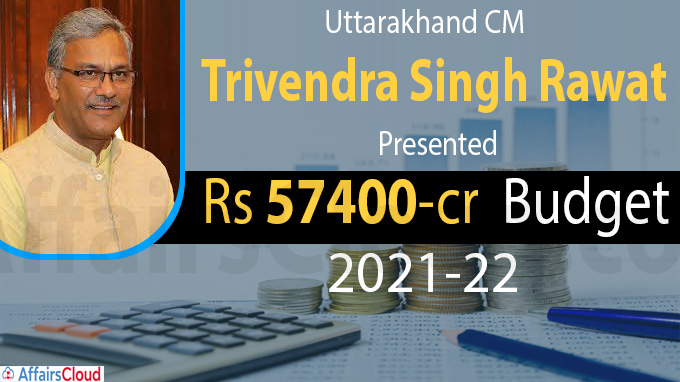 On 4th March 2021, the ArcelorMittal Nippon Steel(AMNS) signed a Memorandum of Understanding (MoU) with the Government of Odisha to set up an integrated steel plant with the capacity of 12 Million tonne per annum (mtpa) in Kendrapara district of Odisha with an investment of Rs.50000 crore.

About the project:
i.The exact location of the project is yet to be finalised.
ii.Around 4000 acres of land which includes government, private and other categories of land will be acquired for the project.
AMNS investments in Odisha:
i.The completion of this project will increase the pellet making capacity to 12 mtpa (million tonne per annum) from 6mtpa at Paradip with an investment of Rs.2000 crore in the next 2 months.
ii.This will also increase the beneficiation facility at Dabuna in Keonjhar to 16mtpa from 5 mtpa.
Key Points:
AMNS has 2 iron ore mines