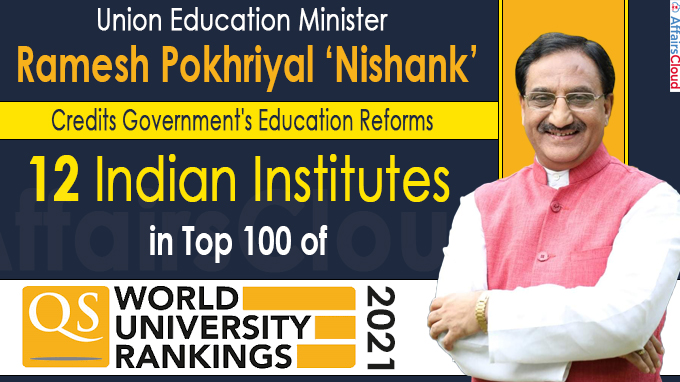 On March 4, 2021, the unveiling of QS (Quacquarelli Symonds) World University Rankings by Subject 2021 was held virtually which was addressed by Union Minister Ramesh Pokhriyal ‘Nishank’, Ministry of Education (MoE).

Why is it prepared?

This annual ranking covered a total of 51 disciplines, grouped into five broad subject areas to help prospective students identify the leading universities in a particular subject.

Following tables shows the list of Topper Institute and Indian Institutions in top 100 among five broad subject areas and other disciples:

i.The O P Jindal Global University is the only private university to have entered the top-100 club.

ii.There are 25 programmes offered by higher education institutions in India rank among the top 100 in the world in their respective subject categories. Out of them 17 are in engineering.

iv.For Life Science and Medical subject, AIIMS (All India Institute Of Medical Sciences) has bagged 248th rank while Delhi University and PGIMR Chandigarh have secured their places in 401-450 and 451-500 spots.

The Central Government is putting efforts to address the gender gap in higher education, as a result, now women constitute 48.6% of the total enrolment.

It is the world’s leading provider of services, analytics, and insight to the global higher education sector. It is providing university rankings since 2004.
Headquarters– London, UK

i.On January 2021, Henley & Partners released “Henley Passport Index:Q1 2021 Global Ranking” where India was ranked 85th with visa-free score 58. The visa-free score states that Indian passport holders get to visit 58 countries without a prior visa. India shared its rank with Tajikistan.

ii.In accordance with the 10th edition of the report titled “Global Corruption Barometer (GCB)-Asia 2020” by corruption watchdog Transparency International, India has the highest bribery rate of 39% in Asia and the highest rate of people (46%) who use personal connections to access public services.