The Border Roads Organisation (BRO) constructed the world’s highest 52-km-long tarmac road or motorable pass at Umling LA Pass in eastern Ladakh at an altitude of 19,300 feet which has surpassed the record of a road in Bolivia, South America at 18,953 ft which connects to its volcano Uturuncu.

Points to be noted
i.The road has been constructed at an altitude higher than the base camps of Mount Everest. The north base in Tibet is at 16,900 feet, whereas the south base camp in Nepal is 17,598 feet.
ii.It is also above the altitude of Siachen Glacier which is at 17,700 feet and the Khardung LA Pass in Leh, Ladakh is at an altitude of 17,582 feet.
iii.It connects the important towns in Chumar sector of eastern Ladakh by offering an alternate direct route connecting Chisumle and Demchok from Leh. 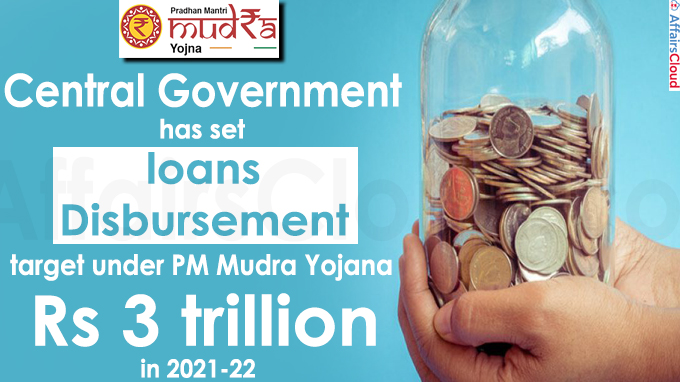 Government of India (GoI) has set the Loan Disbursement Target under Pradhan Mantri MUDRA Yojana (PMMY) at INR 3 trillion for the current Financial Year (FY) 2021-22.  It is less than the target set in the FY of 2020-21 – INR 3.21 Trillion.
i.The target has been lowered due to the increased allocation under the Emergency Credit Line Guarantee Scheme (ECLGS) for small businesses.
ii.In FY22, as on June 25th, loans worth INR 3,804 crore have been sanctioned by 13 Public Sector Banks (PSBs).
iii. In the previous FY 2020-21, the total loans disbursed under PMMY stood at INR 3.12 trillion, out of the sanctioned amount of INR 3.21 trillion.
Pradhan Mantri MUDRA Yojana (PMMY)
It was launched in 2015 by Prime Minister Narendra Modi and is implemented by the Ministry of Finance. It provides collateral free loans up to INR 10 lakh to the non-corporate, non-farm small/micro enterprises.

Governors can Pardon Prisoners, including Death Row ones under Article 161: Supreme Court A Supreme Court bench comprising Justices Hemant Gupta & AS Bopanna held that the Governor of a state can pardon prisoners, including death row convicts, even before they have served a minimum 14 years of prison sentence, as per constitutional powers granted to Governors under Article 161 of the Indian Constitution.
i.The court also noted that the sovereign power of a Governor to pardon a prisoner under Article 161 is actually exercised by the State government and not the Governor on his own. So, the advice of the appropriate government will be binding on the Governor.
ii.The Section 433-A of the Code of Criminal Procedure (CrPC), will not affect the constitutional power conferred on the President/Governor to grant pardon to convicts (under Articles 72 or 161 of the Indian Constitution).
About Supreme Court
Chief Justice – Justice N.V. Ramana
Articles 124 to 147 in Part V of the Constitution of India deals with the Supreme Court.
>>Read Full News About GKMS:
It is implemented jointly by IMD, Indian Council of Agricultural Research (ICAR) and State Agricultural Universities to provide weather-based crop and livestock management strategies for the benefit of the farmers 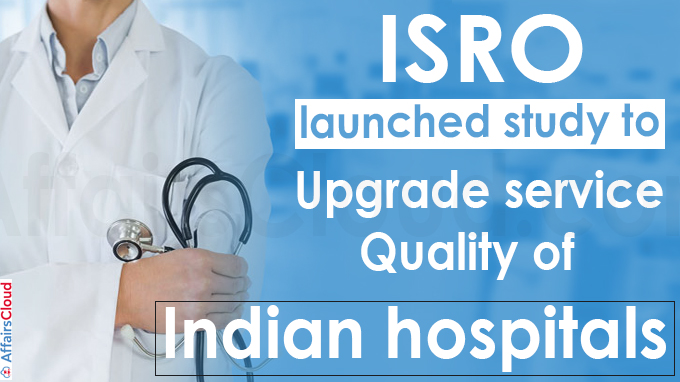 Dr K Sivan, Chairman of Indian Space Research Organisation (ISRO) formally inaugurated the Health QUEST study (Health Quality Upgradation Enabled by Space Technology of ISRO) to upgrade the healthcare systems standards of India in line with the ISRO’s quality standards and best practices.
i.The Study Team will explore the possibility of replicating ISRO’s Quality Assurance Mechanisms which are used in Space Technology in India’s hospitals. This is to ensure Zero-defect & Quality of service in the Emergency and Intensive Care Units (ICUs) of hospitals. Germany became the 5th country to join the International Solar Alliance (ISA) Framework Agreement after amendments to the ISA Agreement entered into force on 8th January 2021. 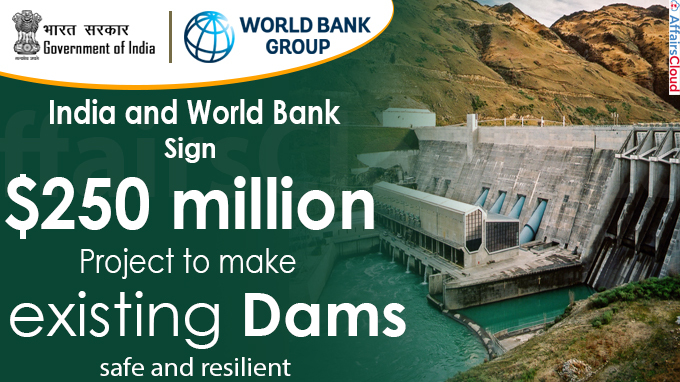 The Government of India (GoI) has signed a US $250 million (Rs 1,855 crore) loan agreement with the World Bank (WB) for the Second Dam Rehabilitation and Improvement Project (DRIP-2) Phase II, the world’s largest dam management program. The agreement is the 1st phase of ‘DRIP Phase II and Phase III’.

NABARD Partners with CWC to Offer Storage Facility for FPOs 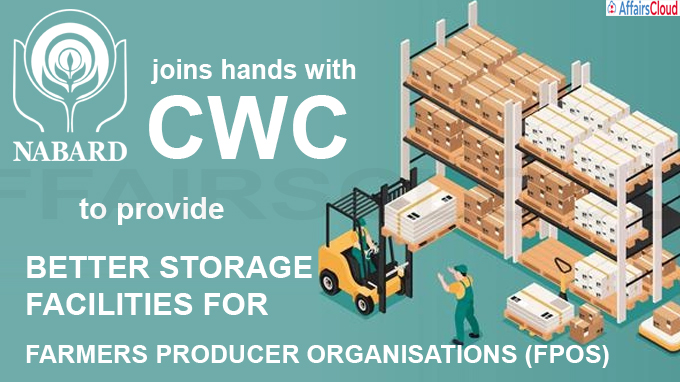 National Bank for Agriculture and Rural Development (NABARD) has partnered with the Central Warehousing Corporation (CWC) through the NABFoundation, to offer storage facilities for the Farmers Producer Organisation (FPOs) at lower rates for the next 5 years.
Objective:
To enhance the agricultural infrastructure in India.
Features of the partnership:
i.Under this partnership, the state-of-the-art storage facilities of CWC will be made accessible for the 5000+ FPO’s across India.
ii.The CWC will offer a 30% discount to FPO’s promoted by NABARD, on using the CWC Storage space in 423 warehouses across India.
iii.The CWC will assist the FPOs with access to air cargo operations, handling and transportation, and pest control services.
Benefits:
This partnership between NABARD and CWC will help the farmers to meet the immediate storage requirement for crop warehousing space when the price drops due to surplus supply during harvest season.
About Central Warehousing Corporation (CWC):
CWC was established under ‘The Warehousing Corporations Act, 1962
Chairman– Atish Chandra, IAS
Managing Director– Arun Kumar Shrivastava
Headquarters– New Delhi 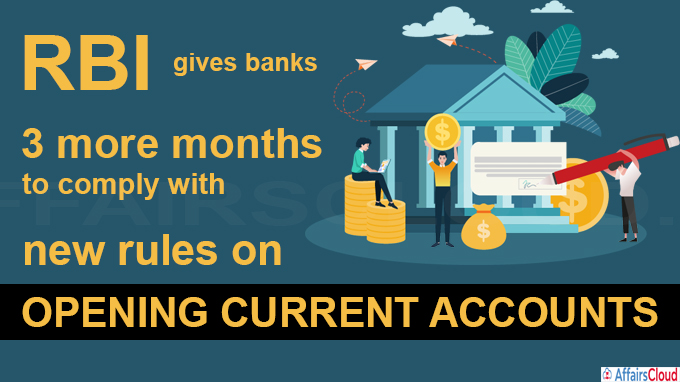 On August 04, 2021, the Reserve Bank of India (RBI) extended the timeline for Banks to implement the revised rules on opening current accounts to 3 months till October 30, 2021.
Background:
i.In August 2020, RBI revised the directions on opening and operating current accounts by banks and restricted the banks from opening current accounts for customers who have availed credit facilities from the bank in the form of cash credit (CC)/ overdraft (OD).
ii.Earlier the deadline was fixed by RBI till July 2021 to implement the regulations.
RBI’s New Guidelines:
i.Now RBI allowed banks to open current accounts for customers who have not availed of any CC/OD facility in the bank and with exposure (in the bank) of less than Rs 5 crore.
ii.RBI also allowed banks to open a current account of customers with exposure between Rs 5 crore to Rs 50 crore.

iii.RBI has directed the banks to reach the Indian Banks’ Association (IBA) for guidance if they couldn’t resolve the cases by themselves.
iv.The banks are also not permitted to open current accounts for borrowers who have availed agricultural/ personal OD or OD against deposits.
About OverDraft(OD):
i.It is a credit facility that will be provided by banks to allow customers to use or withdraw money from their savings or current account even when there is no balance or minimum balance up to the approved limit.
ii.OD will work like an approved loan but the banks will charge interest only on the utilized amount for the time when it is used. 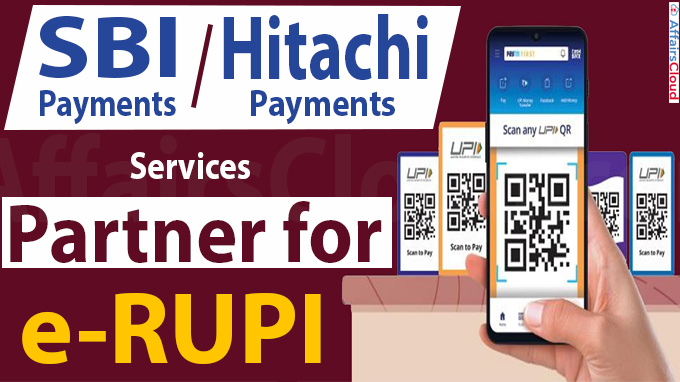 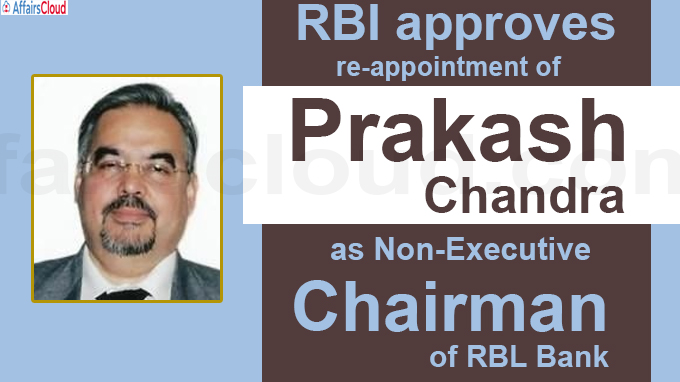 The Reserve Bank of India(RBI) has approved the reappointment of Prakash Chandra as the non-executive(part-time) Chairman of the RBL Bank for a period of 3 years with effect from 3rd August 2021.

About Prakash Chandra:
i.Prakash Chandra, a retired Indian Revenue Service(IRS) officer of the 1973 Batch, is currently enrolled as an advocate and a member of the High court and Supreme Court Bar Association.
ii.He has served as an advisor to the Union Public Service Commission(UPSC) and India’s Department of Personnel Government.
ii.He has held various positions in different ministries which include, Chairman of Central Board of Direct Taxes (CBDT), Delhi; Director of Department of Supply, Ministry of Commerce; Director of Border Roads Development Board, Ministry of Defence and Director General of Income Tax (International Taxation), Delhi.
About RBL Bank:
RBL bank, formerly known as Ratnakar Bank, was established in 1943.
Non-Executive Part-Time Chairman– Prakash Chandra
MD & CEO– Vishwavir Ahuja
Headquarters- Mumbai, Maharashtra
Tagline– Apno Ka Bank 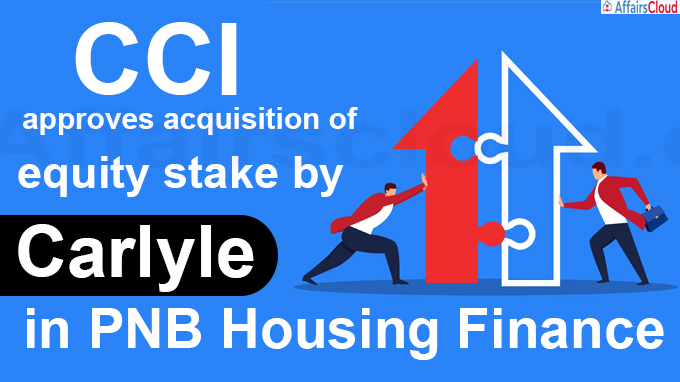 Competition Commission of India (CCI) has approved the acquisition of equity shares in PNB Housing Finance Limited (PNBHFL) by Pluto Investments, an entity of Carlyle Group and Salisbury Investments Pvt. Ltd, under the Green channel facility.
The transaction approved under Green Channel is deemed to be approved under regulation 5A of the CCI. India’s 1st Indigenous Aircraft Carrier (IAC-1) INS Vikrant has been launched for sea trials off the coast of Kochi, Kerala. A sea trial is the last phase of testing.
i.INS Vikrant has been designed by the Directorate of Naval Design (DND), Indian Navy and is built by Cochin Shipyard Limited (CSL).
ii.The total cost of the project is around INR 23,000 crore. Over 76% of the material and equipment on board is indigenous
iii.It has been named as INS Vikrant in remembrance of India’s 1st Aircraft Carrier INS Vikrant, which played a major role in the 1971 war against Pakistan. It was decommissioned in 1997.
iv.After its induction, INS Vikrant will be the second aircraft carrier after INS Vikramaditya, the Navy’s only aircraft carrier at present which entered service in 2013.
v.An Aircraft Carrier is one of the most important marine assets, it will enhance the Navy’s capability to travel far from the shores and to carry out many operations.
About Indian Navy
Chief of Naval Staff (CNS) – Admiral Karambir Singh
Integrated Headquarters of Ministry of Defence – New Delhi. On August 4, 2021, the Central Board for Indirect Taxes and Customs (CBIC) launched an Indian Customs Compliance Information Portal (CIP)-https://cip.icegate.gov.in/CIP for providing free access to information on all customs procedures and regulatory compliance for nearly 12,000 customs tariff items.

Key Points:
i.It will improve the ease of doing cross border trade.
ii.CIP is also equipped with a pan India map showing all the Customs seaports, airports, land customs stations etc along with addresses of the regulatory agencies and their websites.
How to use CIP?
i.Enter either the Customs Tariff Heading (CTH) or the description of the goods.
ii.This will provide information to step-by-step procedures, regulatory compliance requirements like License, Certificates, etc., for imports as well as exports.
About Central Board for Indirect Taxes and Customs (CBIC):
Former Name– Central Board of Excise & Customs
Parent Ministry– Ministry of Finance
Chairman– M. Ajit Kumar
Headquarter– New Delhi

‘A Begum and A Rani’ new book authored by Rudrangshu Mukherjee Renowned historian and author Rudrangshu Mukherjee has authored a new book titled “A Begum and A Rani: Hazrat Mahal and Lakshmibai in 1857” which explores the lives of ‘Begum Hazrat Mahal of Awadh’ and ‘Rani Lakshmibai of Jhansi’.
The book is published by Penguin Random House India.
About the book:
i.The book features the different paths of their lives and how their circumstances plunged them into the rebellion of 1857.
ii.The book narrates the story of these two women in rebellion.
About the author:
i.Rudrangshu Mukherjee, an internationally acclaimed historian of the revolt of 1858 in India.
ii.He is the chancellor and History professor at Ashoka University, of which he has served as the founding Vice Chancellor.
ii.He has been the Editor of the Editorial Pages, at The Telegraph, Kolkata from 1993 to 2014.
iii.In 1981, the University of Oxford awarded him a DPhil in Modern History.
Books: He has authored several books including, Nehru & Bose: Parallel Lives; Awadh in Revolt 1857-58: A Study of Popular Resistance; Spectre of Violence: The Massacres in Kanpur in 1857; The Year of Blood: Essays on 1857; Dateline 1857: Revolt against the Raj. 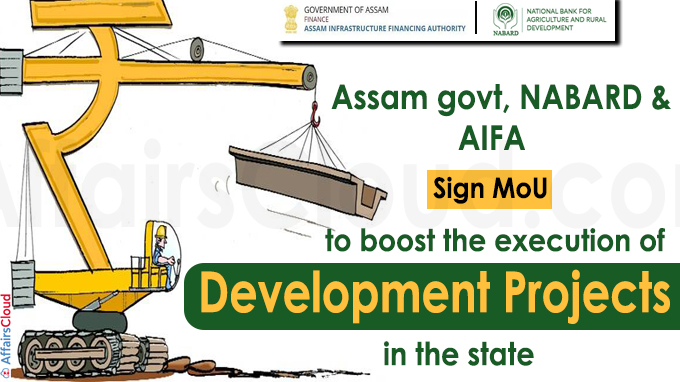 The government of Assam, the National Bank for Agriculture and Rural Development (NABARD) and the Assam Infrastructure Financing Authority (AIFA) has signed a Memorandum of Understanding(MoU) to assist the execution of various development projects in Assam. 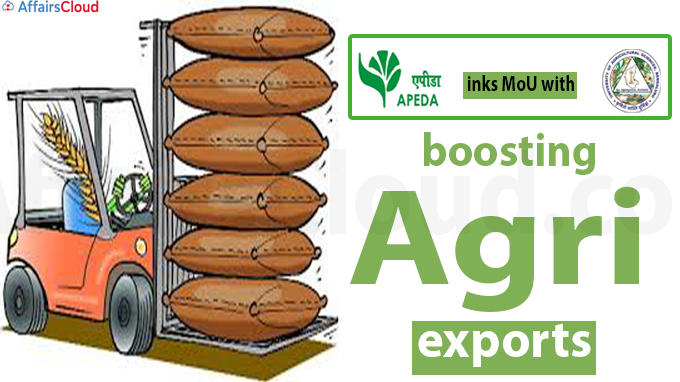 The Agricultural and Processed Food Products Export Development Authority (APEDA), an apex body under the Ministry of Commerce & Industry has signed a Memorandum of Understanding (MoU) with University of Agricultural Science (UAS), Bengaluru to boost agricultural and processed food products exports, especially from Karnataka.
i.Key areas of cooperation under MoU include developing technologies jointly with APEDA for efficient & precision farming for enhancing quality exports; diversifying the export basket & destinations.