We are here for you to provide the important Recent and Latest Current Affairs 6 & 7 April 2021, which have unique updates of Latest Current Affairs 2021 events from all newspapers such as The Hindu, The Economic Times, PIB, Times of India, PTI, Indian Express, Business Standard and all Government official websites. 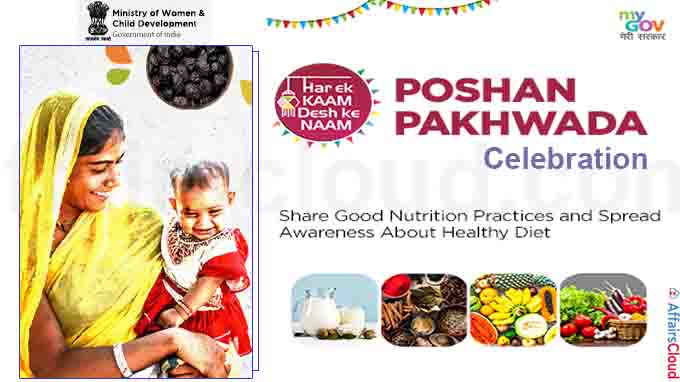 On April 04, 2021, the Tribal Cooperative Marketing Development Federation of India (TRIFED) under the Ministry of Tribal Affairs(MoTA) has launched “Sankalp se Siddhi” a Village & Digital Connect Drive.The main aim of this drive is to transform the tribal ecosystem across the country and activate the Van Dhan Vikas Kendras (VDVKs) in all tribal villages. 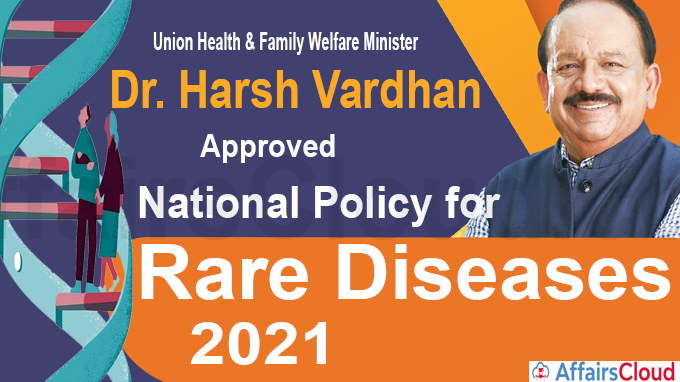 On March 30, 2021, Harsh Vardhan, Union Minister for Health & Family Welfare approved the ‘National Policy for Rare Diseases 2021’. The policy aims to address the high cost of treatment for rare diseases with increased focus on indigenous research.

Highlights
The policy has categorised rare diseases into three groups 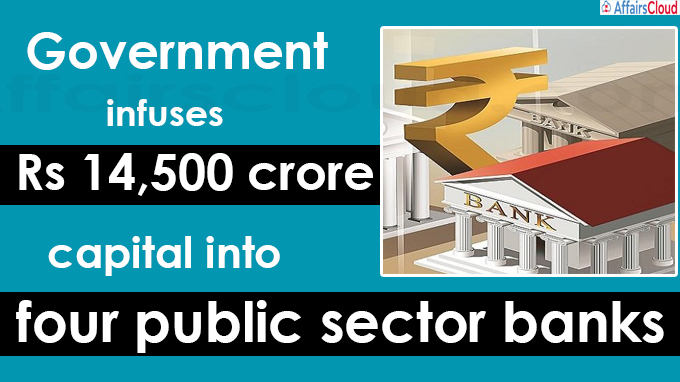 What are Recapitalisation Bonds? On April 4, 2021, Kosovo’s Parliament elected the 38 years old VjosaOsmani-Sadriu as its new president for a five-year term. She became the nation’s seventh president and its second female leader in the post-war period by succeeding Hashim Thaci.She is the country’s youngest head of state and one of the youngest in the world.

About the Republic of Kosovo: Pham Minh Chinh Appointed as Prime Minister:
The resolution to elect Pham Minh Chinh as the new PM was adopted by the top legislature with an approval rate of 96.25% at the ongoing 11th session of the 14th NA.

Other appointments:
i.The National Party Congress has re-elected Nguyen PhuTrong as the General Secretary for a 3rd term.
ii.VuongDinh Hue, former minister of finance and deputy prime Minister was elected as the Chairman of the National Assembly.
About Vietnam:
Capital– Hanoi
Currency– Vietnamese dong 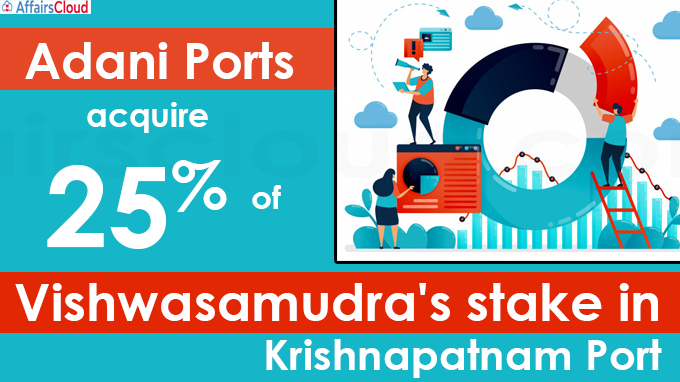 On April 05, 2021, Adani Ports and Special Economic Zones (APSEZ) has acquired the outstanding 25% stake in Krishnapatnam Port for Rs 2,800 crore from Vishwasamudra Holdings, making the port a wholly-owned subsidiary of the company.

About Krishnapatnam Port and its acquisition:

What is EBITDA Margin? Defence Laboratory Jodhpur (DLJ), a DRDO Laboratory (Defence Research and Development Organization) has indigenously developed an Advanced Chaff Technology to safeguard Indian naval ships from Missile Attack.
3 variants of Chaff technology have been developed. They are 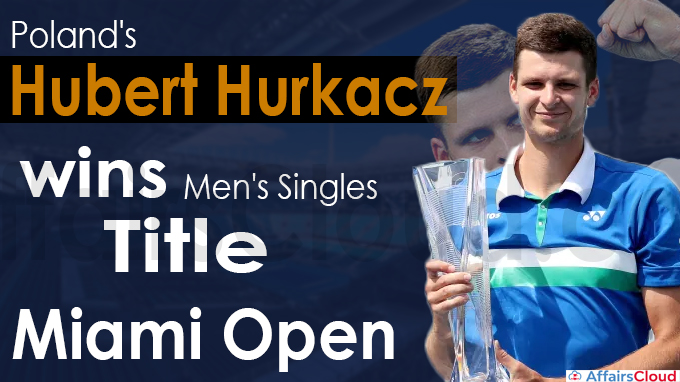 On 1st April 2021, Isamu Akasaki, one of the winners of the 2014 Nobel Prize in Physics passed away at the age of 92 in Nagoya, Japan. He won the Nobel prize for the invention of the world’s first efficient blue LED(Light Emitting Diode). He was born on 30 January 1929 in Chiran, Kagoshima Prefecture, Japan.
About Isamu Akasaki:
i.Isamu Akasaki, an electrical Engineer, has worked in various electronic companies like Kobe Kogyo Corporation and Matsushita Electric Industrial Co., now Panasonic Corp.
ii.He started to work as a professor at Nagoya University in 1981.
Honours:
i.The Government of Japan honoured him with the Medal with Purple Ribbon, which is presented to honour his contributions to academic and artistic development.
ii.Isamu Akasaki, along with Japanese Physicist and Shuji Nakamura, Japan-born American professor at the University of California, Santa Barbara won the Nobel Prize for Physics in 2014.
Importance of the Invention – Blue LED:
i.The invention of the efficient blue LED’s has contributed to the bright and energy-saving white LED light sources, known as LED Lamps.
ii.Isamu Akasaki worked with Hiroshi Amano, and Shuji Nakamura, and successfully produced the gallium nitride crystals in 1989 and created the world’s first Blue LED. Venkaiah Naidu Released The Book ‘Neelimarani – My Mother, My Hero’ By Dr.Achyuta Samanta

On 2nd April 2021, M. Venkaiah Naidu, Vice President of India released the book titled “Neelimarani – My Mother, My Hero” authored by Dr.Achyuta Samanta(Achyutananda Samanta), Member of Lok Sabha, at Raj Bhavan, Bhubaneswar, Odisha. This is a biography of Dr.Achyuta Samanta’s late mother, Neelimarani Samanta.
The book is published by Rupa Publications.
Key People:
Prof.Ganeshi Lal, governor of Odisha and Dr Pramod Kumar Meherda, Secretary to Governor were present during the release.
About Neelimarani Samanta:
NeelimaraniSamanta was a social activist who was instrumental in transforming the remote and backward Kalarabank village of Manpur Panchayat in Cuttack, Odisha into a smart village and model panchayat with all modern amenities.
About Achyuta Samanta:
i.Achyuta Samanta, a member of Biju Janata Dal(BJD) served as a member of Rajya Sabha from 2018 to 2019.
ii.He was elected as a member of 17th Lok Sabha from Kandhamal Constituency(Odisha) in 2019.
iii.He is the founder chancellor of Kalinga Institute of Industrial Technology(KIIT), and Kalinga Institute of Social Sciences (KISS), deemed to be a University. KISS has become the first tribal University in the world.
Honours:
He received various civilian awards from various countries including the Gusi Peace Prize, the highest Civilian Award from Bahrain. 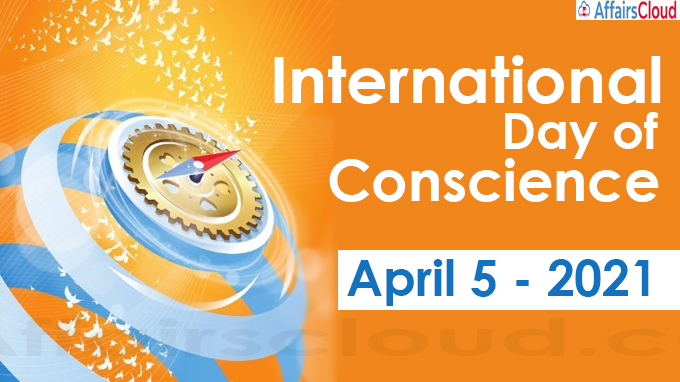 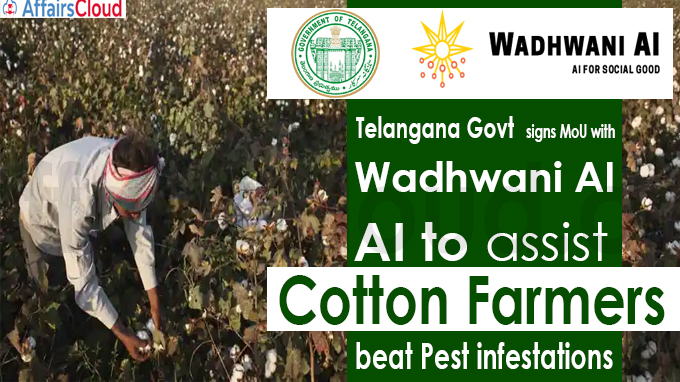