We are here for you to provide the important Recent and Latest Current Affairs 4 November 2020, which have unique updates of Latest Current Affairs 2020 events from all newspapers such as The Hindu, The Economic Times, PIB, Times of India, PTI, Indian Express, Business Standard and all Government official websites. 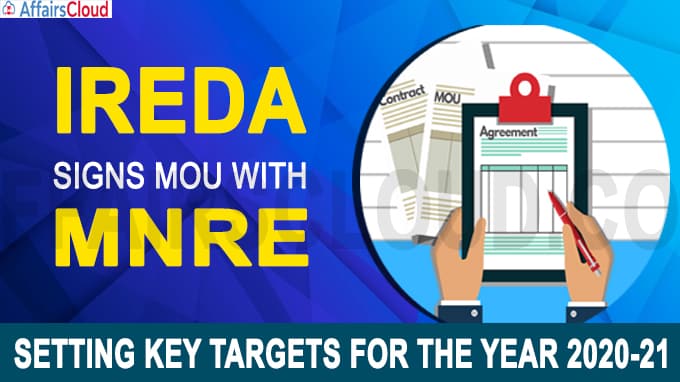 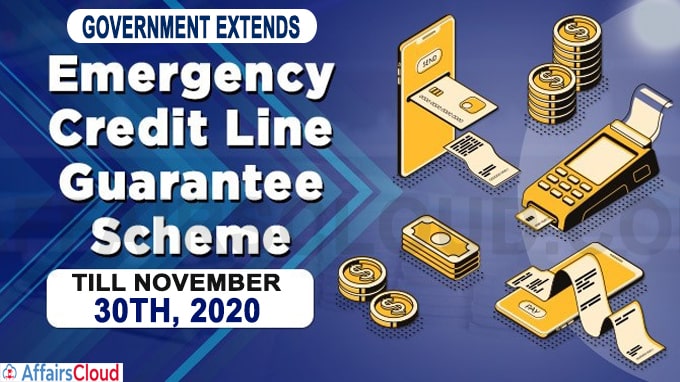 i.On November 2, 2020, Government of India extended Emergency Credit Line Guarantee Scheme (ECLGS) by one month (i.e.) 30th of November or till an amount of INR Three Lakh Crore (Target Credit of ECLGS) is sanctioned under the scheme, whichever is earlier. The previous Deadline was October 31, 2020.
ii.The extension will provide an opportunity for borrowers who have not availed the scheme so far, to obtain credit under the scheme.
iii.It has been extended for opening up various sectors in the economy and for expected increase in demand for the festive season.
Emergency Credit Line Guarantee Scheme (ECLGS)

i.In accordance with the World Wide Fund (WWF) Water Risk Filter, an online tool, co-developed by the WWF for Nature and Germany’s Deutsche Investitions- und Entwicklungsgesellschaft (KFW DEG), nearly a third of the 100 cities in the world susceptible to “water risk” are in India means 30 Indian cities are expected to suffer increased water risks by 2050.
ii.The list of Indian cities was topped by Jaipur (Rajasthan) which is followed by Indore (Madhya Pradesh) and Thane (Maharashtra).  Among 100 cities, Jaipur ranked 45th and Indore featured at 75th.
iii.On global front, the cities such as Beijing, Jakarta, Johannesburg, Istanbul, Hong Kong, Mecca and Rio de Janeiro are included in this filter. China accounts for almost half the cities.
iv.Globally, populations in areas of high-water risk could rise from 17% in 2020 to 51% by 2050.
About WWF Water Risk Filter:
Launched– 2012
Led by– Alexis Morgan
Headquarter– Berlin, Germany
About World Wide Fund (WWF):
President & Chief Executive Officer (CEO)– Carter Roberts
Headquarter– Gland, Switzerland
<<Read Full News>> 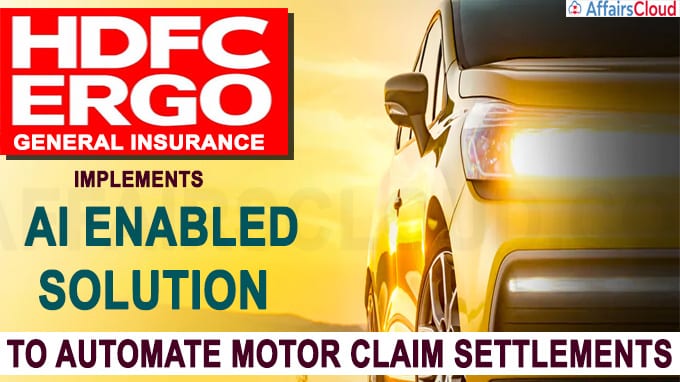 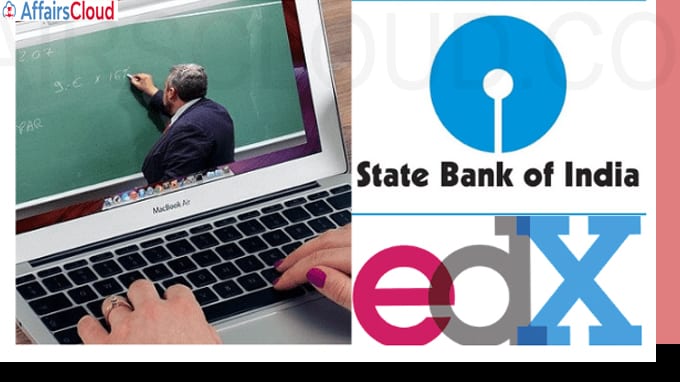 On October 29, 2020 In a bid to develop skill sets of career-oriented individuals, SBI(State Bank of India) has entered into a strategic partnership with edX, a global non-profit education platform to expand  the learners’ perspectives and access to knowledge beyond the classrooms. As part of this partnership, SBI will offer its Massive Open Online Courses (MOOCs) on the edX platform(edx.org.) from November 2020.
With this partnership, SBI becomes 1st Corporate Partner of edX from India.
Objective-To develop skill sets of career-oriented individuals.
Key Info
i.SBI, initially will offer 3 courses, namely Unleashing Creativity at the Workplace, Relationship Marketing Strategy for Financial Services, and Conflict Resolution.
ii.These courses will have a duration for 4 to 6 weeks.
iii.There is no specific academic qualification needed to enroll in the course.
Additional Info:
MOOCs are free online courses available for anyone to enroll. edX is one of the biggest MOOCs platforms.
About State Bank of India(SBI):
Chairman – Dinesh Kumar Khara(Preceded by Rajnish Kumar)
Headquarters – Mumbai, Maharashtra
Founded– July 1, 1955 as SBI
Tagline– The banker to every Indian; With you all the way; Purely banking nothing else; The nation banks on us; A bank of the common man
About edX:
Founder and CEO(Chief Executive Officer)– Anant Agarwal
HeadQuarters– Massachusetts(officially known as the Commonwealth of Massachusetts), United States 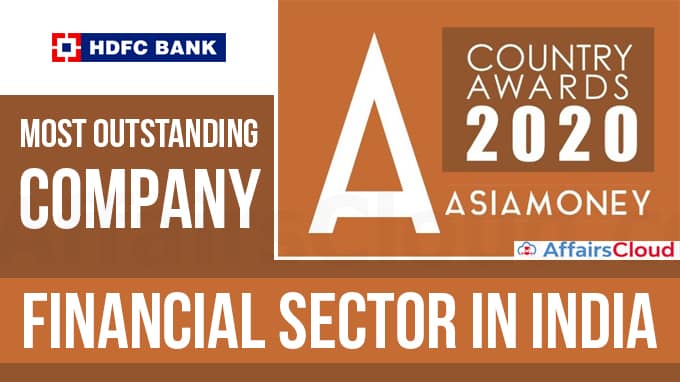 HDFC Bank Limited has been voted as the “Most Outstanding Company – Financial Sector” in India in the poll conducted by Asiamoney, a well-established financial publication. HDFC has been given the honour for the 2nd consecutive year.
Bharti Airtel won the overall winner by Market in India.Click HereTo know the overall winners by Market and winners by sector in each market
About Asia’s Outstanding Companies Poll:
i.The poll aims to identify and recognise the listed companies in 2 categories, 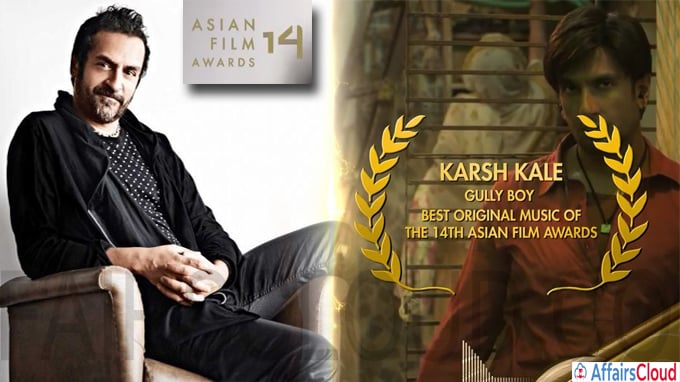 Duarte Pacheco, Portugal Parliamentarian was elected as the 30th President of Inter Parliamentary Union (IPU) for a three-year term of 2020-2023. He succeeds Gabriela Cuevas Barron, a Mexican Parliamentarian.
The Presidential Election was conducted over the virtual platform during the 206th Session of the Governing Council of IPU, which was conducted as a virtual session.
Note:
THe 206th session will be held from 1st to 4th November 2020.
About Duarte Pacheco:
i.Duarte Pacheco has been a member of Parliament in Portugal since 1991 and handled various functions in Parliament like Member of Budget and Finance Committee and Committee on Foreign Affairs and Portuguese communities.
ii.He also served as the vice President of the IPUs Standing Committee on Peace and International Security from 2014 to 2016 and served as its Internal Auditor in 2007, 2011, 2013 and 2015.
About the Presidential Election:
i.Around 400 parliamentarians from 140 member Parliaments registered their vote during the 24-hour window.
ii.More than 40% of the voting members were women parliamentarians and 27% of them were under 45.
Candidates:
Duarte Pacheco from Portugal, Muhammad Sanjrani from Pakistan, Akmal Saidov from Uzbekistan and Salma Ataullahjan from Canada were the candidates contested in the Presidential election.
Indian Delegation:
The Indian Parliamentary Delegation led by Om Birla Speaker of Lok Sabha and the members Poonamben Hematbhai Maadam and Swapan Dasgupta attended the meeting.
Snehlata Srivastava, Secretary General of Lok Sabha and Desh Deepak Verma, Secretary General of Rajya Sabha also attended the virtual meeting.
Other Business:
The governing Council also adopted an IPU budget and Programme of work for 2021.
About Inter Parliamentary Union (IPU):
President– Duarte Pacheco
Members– 179 national Member Parliaments and 13 regional parliamentary bodies
Headquarters– Geneva, Switzerland 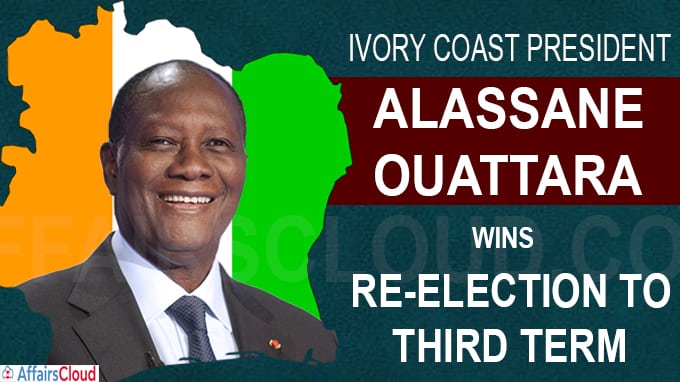 Alassane Ouattara, President of Ivory Coast (Côte d’Ivoire) won the 3rd term as the President with his landslide victory in the 2020 Ivory Coast Election securing 94.27% of the vote. The 2020 Ivory Coast Election held on 31st October 2020 was boycotted by the two opposition figures – former President Henri Konan Bedie and ex-Prime Minister Pascal Affi N’Guessan and their supporters.
About Alassane Ouattara:
i.Alassane Ouattara (78 years old) of Rally of Houphouëtists for Democracy and Peace (RHDP) party became the President of Ivory Coast in 2011.
ii.He was serving his 2nd consecutive term as the President of the country.
iii.The constitution of Ivory Coast limits the president to two terms and the approval of a new constitution in 2016 allows Ouattara to restart his mandate.
The Results of 2020 Ivory Coast Election:
i.The total voter turnouts was around 53.90% and the opposition claimed that only 10% Ivorians took part in the election.
ii.The main opposition candidates Henri Konan Bedie and Pascal Affi N’Guessan got 1% and 2% votes respectively and Kouadio Konan Bertin the 4th candidate got 2% of the total turnout votes.
iii.The results of the election are yet to be validated by the Constitutional Council of the country which will declare the winners after hearing the challenges or complaints of irregularities.
Note:
The opposition released the joint statement and announced the creation of a Transitional Council chaired by Henri Konan Bedie.
About Ivory Coast (Côte d’Ivoire):
Capital– Yamoussoukro(Administratice Capital),Abidjan(Economic Capital)
Currency– West African CFA franc 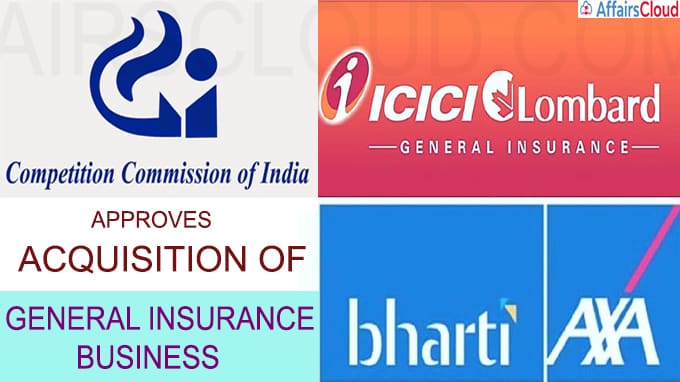 On November 3, 2020, Former Australian All Rounder Shane Robert Watson announced retirement from all forms of Cricket at the age of 39. He had already announced retirement from International Cricket in 2015 but was playing Franchise-based Cricket tournaments such as Indian Premier League (IPL), Pakistan Super League (PSL).
Key Points:
i.He is a right-handed batsman and a right-handed fast medium bowler.
ii.He made his debut for the Australian cricket team in 2002, playing his first One Day International against South Africa.
iii.Watson has played 59 Tests, 190 One Day Internationals (ODIs), and 58 Twenty20 Internationals (T20I), scoring 3731 runs and picked up 75 wickets in Tests, 5757 runs and 168 wickets in ODIs and 1462 runs & 48 wickets in T20Is.
iv.He was part of the World cup winning Australian Team in both 2007 and 2015 World cups.
v.He has played for Sydney Sixers, Sydney Thunders & Brisbane Heat in Big Bash League (Australia’s Franchise based T20 Cricket league), Islamabad United in Pakistan Super League, and for Rajasthan Royals, Royal Challengers & Chennai Super Kings (CSK) in the Indian Premier League.
He played his last match for CSK against Kings XI Punjab on November 1, 2020 at Abu Dhabi (Capital of United Arab Emirates).
Indian Premier League:
i.Shane Watson scored 3874 runs and picked up 92 wickets in 145 IPL matches.
ii.He won the Player of the Series Award in IPL for two times in 2008 & 2013.
Allan Border Medals:
He was awarded the Allan Border Medal in 2010 and 2011. He is only the second player (after Ricky Ponting) to win back-to-back Allan Border Medals. 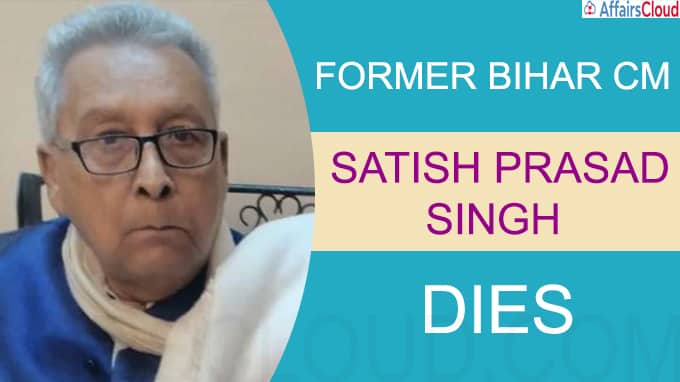 On November 2, 2020 Satish Prasad Singh, former Chief Minister(CM) and Socialist of Bihar passed away at the age of 84 due to illness at AIIMS(All India Institute of Medical Sciences), Delhi. Satish Prasad Singh, the leader of Soshit Samaj Dal became the 6th and the shortest- served CM of Bihar for 5 days(28 January to February 1, 1968) with the support of Indian National Congress(INC). He was born on January 1, 1936 in Korchakka(now known as Satish Nagar) Village, Khagaria district, Bihar.

About Satish Prasad Singh:
i.Before becoming an MLA, he produced, directed and acted as a hero in the film, ‘Jogi Aur Jawani’.
ii.He joined BJP(Bharatiya Janata Party), but in 2013 he quit the party.
iii.His daughter, Suchitra Sinha, was a minister in the Nitish Kumar-led cabinet and his son-in-law, Nagmani, was a Union Minister of State in the Vajpayee-led government. 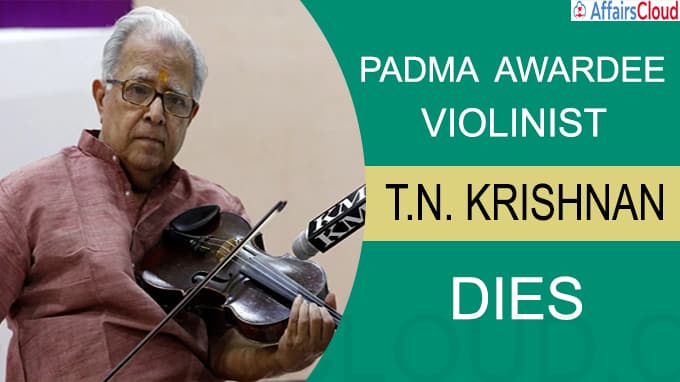 On 2nd November 2020, the Veteran Violinist and Padama Shri & Padma Bhushan Awardee Tripunithura Narayanaiyer Krishnan (T N Krishnan) passed away at the age of 92 at Chennai, Tamil Nadu. He was born in 1928 in Kerala.
About TN Krishnan:
i.T N Krishnan was a child prodigy who made his first solo violin concert in Thiruvananthapuram in 1939.
ii.He was mentored by Alleppy K. Parthasarathy and had accompanied numerous musicians like Ariyakudi Ramanuja Iyengar, Musiri Subramania Iyer, Alathur Brothers, Madurai Mani Iyer, Chembai Vaidyanatha Bhagavatar among others.
iii.He shifted his base to Chennai in 1942 where he was tutored by Semmangudi Srinivasa Iyer.
iv.His performances enhance the pristine beauty of Karnatic Ragas.
v.He has taught to students of Chennai Music College and he also served as the dean of School of Music and Fine Arts at the University of Delhi.
Awards & Titles:
i.He received the Padma Shri in 1973 and Padma Bhusan in 1992, India’s highest civilian awards, for arts.
ii.He received the Sangeetha Kalanidhi title, the highest recognition in the field of Carnatic Music in 1980. i.On November 2, 2020, the state government of Maharashtra has inked Memorandums of Understanding (MoUs) worth around Rs 35,000 crore with 15 companies viz. 10 Indian and 5 global companies at the ‘Magnetic Maharashtra 2.0’ investor meet in Mumbai, Maharashtra in order to develop state as data and logistics hub in western India. The event was attended by the state’s Chief Minister (CM) Uddhav Bal Thackeray. These MoUs are in addition to the 12 companies which signed the deals on June 15, 2020. Click Here to Read
ii.The MoUs were signed with the state-run Maharashtra Industrial Development Corporation (MIDC) in the presence of Industries Minister Subhash Desai and Minister of State (MoS) for Industries Aditi Tatkare.
iii.These include seven agreements for setting up data centres, five for logistics and one each in the gas & fuel, chemicals, and electronics sectors.
About Maharashtra:
Capital– Mumbai
Governor– Bhagat Singh Koshyari
Tiger Reserves– Tadoba Andhari Tiger Reserve, Nawegaon Nagzira Tiger Reserve, and Melghat Tiger Reserve
<<Read Full News>> On November 1, 2020, Board of Control for Cricket in India (BCCI) announced that Jio, a Telecommunications Company owned by Reliance Industries will be the title sponsor for the 2020 edition of the Women’s T20 Challenge. The partnership will also have the support of Reliance Foundation Education and Sports for All (RF ESA). This is the first time a sponsor has signed with BCCI exclusively for women’s matches. The Women’s T20 Challenge will be played from November 4-9 here in Sharjah and the competition will be contested between three teams – Trailblazers, Supernovas, and Velocity.