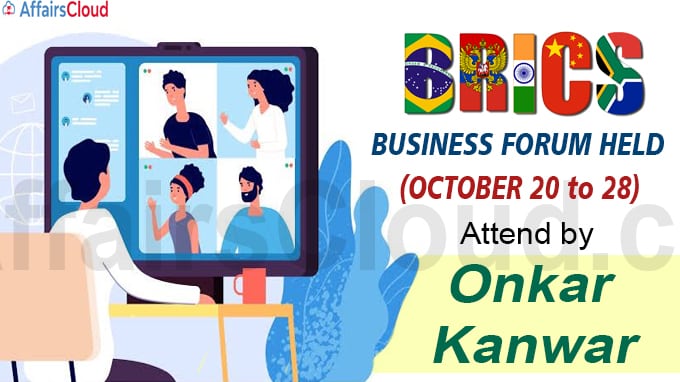 The BRICS (Brazil, Russia, India, China & Republic of South Africa) Business Forum was held virtually from October 20-28, 2020. The meeting is being held online for the first time due to Pandemic (originally planned to be held in Moscow(Russia), and St. Petersburg (Russia)).

ii.The meeting was chaired by the Head of Russian Chapter of BRICS Business Council, President of Chamber of Commerce and Industry of Russian Federation, Sergey Katyrin from Moscow.

iii.About 90 speakers, representatives of executive bodies, monetary institutions, industry and public organizations from all international locations of the Affiliation took part in the Discussion board.

The discussions were held in the Forum under the following topics:

ii.During the session, Agenda for action on climate change and finding ways to sustain economic, industrial and energy development were discussed.

v.The forum discussed the impact of pandemic on industrial production, ways to restore economies of BRICS countries, the possibility of digitization and automation in creating favorable climate.

vi.The forum considered the development of the Women’s Alliance within BRICS.

ii.The topic of the meeting of leaders will be “BRICS Partnership in the Interests of Global Stability, Common Security and Innovative Growth”.

i.It was first created in 2013 at BRICS Summit in Durban, South Africa to bring together the private sector from Brazil, Russia, India, China and South Africa.

ii.It was established to Strengthen and promote economic, business and investment ties among business communities of BRICS countries.