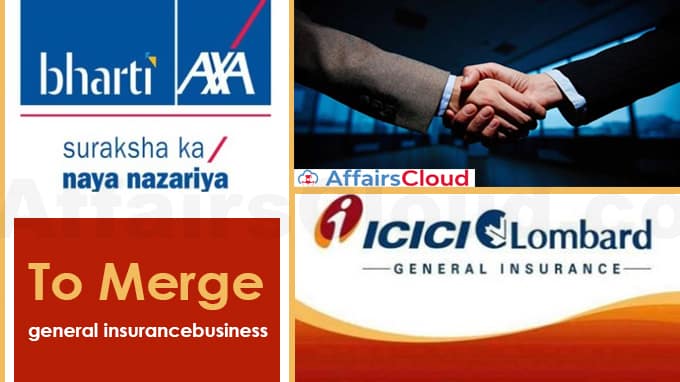 ICICI Lombard General Insurance Co. Ltd.(ICICI Lombard) and Bharti AXA General Insurance Co. Ltd.(Bharti AXA) have signed definitive agreements to merge their insurance business. The merger will happen through a scheme of arrangement. The proposed merged non-life insurance company(combined entity) will have a market share of 8.7% on a pro-forma basis. The deal values Bharti AXA at around Rs 2,700 crore.

Note– The financial details were not disclosed.

Highlights of the merger

i.The shareholders of Bharti AXA will receive 2 shares of ICICI Lombard for every 115 shares of Bharti AXA, held by them as on the date on which the scheme is approved by the board.

ii.This decision is based on the share exchange ratio as recommended by independent valuers and accepted by the respective boards of ICICI Lombard and Bharti AXA.

ICICI Bank Ltd’s holdings in ICICI Lombard comes down to 48.11%

Currently promoter ICICI Bank Ltd holds is 51.89% stake in ICICI Lombard & the rest by the public. After the deal ICICI Bank Ltd stake will come down to 48.11%.

ii.Post the merger, no special rights will be given to Bharti Enterprises or AXA and they will be categorised as public shareholders in the combined entity after the deal.

iii.Both Bharti Enterprises and AXA will exit non-life business after the merger

Total Annual Premium to be earned

The proposed merged non-life insurance company is expected to earn a total annual premium of at least Rs 16,447 crore on a combined basis with a market share of around 8.7%.

The proposed transaction is subject to various conditions, including regulatory approvals from following:

The Insurance Regulatory and Development Authority of India(IRDAI), Competition Commission of India(CCI), The Securities and Exchange Board of India(SEBI), Stock Exchanges, Reserve Bank of India(RBI), National Company Law Tribunal(NCLT) and approval of shareholders of both ICICI Lombard and Bharti AXA, among others.

i.Deutsche Bank and Google Cloud have proposed to enter into a strategic, multi-year partnership. The partnership focuses on redefining how the bank develops and offers its financial services.

ii.Visa, enters into partnership with Federal Bank to deploy Visa Secure to the bank’s cardholders. Visa Secure will provide additional authentication layers for issuers and merchants to combat online frauds.