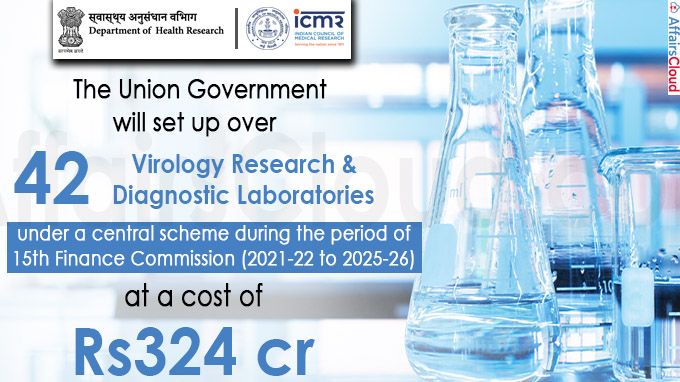 The Central Government is all set to expand its lab testing infrastructure by establishing over 42 Virology Research and Diagnostic Laboratories (VRDLs) at a cost of Rs 324 crore during the period of 15th Finance Commission (2021-22 to 2025-26).

MoST set up a first-of-its-kind ‘Centre of Excellence’ in the Northeast; Located in Kimin, Arunachal Pradesh

i.The Ministry of Science and Technology (MoST) will launch a first-of-its-kind Centre of Excellence (CoE) in the Northeast i.e. ‘Centre for Bio-Resources and Sustainable Development’ at Kimin in Papum Pare district of Arunachal Pradesh (AR).
ii.The establishment of the Centre was sanctioned by the Department of Biotechnology (DBT), MoST and is already complete for formal inauguration.
iii.This decision has been taken to push digital initiatives in the north eastern states under the Centre’s flagship Digital India programme.
About Ministry of Science and Technology (MoST):
Dr Jitendra Singh Constituency– Udhampur, Jammu and Kashmir
Departments– Department of Science & Technology (DST), Department of Biotechnology (DBT), and Department of Scientific & Industrial Research (DSIR)
Principal Scientific Adviser to the Government of India– Dr. Krishnaswamy VijayRaghavan
>>Read Full News 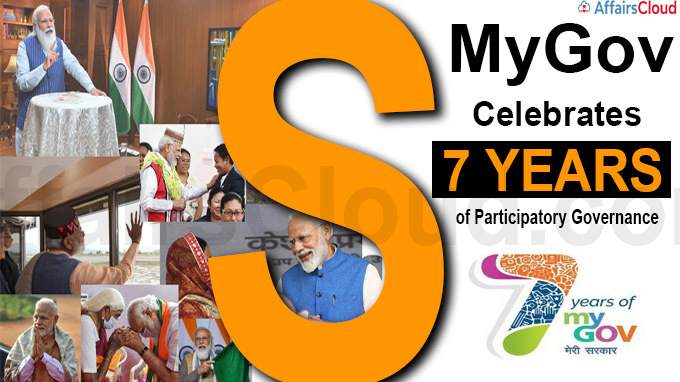 India’s Citizen Engagement Platform ‘MyGov’ celebrated the 7th Anniversary of its launch on July 26, 2021. The platform was launched by Prime Minister Narendra Modi on 26th July 2014 to promote the active participation of Indian citizens in their country’s governance and development. 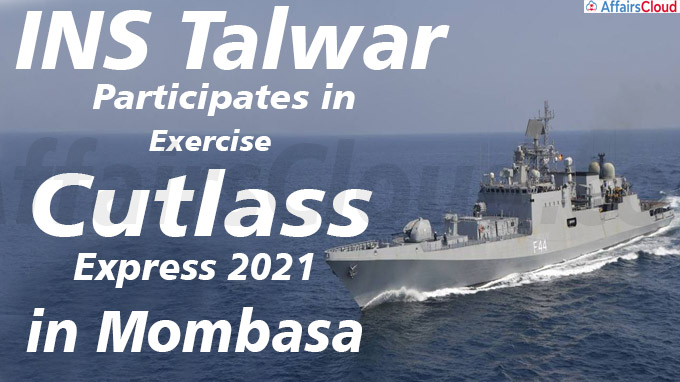 Indian Naval Ship (INS) Talwar visited Mombasa, Kenya to participate in Exercise Cutlass Express 2021 (CE21). The Annual Maritime Exercise is to be conducted from 26 July, 2021 to 6th August, 2021 along the East Coast of Africa.

LohumCleantech, a lithium-ion(Li-ion) battery maker and a battery recycling solutions company, plans to set up India’s largest3 GWh Li-ion manufacturing as well as recycling plant in Greater Noida, Uttar Pradesh with an investment of Rs 300 crore within 18 months. 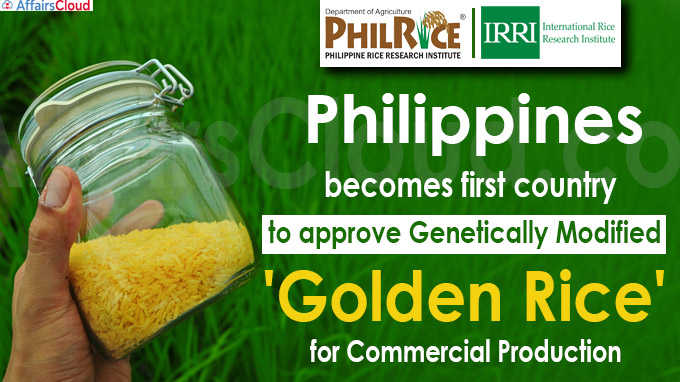 The Philippines became the World’s 1st Country to approve Genetically Modified (GM) ‘Golden Rice’ for Commercial Production. The GM rice will help in increasing the rice productivity in the country.

Importance of Vitamin A
The Vitamin A enriched in the rice is essential for normal growth and development, and for proper functioning of the immune system, and vision. 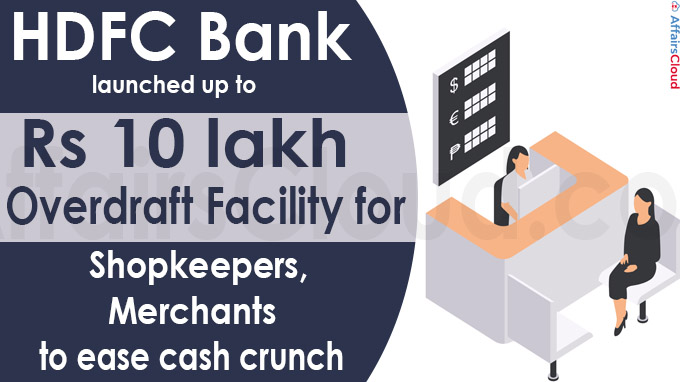 On July 26, 2021, HDFC Bank, the largest private lender of India, in collaboration with Common Services Centres (CSC) e-Governance India Ltd, Special Purpose Vehicle (CSC SPV), launched an OverDraft (OD) scheme named ‘Dukandar Overdraft Scheme’ to provide financial assistance up to Rs 10 lakh to small retailers.
Features of Dukandar Overdraft Scheme:
i.Eligibility: Small retailers who are operating for a minimum of 3 years are eligible under the scheme.
ii.OD limit: The overall limit of OD was from Rs 50,000 to Rs 10 lakhs. For shops that are operational for less than 6 years, the upper limit will be Rs 7.5 lakhs and for those who are in business for more than 6 years,the limit is Rs 10 lakhs.
About CSC Special Purpose Vehicle (CSC SPV):
CSC SPV, the government’s e-governance services delivery arm was set up by the Ministry of Electronics & IT under the Companies Act, 1956 to oversee the implementation of the CSC scheme.
MD – Dinesh Kumar Tyagi
>>Read Full News 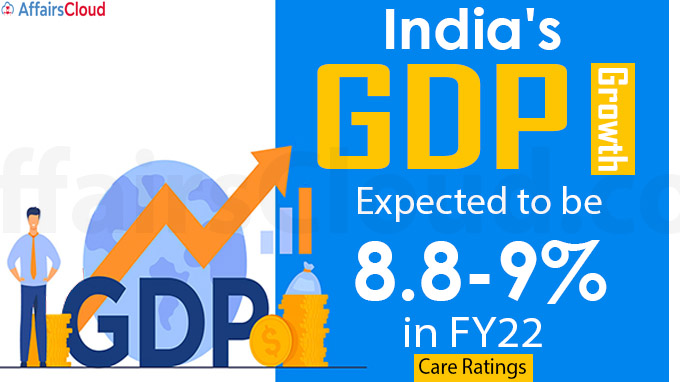 Care Ratings has estimated India’s Gross Domestic Product (GDP) growth forecast in FY22 at the range of 8.8 to 9 percent. Indian economy contracted by 7.3 percent (-7.3) in FY21.
Estimated Projections for FY22 by Care Ratings: Note – The [email protected] – AzadikaAmrutMahotsav, is a series of events to be organised by the Government of India to commemorate the 75th Anniversary of India’s Independence.
What is SEZ?
i.SEZs policy was launched in April 2000 in the Export and Import (EXIM) Policy to attract larger foreign investments in India
ii.SEZ Act, 2005, supported by SEZ Rules, came into effect on 10th February 2006 with objectives to promote exports, investment (domestic & foreign), generate additional economic activity, and employment creation.
About KASEZ:
i.It was Asia’s 1st Export Processing Zone (EPZ) set up in 1965 and now it is considered as India’s largest multi-product functional SEZ.
ii.The SEZ is located at the port town Gandhidham, Gujarat, 9kms away from Kandla port and 60 Kms from Adani Port in Gujarat.

Former PM NajibMikati Named as the New PM-Designate of Lebanon 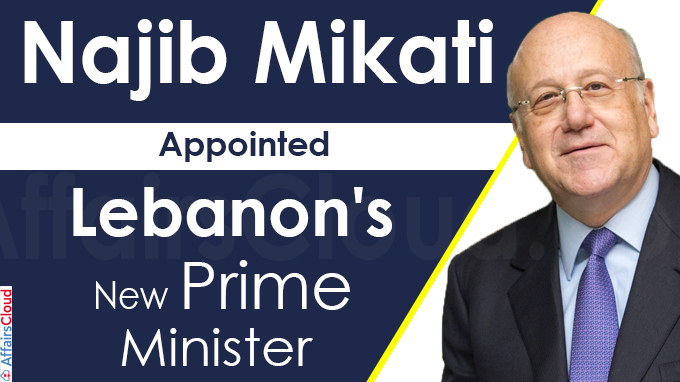 Former Prime Minister(PM) NajibMikati has been appointed as the new Prime Minister-designate of Lebanon. He will succeed former PM Hassan Diab who resigned in August 2020.  According to Forbes, with a net worth of 2.5 billion USD, NajibMikati is the richest man in Lebanon in 2021.

Background:
i.Following the resignation of Hassan Diab, PM-designate Mustafa Adib and Saad Hariri failed to form the government.
ii.PM-designate Saad Hariri resigned as the PM-designate in July 2021.
iii.NajibMikati got 72 votes in the parliament of 118 members.
About NajibMikati:
NajibMikati has previously served as the Prime Minister of Lebanon in 2005 and from 2011 to 2014.
He has also served as the Minister of Public Works and Transport from 1998 to 2004.
About Lebanon:
President– Michel Aoun
Capital– Beirut
Currency– Lebanese Pound The government is set to sell 8% of stakes in Housing and Urban Development Corporation Ltd (HUDCO), a Public Sector Company(PSC) under the Ministry of Housing and Urban Affairs (MoHUA), through an offer for sale(OFS), to raise around Rs 720 crores.

Key Points:
i.This offer of the government to sell around 110 million shares (5.5% stakes) in HUDCO opens for non-retail investors on 27th July 2021, with an additional 2.5% stakes as a Greenshoe option.
ii.The floor price for the sale is Rs 45 per equity share to raise Rs 720 crore.
The non-retail investors get an option to carry forward their unallocated bids to the next day for allocation from unsubscribed portions for retail investors.
Additional info:
i.In this financial year, this is the 2nd time for the government to sell its stake in a PSU through OFS.
ii.Previously the government has sold its shares in NMDC Limited through OFS to meet its Rs 1.75 trillion divestment.
About Housing and Urban Development Corporation Ltd (HUDCO):
HUDCO is a techno-financing public sector enterprise, in the field of housing and infrastructure development in India.
Chairman & Managing Director– Kamran Rizvi
Headquarters– New Delhi 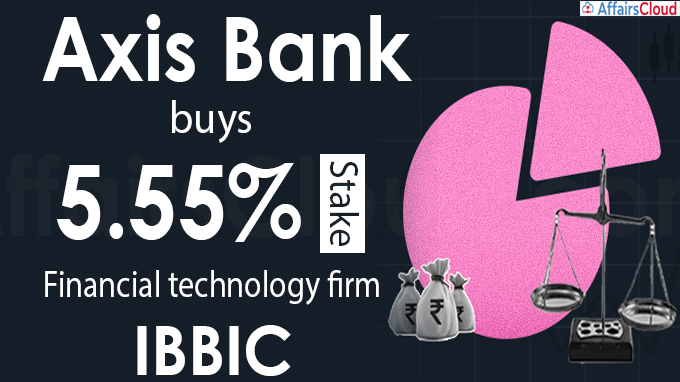 In 2021, Byju’s has acquired 6 startups across India and the United State(US) and in the past 6 months the company has spent more than 2 billion USD on acquisition. 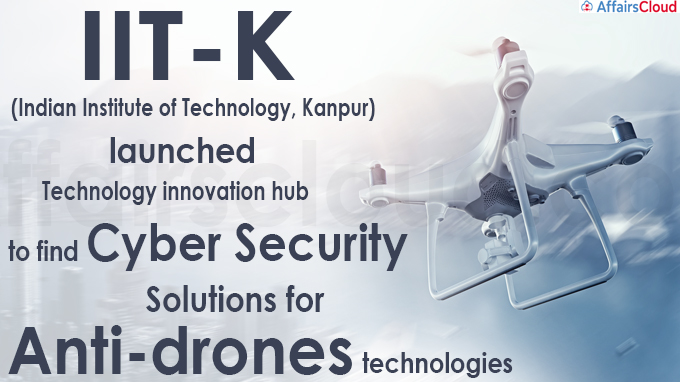 Collaboration will be made between the scientists from India, Russia, Brazil and South Africa to develop or repurpose drugs against Covid-19. This partnership will comprise experts from bioinformatics, organic chemistry, medicinal chemistry, drug screening and parasitologists.

Key Points:
i.As a team, they will work together to repurpose, validate and synthesize lead compounds against main protease and RNA (Ribonucleic acid) replicas, the enzyme that catalyses the replication of RNA of SARS-CoV-2 (severe acute respiratory syndrome coronavirus 2).
ii.Under this, the sharing of efforts, knowledge and experience will enhance the health system and health care in BRICS (Brazil, Russia, India, China, and South Africa) countries.
iii.The scientists will work towards inhibiting maturation and propagation of viruses during the infection in the host cells which can help produce new COVID-19 medicines with improved production methods. 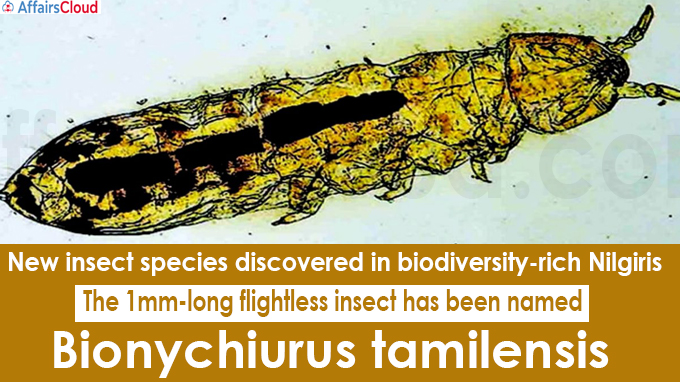 Researchers from the Department of Zoology and Wildlife Biology, Government Arts College, Ooty have discovered a new Wingless Insect ‘Bionychiurustamilensis’ in the Nilgiris, Tamil Nadu (TN). The discovery has been published in the journal ‘Biologia’ published by Springer Nature (Lead Author – MuhsinaThunisa).
i.The insect is endemic to Nilgiris and has been named Bionychiurustamilensis as it was recorded in TN).
ii.There are only 6 species under the Genus ‘Bionychiurus’ across the world.

Characteristics
i.It is a 1 mm-long flightless insect. It decomposes waste materials to nutrients and nourishes the soil.
ii.It was first observed in 2018 in the soil samples collected from Ooty Government Arts College Campus. It showed its presence in grasslands and unpolluted humus soil samples. American Nobel prize-winning physicist Steven Weinberg, the doyen of particle physics, the professor of Physics and Astronomy at The University of Texas, Austin has passed away at the age of 88 in Austin, Texas, United States of America(USA). He was born on 3rd May 1933 in New York, USA.
About Steven Weinberg:
i.Steven Weinberg has served as the professor of Physics at Harvard University and asthe visiting professor at the Massachusetts Institute of Technology(MIT).
ii.He has been a senior scientist at the Smithsonian Astrophysical Observatory from 1973 to 1983.
Awards:
i.Steven Weinberg jointly won the 1979 Nobel Prize in Physics with Sheldon Lee Glashow and Abdus Salam “for his contribution to the theory of the unified weak and electromagnetic interaction between elementary particles, including, inter alia, the prediction of the weak neutral current.”
ii.National Medal of Science(Physical Sciences) in 1991
iii.Benjamin Franklin Medal for Distinguished Achievement in the Sciences Recipients in 2004.
Books:
He has published more than 350 scientific and other articles, and 15 books including,The First Three Minutes—A Modern View of the Origin of the Universe (1977); Dreams of a Final Theory (1993) and To Explain the World – The Discovery of Modern Science (2015). 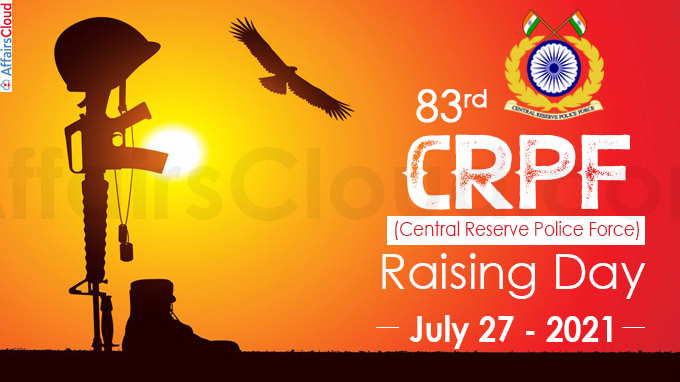 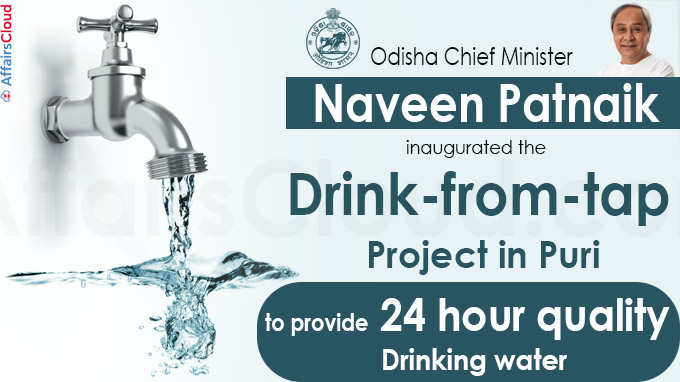 On July 26, 2021, Odisha Chief Minister Naveen Patnaik inaugurated the ‘Sujal -Drink-from-Tap’ project in Puri, the coastal city in Odisha to provide 24×7 piped pure drinking water. Through the launch, Puri has become the 1st city in India to implement such a project. 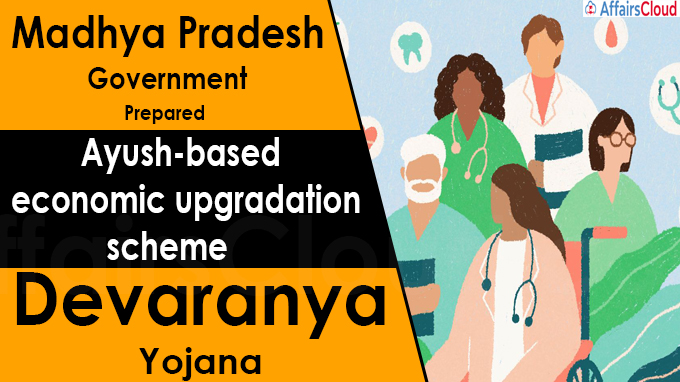