The Ministry of Home Affairs (MHA) has extended the validity of registration certificates granted to Non-Government Organisations (NGOs) under the Section 50 of Foreign Contribution (Regulation) Act (FCRA), 2010 until September 30, 2021 due to restrictions imposed in view of COVID-19.

i.The MHA has also issued an order stating that NGOs have to open an  ‘FCRA account’ at State Bank of India, New Delhi Main Branch (SBI NDMB) before June 30, 2021.

Ministry of Social Justice: ELDERLINE – Helpline for senior citizens to be functional in all States by end of May 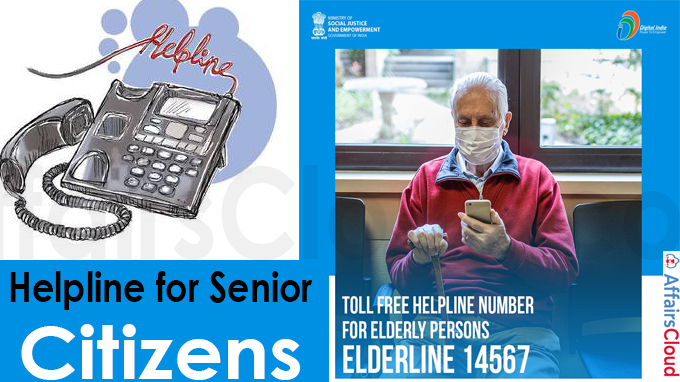 The Ministry of Social Justice & Empowerment has started state-wise call centres under the Elderline project to address the difficulties faced by the elders due to the ongoing COVID-19 pandemic. The elderly can reach the call centres through the toll-free number – 14567.
The Ministry is working towards making the call centres functional in all the states by the end of May 2021. 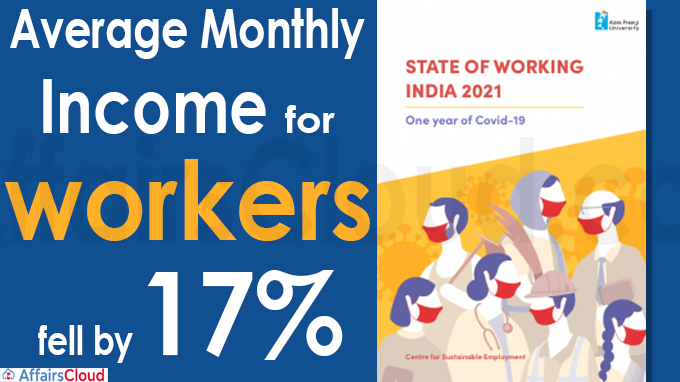 According to ‘State of Working India 2021: One Year of COVID-19’ released by Azim Premji University’s Centre for Sustainable Employment (CSE) in Bengaluru, Karnataka, the monthly earnings of workers fell on an average by 17% due to COVID-19, self-employed and informal salaried workers faced the highest loss of earnings.

The Government of India’s citizen engagement platform – MyGov in association with the Department of Higher Education (DHE) has launched an innovation challenge, for developing an application on “Indian Language Learning”.
Aim:
To create an app that will promote regional language literacy, thereby creating greater cultural understanding within the country.
Key points:
i.The app is to be developed for an individual to learn simple sentences of any Indian language and acquire knowledge in a language.
ii.The Innovation Challenge is open to Indian individuals, startups and companies.
iii.The top 3 will receive funding of 20 lakh rupees, 10 lakh rupees and 5 lakh rupees to make the apps better. According to a new study conducted by the World Health Organization (WHO) and the International Labour Organization (ILO), Long working hours are putting more people at risk of work-related disability and early death due to Stroke & Ischemic Heart Disease. The study is the 1st of its kind on loss of life and health associated with working long hours. 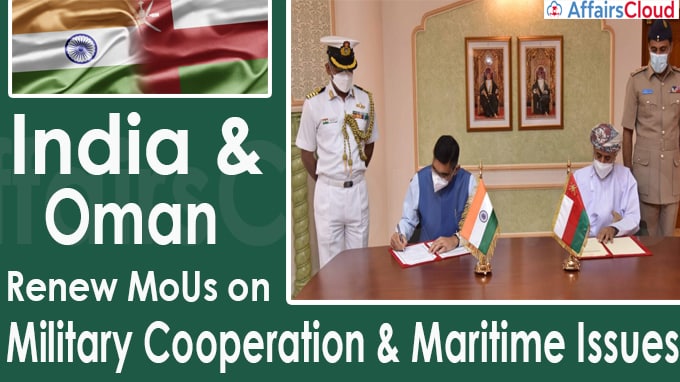 India & Oman renewed 2 Memorandum of Understanding (MoUs) signed between the two sides in 2018 for Military cooperation along with its annexure on maritime issues. Key points:
i.This was the first FPI license issued to an AIF in GIFT IFSC by any custodian bank or Designated Depository Participant in India.
ii.AIF became an important business vertical at GIFT IFSC as it will offer huge benefits and a competitive edge for setting up funds in IFSC at GIFT City.
FPI – It means the investments made by investors in financial assets, such as stocks and bonds of entities located in another country.
About True Beacon
Establishment – 2019
Headquarters – Bangalore, Karnataka
Co-founder and CEO– Richard Pattle
>>Read Full News Alankit Imaginations Ltd, a subsidiary of Alankit made partnership with Digital Swiss Gold (DSG) to enable individuals to transact in gold digitally in Switzerland.

Key points:
i.An individual can buy gold starting from 1 gram and to a maximum limit of $2,50,000 per financial year under the Liberalised Remittance Scheme of the Reserve Bank of India(RBI).
ii.Under this collaboration DSG will offer competitive and transparent pricing, which will save up to 10 percent compared to published Indian gold prices, as the gold is sourced directly from Swiss refineries and eliminating middlemen.
iii.DSG allows a buyer to gift someone (after requisite formalities) and the physical transfer of gold is also applicable after paying the customs and other regulatory clearance
iv.DSG’s gold have the highest standards of 0.9999 fineness and also in compliant with all London Bullion Market Association (LBMA) gold bar specifications.
About Digital Swiss Golds(DSG):
Headquarters(India) – NewDelhi
Headquarters(Global) – St. Helier, Jersey
CEO –  Ashraf Rizvi 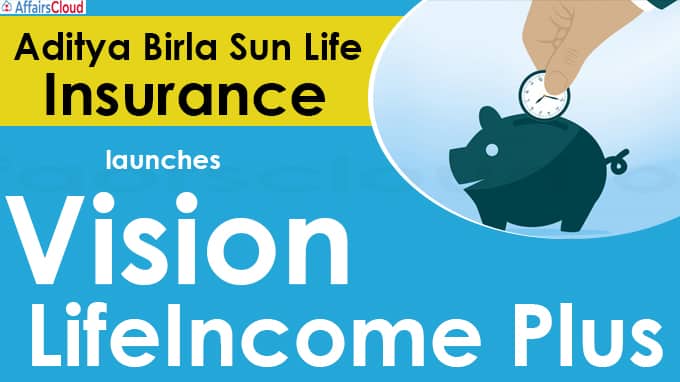 Note – Non-Linked Insurance Plans are plans that are not linked to the stock market. It provides low-risk returns and a well-defined maturity amount and bonuses.
About the savings plan:
Key points:
i.The savings plan provides a guaranteed regular income for the customers up to 30 years with the benefits of a life insurance cover.
ii.It provides tax-free guaranteed additional income for life, apart from offering the benefit of liquidity or cash in hand whenever the customer requires funds.
Choice of 3 Benefit options:

The Securities and Exchange Board of India (SEBI) has imposed a penalty of Rs 5.25 crore on Cairn India for making a misleading announcement regarding the buyback of shares on January 14, 2014.
i.SEBI has also imposed fine of Rs 15 lakh each on P Elango (CEO and director of Cairn), Aman Mehta (director of Cairn’s board), and Neerja Sharma (director risk assurance and secretary of Cairn).
ii.Misleading over Buyback of shares: In January 2014, Cairn India and its directors made the public announcement of buyback but not utilised the minimum amount of 50 percent of the buyback size (despite the conditions were favourable to the company) and violated the various provisions SEBI’s Prevention of Fraudulent and Unfair Trading Practices (PFUTP) rule and Buyback Regulations. 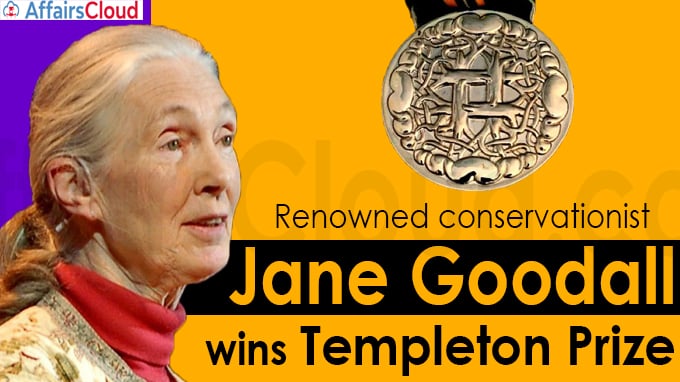 The prestigious Templeton Prize for the year 2021 was given to conservationist Jane Goodall.She was renowned for her expertise on chimpanzees and her globe-spanning advocacy of environmental causes.
i.Jane Goodall is an English primatologist,anthropologist and the world’s foremost expert on chimpanzees.
ii.She was the first to observe human-like behaviours amongst chimpanzees such as creating tools, and she demonstrated that they have individual personalities while she was in Gombe Stream National Park in Tanzania in 1960.
About Templeton Prize: 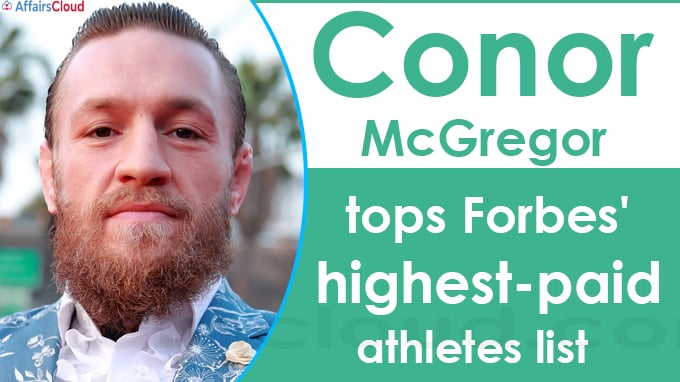 Click here for the complete list: Forbes’ World highest-paid athletes for 2021
Highlights:
i.This is the first time where the top four athletes have earned over 100 million USD each.
ii.The total earning of the top 10 is around 1.05 billion USD which is around 28% more than the total earning of the top 10 athletes of 2020(819.2 million USD).
iii.20-time Grand Slam champion Roger Federer ranked who topped the 2020 list ranked 7th in the 2021 list with a total earning of 90 million USD.
iv.Cristiano Ronaldo, LeBron James and Roger Federer have remained constant on the Forbes top 10 lists for 10 years.
About Conor McGregor:
i.Conor McGregor (32 years old) has competed in only one Ultimate Fighting Championship (UFC) bout held in January 2021 where he lost to Dustin Poirier.
ii.He has made around 158 million USD through off-field activities which made him the 3rd sports personality after Tiger Woods and Roger Federer to earn more than 70 million through off-field activities in a year.
iii.In 2018 he was featured among the top 10 Highest-paid Athletes, ranked 4th. On 20th May 2021,Pinarayi Vijayan was sworn in as Kerala Chief Minister for a second time, after guiding the CPM-led Left Democratic Front government to a historic second successive term in the 2021 election
Key points:
i.He is the first Chief Minister in Kerala to get a second consecutive term.
ii.The Left Democratic Front (LDF)alliance won 99 of 140 seats in this election.
iii.The Governor Arif Mohammed Khan administered the oath of office and secrecy to Chief Minister-designate Mr. Vijayan and 20 members of his Cabinet at the Central Stadium, located behind the Government Secretariat.
Note:

Sir David Attenborough, world-renowned broadcaster and natural historian, has been appointed as the People’s Advocate for the 26th United Nations (UN) Climate Change Conference of the Parties (COP26)-2021, which will be held in Glasgow, Scotland, United Kingdom (UK) in November 2021.UK and Italy will host COP-26. 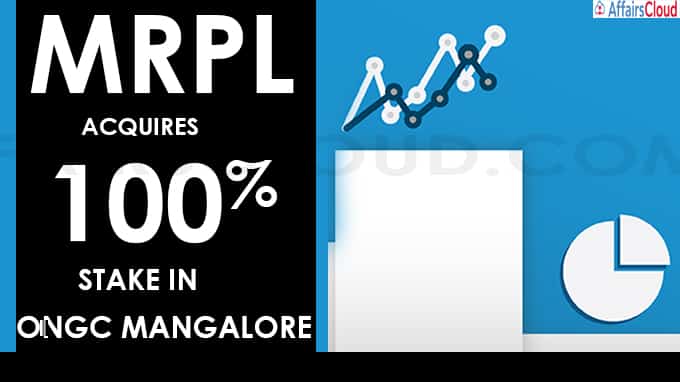 Background:
i.In October 2020, the board of MRPL had approved the acquisition of 1,24,66,53,746 equity shares of Rs10 each of OMPL, a subsidiary of MRPL from ONGC. (paved the way for merging OMPL with MRPL)
ii.A Share Purchase Agreement (SPA) was executed between ONGC and MRPL for the acquisition, according to the SPA, ONGC transferred an amount of ₹1216,73,40,561 for the acquisition of 124,66,53,746 equity shares of OMPL to MRPL’s Demat account on January 1, 2021, at a price of ₹9.76 per share.
iii.With this, the shareholding of MRPL in OMPL increased to 99.9998 percent.
About ONGC Mangalore Petrochemicals Ltd (OMPL):
OMPL is the largest single stream unit in Asia to produce 914 KTPA paraxylene and 283 KTPA benzene, its turnover stood at ₹3,388.79 crores in 2020-21 as against ₹4,954.17 crores in 2019-20.
Establishment – December 19, 2006
About Mangalore Refinery and Petrochemicals Ltd (MRPL):
Establishment – 1988 (Acquired by ONGC in March 2003)
Headquarters – Mangaluru, Karnataka
Chairman – Subhash Kumar
Managing Director – M. Venkatesh Indian Meteorological Department (IMD) stated that the ‘extremely severe cyclonic storm’ – ‘Tauktae’ made landfall in the Saurashtra region of Gujarat. The cyclone originated from the Arabian Sea.

Who names the Cyclones?
IMD is among the 6 Regional Specialised Meteorological Centres (RSMC) in the world. 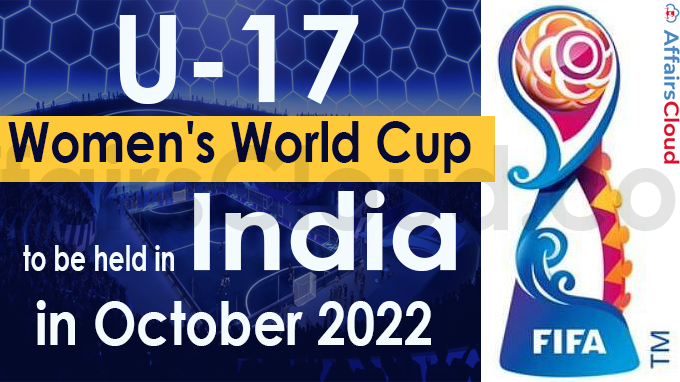 On the 71st Federation Internationale de Football Association(FIFA) Congress, the FIFA Council approved key dates for the international match calendars. In which it also announced the dates of the 2022 U-17 Women’s world Cup in India to be held from October 11 to 30 in 2022.

Background:
i.Earlier India was scheduled to host the 2020 U-17 World Cup and it was postponed to 2021 later cancelled due to the COVID-19.
ii.FIFA made India as the host of the 2022 edition of U-17 Womens’ world Cup in November 2020.
About Federation Internationale de Football Association (FIFA):
Headquarters– Zurich, Switzerland.
Motto– For the Game. For the World.
President– Gianni Infantino. 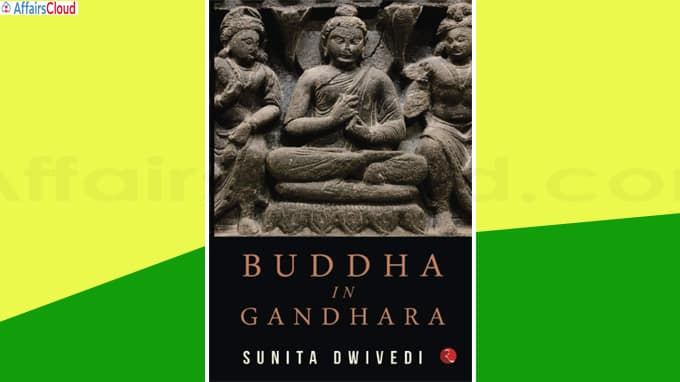 A book titled “Buddha in Gandhara” by Sunita Dwivedi is Published by Rupa Publications.It is a Travelogue about the journey through the cities that once dotted the highroad connecting India with Central Asia and China.
About the Book:
i.Buddha in Gandhara is the Story of ancient Buddhist cities of Gandhara,a region that extended from north-western Pakistan to eastern and north-eastern Afghanistan.
ii.The book recreates a journey on the Buddha’s trail along the Lahore-Taxila-Peshawar-Kabul-Bamiyan-Balkh-Samangan route. These splendid cities were once centres of trade and scholarship.
iii.It traces the network of Asian trade routes that nourished these cities with goods, people and ideas.
iv.It also trains the spotlight on the magnificent art of Gandhara that still clings to the ruins of these heritage cities and also those that are showcased in the museums of Asia and Europe.
About Sunita Dwivedi:

A book titled ‘The Spiritual CEO’ by S Prakash

A New book titled “The Spiritual CEO” penned by President of Heartfulness Institute, S Prakash. This book deals with the roadmap for how to build a better business, live a better life and all through the simple practice of ”Korporate Karma”. The book was published by Westland Publication. 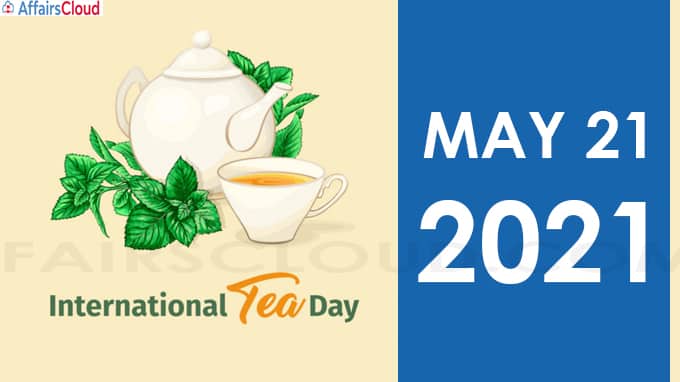 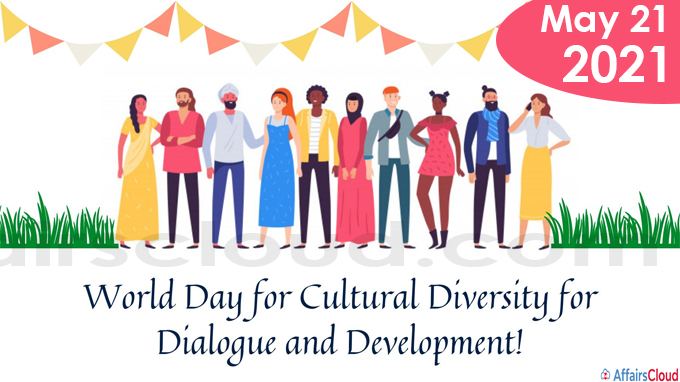 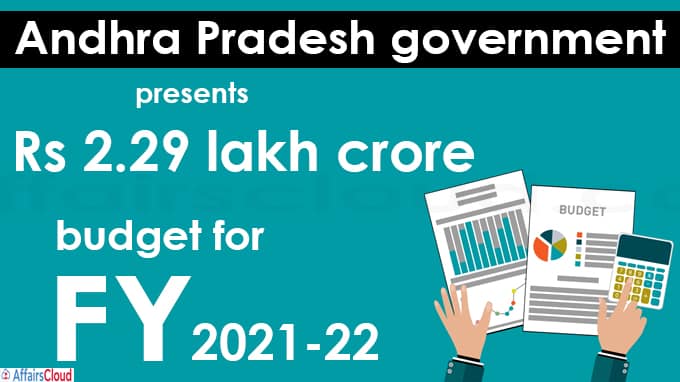 The Uttarakhand police launched a drive “Mission Hausla” to help people COVID-19 patients to get oxygen, beds and plasma. The police are also supporting the people to get ration and help them with ambulance service, cremation of bodies as a part of the mission.