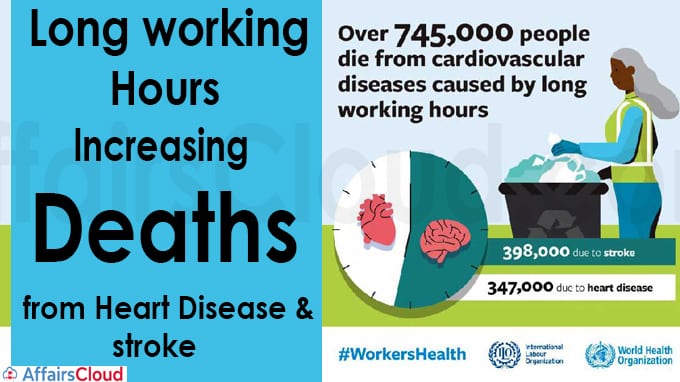 According to a new study conducted by the World Health Organization (WHO) and the International Labour Organization (ILO), Long working hours are putting more people at risk of work-related disability and early death due to Stroke & Ischemic Heart Disease. The study is the 1st of its kind on loss of life and health associated with working long hours.

Analysis of Loss of Life and Health

ii.Work-related disease burden is significant in men, with 72% of death among males.

During the pandemic, the number of people working long hours is increasing, putting more people at risk of work-related disability and early death.

December 5, 2020, According to “Global Wage Report 2020-21: Wages and minimum wages in the time of COVID-19” released by ILO, Women and Lower-paid workers were impacted the most due to decrease in wages because of reduced working hours during the COVID-19 crisis.