We are here for you to provide the important Recent and Latest Current Affairs 13 May 2021, which have unique updates of Latest Current Affairs 2021 events from all newspapers such as The Hindu, The Economic Times, PIB, Times of India, PTI, Indian Express, Business Standard and all Government official websites. According to the new report ‘Renewable Energy Market Update – Outlook for 2021 and 2022’ released by International Energy Agency (IEA), India’s Renewable Energy capacity addition declined by almost 50% to 5.62 GigaWatts (GW) in 2020 (compared to 2019).
i.The decline in capacity addition in India has been attributed to the COVID-19 pandemic.
ii.At the Global level, the annual renewable capacity additions increased 45% to almost 280 GW (up from 190 GW in 2019), which is the highest year-on year increase since 1999. 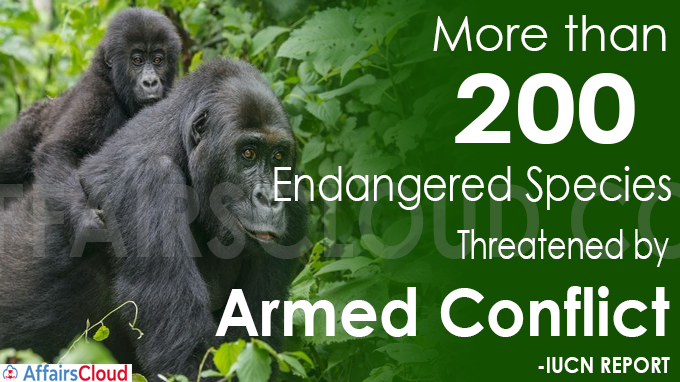 According to the report ‘Nature in a Globalised World: Conflict & Conservation’ released by International Union for Conservation of Nature (IUCN) – Civil unrest and military exercises pose high risk to 219 Endangered Species (out of 30, 178 species assessed as threatened on the IUCN Red List of Threatened Species). Geojit Financial Services has entered into an agreement with the Punjab National Bank (PNB) to provide the advantage of a three-in-one account to the customers of PNB. (The Three Accounts are,  Savings Account,a Demat Account and a Trading Account).
Key points: 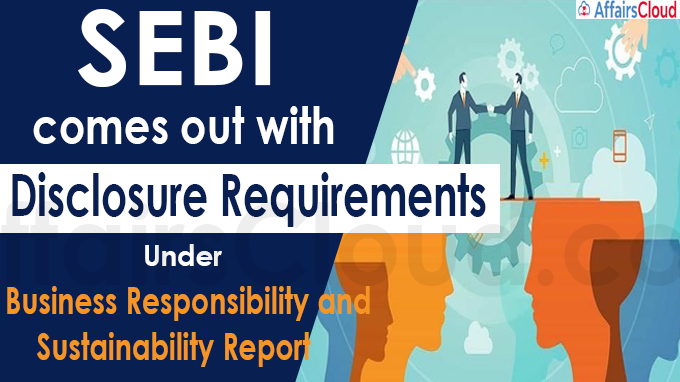 On May 11,2021, under Section 11(1) of the Securities and Exchange Board of India(SEBI) Act, 1992 read with Regulation 101 of the Listing of Obligations and Disclosure Requirements (LODR), SEBI issued new disclosure norms over the Business Responsibility and Sustainability Report (BRSR), for the top 1,000 listed companies (by market capitalisation) by FY23.
Background:
i.On November 04, 2015, SEBI has prescribed the format for the Business Responsibility Report (BRR)in respect of reporting on ESG (Environment, Social and Governance) parameters.
ii.On May 05, 2021, SEBI amended the Listing of Obligations and Disclosure Requirements (LODR) rules and decided to introduce new reporting requirements on ESG parameters called – BRSR (sustainability-related reporting).
Key points:
i.In order to give time to adapt to the new requirements, the companies are allowed to report BRSR on a voluntary basis for FY22 and it was made mandatory from FY23.
ii.Under BRSR the listed entities have to make disclosures on their performance against the 9 principles of the ‘National Guidelines on Responsible Business Conduct’(NGBRC).
About Securities and Exchange Board of India (SEBI):
Establishment – 1992
Headquarters – Mumbai, Maharashtra
Chairman – Ajay Tyagi
>>Read Full News In its mid-year report of the World Economic Situation and Prospects (WESP), United Nations(UN) has increased India’s GDP growth forecast for the calendar year 2021 to 7.5 percent, a 0.2 percent increase from its earlier projection (January 2021 projection – 7.3 percent) following a contraction of 6.8 percent (-6.8) in 2020.

Key points about the Report:
i.The UN stated India’s growth outlook of 2021 as “highly fragile” due to COVID-19.
ii.India’s investment growth fell to 10.2 percent in 2021(3rd largest among the G20 Nations)
iii.The global economy is projected to expand by 5.4 percent in 2021 following a sharp contraction of 3.6 per cent in 2020
Points to be noted about UN: 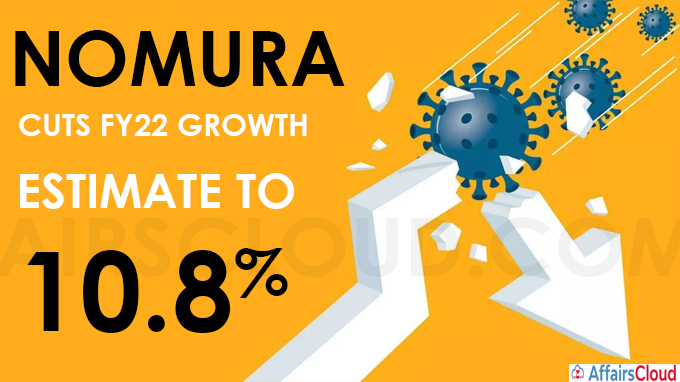 About CRISIL’s forecast on India’s Growth:
CRISIL (Credit Rating Information Services of India Limited) has estimated India’s growth estimation to be “firmly tilted downwards” in the range of 9.8-8.2% in FY22 from 11 percent. (Due to the second wave of Covid-19, Crisil estimated the 9.8 percent growth in May-end and 8.2 percent in June-end). 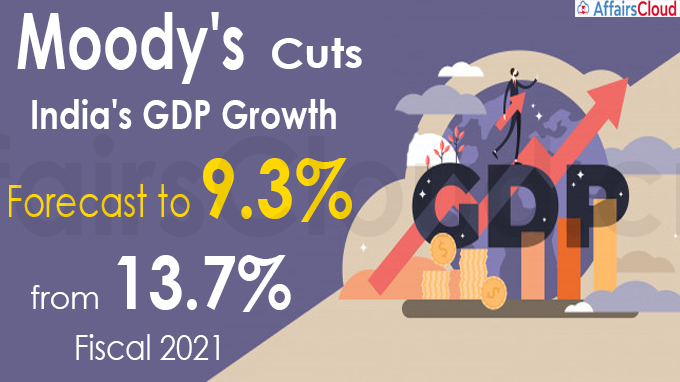 Key points:
i.It has a ‘Baa3’ rating on India with a negative outlook, due to the barrier over economic growth, high debt and weak financial system due to COVID1-19.
ii.The rating agency also hiked its expected general government fiscal deficit to 11.8 percent of GDP in FY22, compared with the previous forecast of 10.8 per cent.
Care Ratings Cuts India’s GDP to 9.2% for FY22:
The domestic rating agency, Care Ratings revised its GDP growth forecast for FY22 to 9.2 percent from 10.2 percent.
i.This is the 4th revision by the rating agency in its GDP growth forecast for FY22 since March 2021.
ii.It has stated the growth of 3.3-3.5 percent in the agriculture sector, 9.5-10 percent in the industry sector, and 9-9.5 percent in the services sector.
About Care Ratings:
Establishment – April 1993
Headquarters – Mumbai, Maharashtra
MD & CEO – Mr. Ajay Mahajan
>>Read Full News Indian Descent Dr Shakuntala Haraksingh Thilsted, a native of Trinidad and Tobago and a citizen of Denmark, won the 2021 World Food Prize for her research, insights and innovations in developing holistic, nutrition-sensitive approaches to aquaculture and food systems. She was born in 1949 on the Caribbean island of Trinidad. Padmakumar Madhavan Nair, Chief General Manager of Stressed Assets Resolution Group at State Bank of India(SBI) appointed as the 1st Chief Executive Officer(CEO) of the National Asset Reconstruction Company Ltd (NARCL). (At present, he will be joining the company on deputation basis)

Note – Bad bank refers to a financial institution that takes over bad loans of lenders and undertakes resolution.
Background:
In the budget for 2021-22, Finance Minister Nirmala Sitharaman announced the set-up of an Asset Reconstruction Company (ARC)/bad bank to consolidate and take over existing stressed assets of lenders and undertake their resolution.
About Asset Reconstruction Company(ARC):
i.It is a financial institution (FI) that buys the NPAs (Non-Performing Assets) or bad loans from banks and FI and helps them to recover from the NPAs.
ii.They are registered under RBI and regulated under the Securitisation and Reconstruction of Financial Assets and Enforcement of Securities Interest (SARFAESI) Act, 2002.
iii.Capital needs: The net owned funds of ARCs should be Rs 100 crore or more and they also have to maintain a capital adequacy ratio of 15 percent of its risk-weighted assets.
>>Read Full News 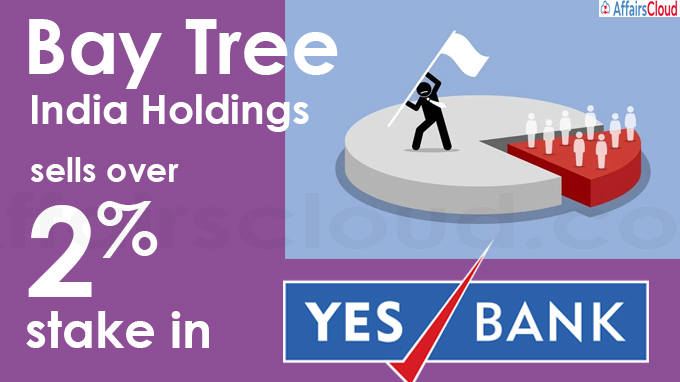 Key Points:
i.Bay Tree India Holdings I LLC held 7.48 per cent stake in YES Bank earlier and sold 52.15 crore shares representing 2.08 percent of equity stake in multiple tranches between January 6 and May 6, 2021.
ii.In July 2020, a day ahead of its follow-on public offering ,Yes Bank garnered Rs 4,098 crore from anchor investors.
iii.Last year Bay Tree was the largest anchor investor in Yes Bank having about 55% of the investor portion worth 22 billion rupees in $2 billion equity of YES bank.
iv.It’s now the second-largest single shareholder after State Bank of India. 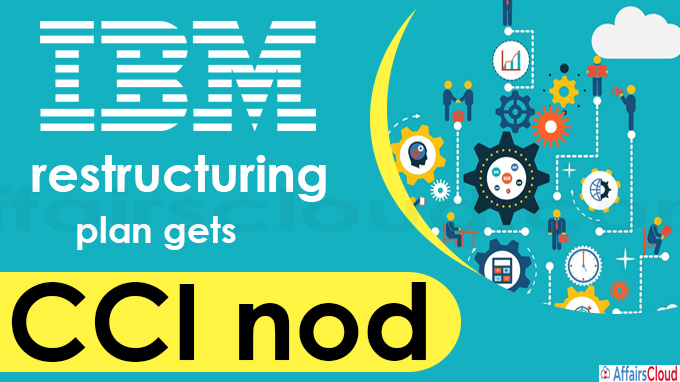 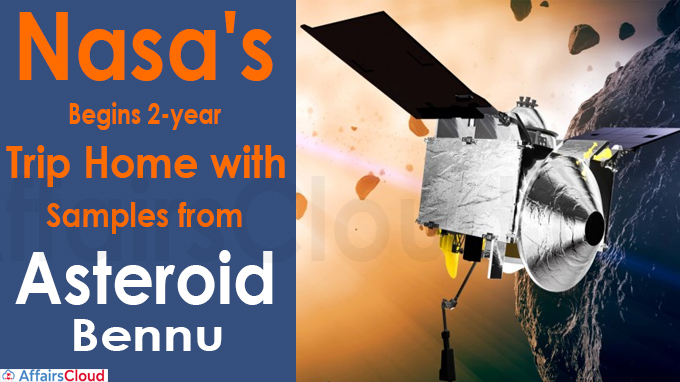 About OSIRIS-REx:
Mission: Travel to near-earth asteroid Bennu and bring a small sample to Earth for study.
i.Spacecraft OSIRIS-REx was launched on 8th September 2016, from Cape Canaveral Air Force Station to Asteroid Bennu.
ii.The Spacecraft reached Bennu in 2018 and it is estimated to return a sample to Earth in 2023.
iii.The sample collector of OSIRIS-REx is called the Touch-And-Go Sample Acquisition Mechanism (TAGSAM) head.
The collected samples were stored in the Sample Return Capsule(SRC).
Note:
Japan is the only other country to achieve this feat.
Sample Return Capsule(SRC):
i.The Sample Return Capsule(SRC) containing the sample from Bennu will detach from the spacecraft and enter the Earth’s atmosphere.
ii.The capsule will parachute to the Utah Test and Training Range, West Desert, Utah, which will be retrieved by the Scientists.
Note:
It is estimated that the SRC holds between 200 grams and 400 grams of sample, which exceeds the target of at least 60 grams (2 ounces).
Additional Info:
i.NASA is set to launch a spacecraft named “Lucy” in October 2021 to fly past the asteroids near Jupiter.
ii.The Spacecraft named Dart is set to launch in November 2021 with an aim to redirect the Asteroid as a part of the planetary protection test. 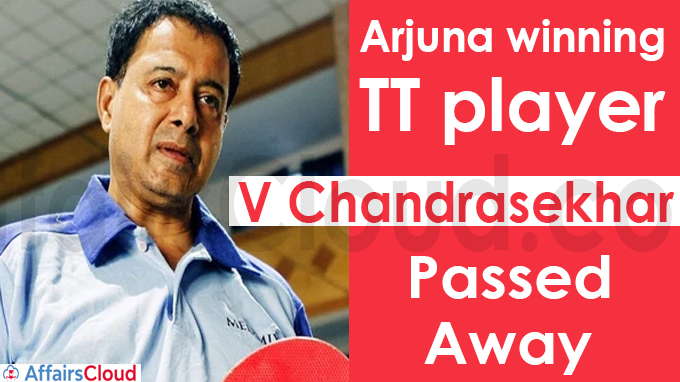 Arjuna Awardee Venugopal Chandrasekhar, former Indian Table Tennis(TT) player passed away due to COVID-19 related complications in Chennai, Tamil Nadu. He was born in Chennai, Tamil Nadu. V Chandrasekhar is popularly known as a 3 times national champion.
About V Chandrasekhar:
i.V Chandrasekhar represented India in the Commonwealth Games in 1982.
ii.He has also served as a coach.
iii.He was honoured with the Arjuna Award in 1982.
iv.He served as the President of Tamizhaga Table Tennis Association.
v.His Autobiography titled “My fightback from Death’s Door” was published in 2006. 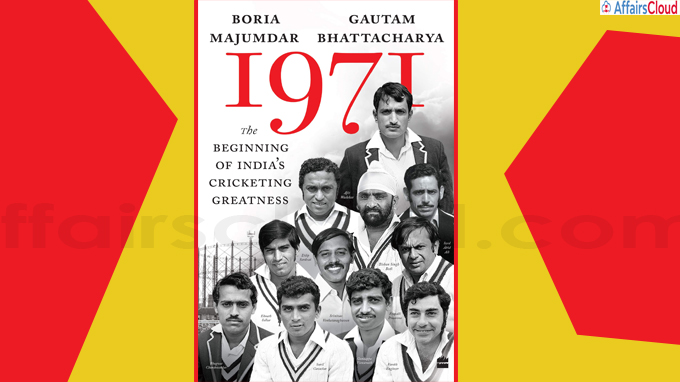 A Book titled “1971: The Beginning of India’s Cricketing Greatness” by Boria Majumdar and Gautam Bhattacharya will be published by HarperCollins.

About the Book:
This Book is a thrilling account of the 1971 twin tours.i.e. India tour to England.During the Tour to England, India won the Test Series against England.Indian Team was captained by Ajit Wadekar.The Second Tour was India tour to West Indies.During the Tour India won by defeating West Indies.Indian Team was Captained by Ajit Wadekar.
About the Authors:
i.Boria Majumdar, a Rhodes Scholar, is the author of multiple books on Indian sport and its history, and the co-author of Sachin Tendulkar’s autobiography Playing It My Way.
ii.Gautam Bhattacharya, currently the Joint Editor of Kolkata’s leading daily Sangbad Pratidin, has been a longstanding cricket writer and commentator and is the author of several books.He is the co-author of Sourav Ganguly’s book A Century is Not Enough. 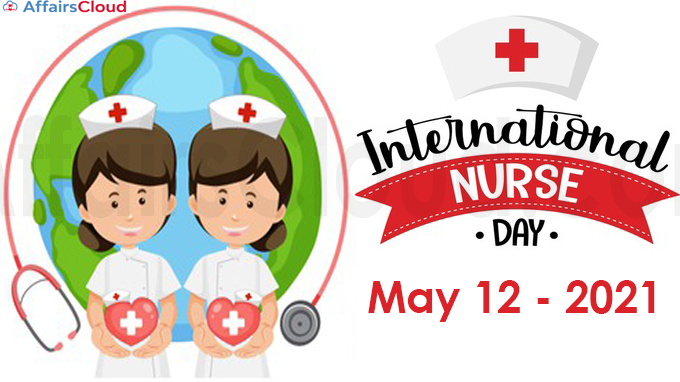 The International Nurses Day (IND) is annually celebrated across the globe on May 12 to highlight the importance of nurses in healthcare and to appreciate their work towards healthcare.
The International Nurses Day marks the birth anniversary of Florence Nightingale.
The theme of IND 2021 is Nurses: A Voice to Lead – A vision for future healthcare.
Background:
i.The international Nurse Day was first proposed by Dorothy Sutherland, an officer from the United States Department of Health, Education and Welfare in 1953.
ii.The first international nurses day was observed by the International Council of Nurses (ICN) in 1965.
About International Council of Nurses(ICN):
ICN is a federation of around 130 national nurses associations that represent more than 27 million nurses across the globe.
President– Annette Kennedy
Headquarters– Genève, Switzerland
Founded in– 1899
>>Read Full News