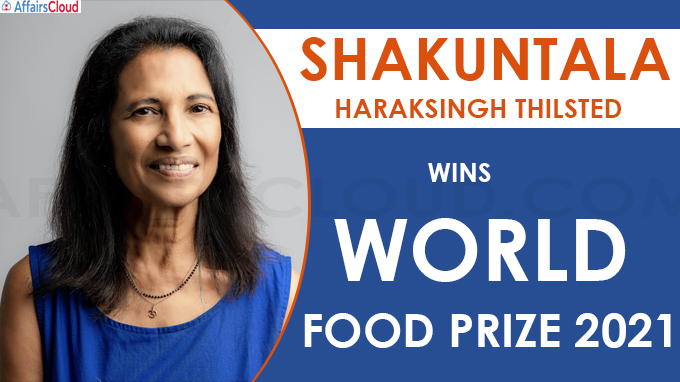 Indian Descent Dr.Shakuntala Haraksingh Thilsted, a native of Trinidad and Tobago and a citizen of Denmark, won the 2021 World Food Prize for her research, insights and innovations in developing holistic, nutrition-sensitive approaches to aquaculture and food systems.She becomes the first woman of Asian heritage to receive this award.

i.Dr Shakuntala Haraksingh Thilsted has brought together the interdisciplinary and international collaborators and drove transformations in aquatic food systems to provide nutrition, a resilient ecosystem and secure livelihood for vulnerable people across the world.

ii.She is currently serving as the Global Lead for Nutrition and Public Health at WorldFish, a global CGIAR (formerly Consultative Group on International Agricultural Research) research center headquartered in Malaysia

iii.She was the first to establish that the commonly consumed small fishes were an important source of micronutrients and fatty acids.

ii.The award is annually presented to recognise the achievement of an individual that advances human development with increased quality, quantity, availability or access to food through innovative interventions within the scope of the food system.

iii.The World Food Prize was created in 1986 with sponsorship by General Foods Corporation.