We are here for you to provide the important Recent and Latest Current Affairs 10 February 2021, which have unique updates of Latest Current Affairs 2021 events from all newspapers such as The Hindu, The Economic Times, PIB, Times of India, PTI, Indian Express, Business Standard and all Government official websites. i.SMTR will serve as a link between Meghamalai WLS and Srivilliputhur WLS and further connect it with Tirunelveli WLS & Kalakkad Mundanthurai Tiger Reserve making it a continuous corridor for conservation of tigers.
ii.Apart from helping in conservation of Tigers, SMTR will also help in rejuvenation of Vaigai river by protecting its origin in the Forests.
iii.Tiger Reserves are declared by NTCA via Wild Life (Protection) Amendment Act, 2006 under the scheme ‘Project Tiger’.
About Tamil Nadu:
Lakes – Kaliveli Lake (Recently in News), Veeranam Lake, Berijam Lake
Tiger Reserves – Anamalai, Kalakad Mundanthurai, Mudumalai, Sathyamangalam
<<Read Full News>> 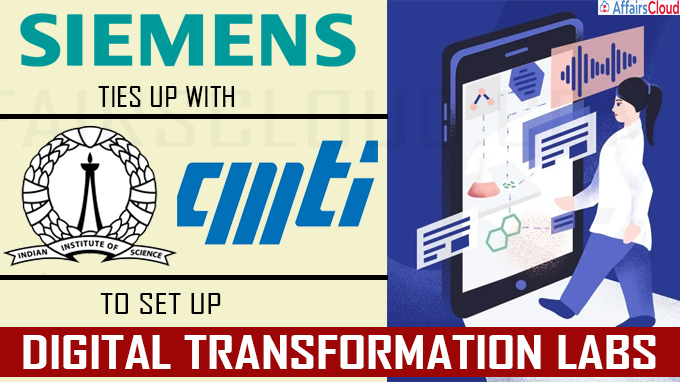 On February 8, 2021, Siemens Ltd (India) signed 2 separate Memorandum of Understanding (MoUs) with Smart Factory, Indian Institute of Science (IISc), Bengaluru & Smart Manufacturing Demo and Development Cell (SMDDC) at Central Manufacturing Technology Institute (CMTI), Bengaluru for the establishment of 1st of its kind Digital Transformation labs. The Agreements were signed for a period of 3 years.
With these agreements, Siemens Ltd aims to support the Smart Advanced Manufacturing and Rapid Transformation Hub (SAMARTH) Udyog initiative of the Ministry of Heavy Industries and Public Enterprises, Government of India.
Objective:

MoD and BEL Signed Contract for Procurement of DR-Tac worth over Rs 1,000 crore 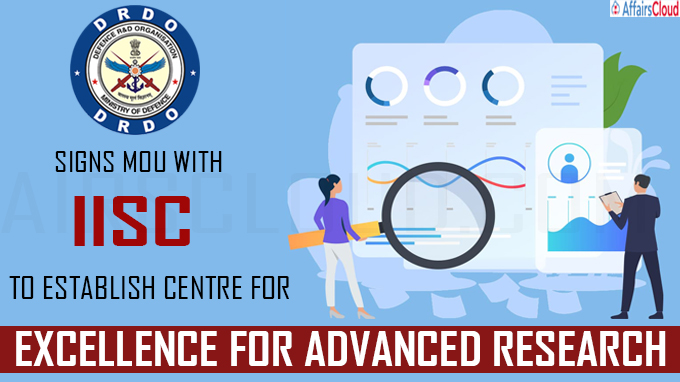 i.The 16th edition of an annual joint military exercise between India and the United States (US), “Yudh Abhyas 20” was initiated as a part of defence cooperation at the Mahajan Field Firing Range (MFFR), near the India-Pakistan border in Rajasthan on February 8, 2021. This 12 days long exercise will culminate on February 21, 2021.
ii.The Indian side is represented by the 11th Battalion of Jammu and Kashmir Rifles, part of the South Western Command while U.S. Army delegation will be represented by the troops of 2nd battalion, 3rd Infantry Regiment of 1-2 Stryker Brigade Combat Team along with respective brigade headquarters.
iii.The US contingent was welcomed by Brigadier Mukesh Bhanwala, Commander of the 170 Infantry Brigade of the Indian Army.
About United States (US):
President– Joseph Robinette Biden Jr.
Capital– Washington, D.C.
Currency– United States Dollar
<<Read Full News>> 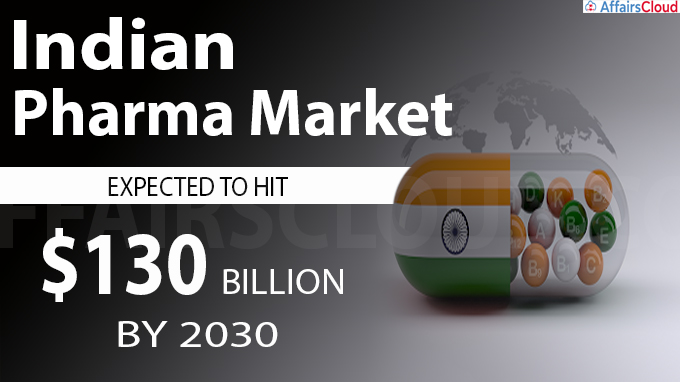 On February 8, 2021 Union Minister for Chemicals and Fertilizers, D V Sadananda Gowda while addressing the Press Conference on the 6th Edition of ‘India Pharma & India Medical Device 2021’ mentioned that the total market size of the Indian Pharma Industry is expected to reach the US $ 130 billion(approximately Rs 9.47 lakh crore) by 2030. He also mentioned that the medical devices industry in India is expected to reach $ 50 billion(approximately Rs 3.67 Lakh crore)  by 2025.
In addition to him, Minister of State for Chemicals and Fertilizers Mansukh Mandaviya also addressed the press conference.
6th Edition of ‘India Pharma & India Medical Device 2021’
General Info: It is  annual program on Pharmaceuticals & Medical Device sector
Scheduled on:  25-26 February & 1-2 March 2021.
Organised by:  The Department of Pharmaceuticals, Ministry of Chemicals & Fertilizers, jointly with The Federation of Indian Chambers of Commerce & Industry(FICCI) & Invest India
Theme: 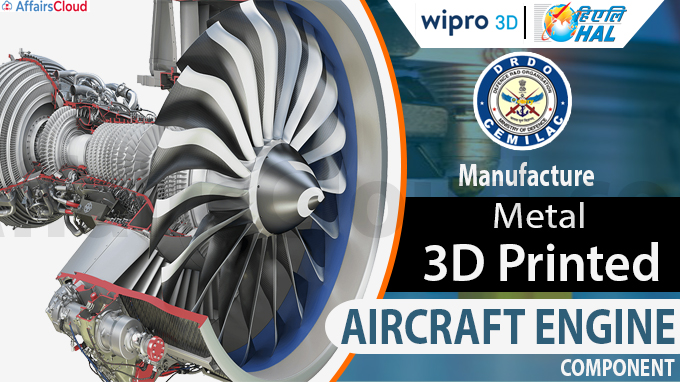 The 13th Edition of the Biennial Military Exercise – ‘Aero India 2021: A Big Step Towards Aatmanirbhar Bharat’ took place at the Yelahanka Air Force Base, Bengaluru, Karnataka from February 3-5, 2021. It was inaugurated by Defence Minister Rajnath Singh.

Targets:
During the Aero India Show 2021, India has set various targets. Some major ones are 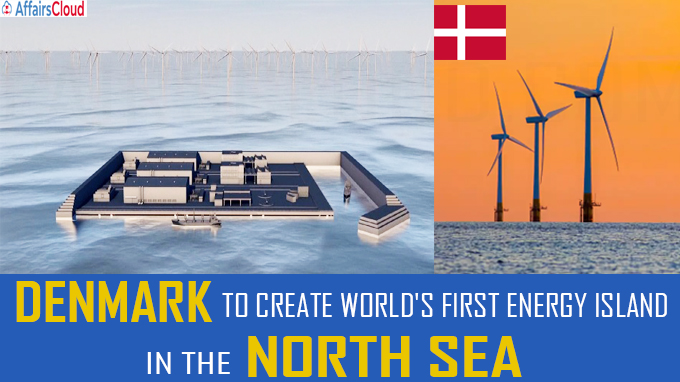 On 4th February 2021, the Government of Denmark approved the plan to build the world’s first energy island (Artificial island) in the North Sea which will produce and store green energy enough to cover the electricity requirement of 3 million households in Europe.
The construction of the island will cost around 210 billion Danish krone (around Rs.2.4 lakh crore).
Energy target of Denmark:
Denmark aims to reduce greenhouse gas emissions by 70% by 2030 from 1990 levels.
Green Energy Island:
i.This is the biggest construction project in the history of Denmark.
ii.The government will hold 51% stake of this island and the remaining 49% will be held by the private sector.
iii.The island will be constructed about 80 kilometers away from the west coast of Denmark and the initial capacity of the surrounding wind turbines will be 3 gigawatts (GW).
iv.The island is expected to commence operation by 2033.
v.The potential of the offshore wind in the North Sea is 180 GW which equals all the coal-fired power plants of Europe.
vi.The Artificial Island will increase offshore wind energy capacity by over 25-fold by the year 2050.
Features:
i.The initial phase of the artificial island will be the size of 18 football fields, which will be linked to the 100’s of offshore wind turbines.
ii.This will provide power to the households and green hydrogen for shipping, aviation, industry and heavy transport.
Benefit:
This green energy island will help the green transition and the reduction of Danish CO2 emissions.
About Denmark:
Prime Minister- Mette Frederiksen
Capital- Copenhagen
Currency- Danish krone i.On February 9, 2021, Reserve Bank of India (RBI) released the Annual Report of the “Ombudsman Schemes of the Reserve Bank for the year 2019-20” i.e. the period covering July 1, 2019 to June 30, 2020. In accordance to the report, the complaints received at Office of Banking Ombudsman (OBOs) recorded an increase of 57.54% Year-on-Year (Y-o-Y) in FY19-20. There were a total of 308,630 complaints in the FY20 as against 195,901 in FY19.
ii.Of these, 85.65% were received electronically i.e. through the online portal CMS and through email, as against 72.19% in the previous year.
iii.Complaints against NBFCs increased by 387%. The ombudsman for NBFCs received a total of 19,432 complaints in the same FY20 as against 3,991 a year earlier.
About Reserve Bank of India (RBI):
Formation– 1 April 1935
Governor– Shaktikanta Das
Headquarters– Mumbai, Maharashtra
Deputy Governors– 4 (Bibhu Prasad Kanungo, Mahesh Kumar Jain, Michael Debabrata Patra, and M Rajeswar Rao)
<<Read Full News>> 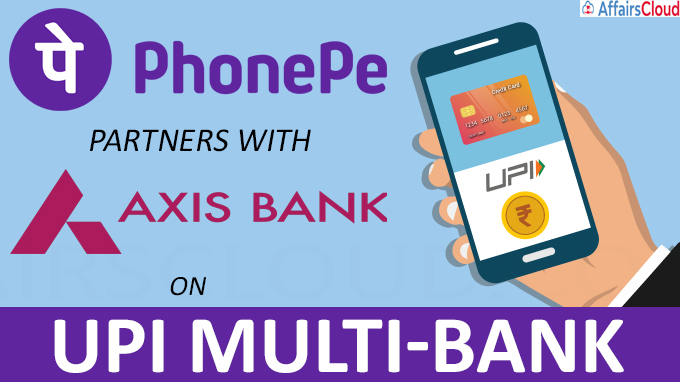 i.The government has  appointed an expert panel to review the objections of industry to the proposed ban on 27 pesticides, that are mentioned as harmful to animals and humans by the government.
ii.The committee is headed by TP Rajendran, former assistant director general of Indian Council of Agricultural Research (ICAR).
iii.These 27 pesticides that are widely used are part of 66 contentious pesticides that are being reviewed for their toxicity.  Already, in 2018, the government had banned 18 of them.
<<Read Full News>>

SpaceX announced its plan for the World’s first all civilian mission to space, the mission is named Inspiration4 in recognition of the 4-person crew to support St. Jude Children’s Research Hospital. The mission commanded by Jared Isaacman, a 37-year-old entrepreneur the founder and CEO of Shift4 Payments and accomplished pilot will be launched from NASA’s Kennedy Space Center in Florida. 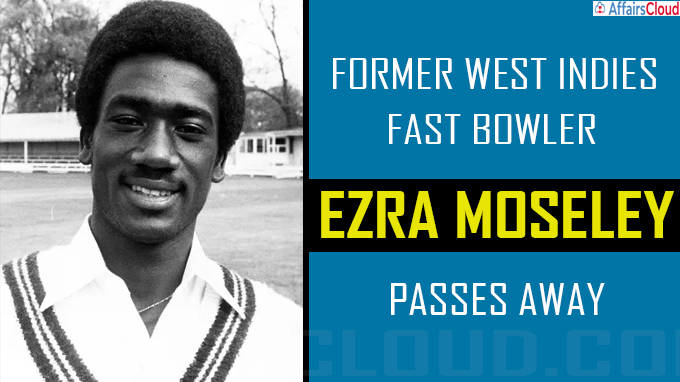 On 6th February 2021, the former West Indies cricketer and fast bowler, Ezra Moseley, the current coach of the Barbados Women’s team passed away at the age of 63 in Barbados after a road accident.  He was born on 5th January 1958 in Barbados.
About Moseley:
i.Moseley made his first class debut in England for Glamorgan and later he joined Barbados.
ii.He played 2 tests in the home series against England in 1990 and has played 9 ODI between 1990 and 1991.
iii.He has played around 76 matches and taken 279 wickets.
Rebel tour to South Africa:
i.Moseley signed on for the controversial West Indies “rebel tour” of South Africa in 1982, earning him a life ban from West Indies cricket.
ii.The life bans on the rebel tourists were lifted in 1989 and Moseley returned to Barbados and became the first and only member of the touring parties to play for the West Indies afterwards.
iii.He played two Tests against England during their 1989–90 tour of the West Indies.
iv.He played for the Eastern Province in South Africa and became a professional in the Lancashire leagues and remained at Glamorgan till 1986.
Coaching career:
i.He became a coach at a school in Bridgetown and contributed to the development of Jason Holder, the Test Captain of West Indies.
ii.He was the assistant coach of the West Indies Women’s team which won the ICC Women’s T20 World Cup in India in 2016. On 5th February 2021, American professional boxer, Leon Spinks, Former heavyweight champion who won the Gold Medal at 1976 Olympics passed away at the age of 67 in Las Vegas, Nevada, USA. He was born on 11th July 1953 in St. Louis, Missouri, USA.
About Leon Spinks:
i.Leon Spinks won the bronze at the 1974 world championship, silver in the 1975 Pan American Games.
ii.He won the gold medal in the light heavyweight at the 1976 Olympics in Montreal against Sixto Soria.
iii.In his 8th professional fight he won the heavyweight championship against Muhmmad Ali in 1978. He later lost the title to Ali in an unapproved rematch.
iv.He won the Frontier Martial-Arts Wrestling world title in 1992 and became the second man after Primo Carnera, to hold the titles in both boxing and wrestling.
v.He has appeared in the 2009 documentary “Facing Ali” by Pete McCormack and shared his experience on fighting against Ali.
vi.He was inducted into the Nevada Boxing Hall of Fame in 2017. 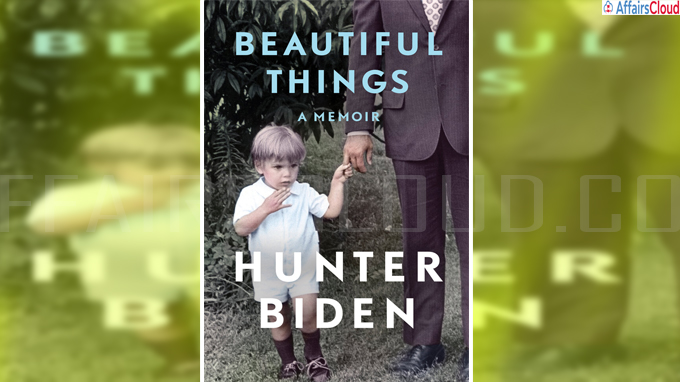 Hunter Biden, son of President Joe Biden has authored the memoir titled “Beautiful Things” which is set to be released in April 2021. The book is published by Gallery Books, an imprint of Simon & Schuster.
About the Book:
i.The book focuses on the life of Hunter Biden’s struggle with substance abuse.
ii.The book aims to provide hope to the people who can relate to the life events of Hunter Biden.
iii.The financial terms of the book, written in collaboration with Hunter and journalist Drew Jubera were not disclosed.
About Hunter Biden:
i.Hunter Biden is a lawyer and former lobbyist who helped in the first impeachment of former President Donald Trump.
ii.He joined the board of Ukrainian gas company Burisma in 2014, his term on the board expired in 2019.
iii.He has also served in the United States Department of Commerce till 2001.

i.On February 5, 2021, West Bengal Chief Minister (CM) Mamata Banerjee presented the state’s annual budget worth Rs 2,99,688 crore (net) for FY2022 stating an increase of 17.21% over 2020. She has presented the budget in place of Finance Minister Amit Mitra who is unwell. The state tax revenue is projected to increase to Rs 75,415.74 crore in FY22.
ii.As per the Budget, Gross state domestic product (GSDP) has increased by 2.7 times, state revenue has increased 2.9 times, state plan expenditure has increased by 7.2 times, social sector expenditure by 5.6 times, agri and allied sector expenditure by 6.1 times and physical infrastructure expenditure by 3.9 times.
iii.West Bengal’s debt to GSDP ratio is estimated to reduce to 34.81 in 2021-22.
iv.It should be noted that the state has allocated the maximum amount (highest) towards panchayat and rural development at Rs 23,983.27 crore.
About West Bengal:
In 2020, West Bengal was impacted by Amphan Cyclone.
Capital– Kolkata
Governor – Jagdeep Dhankhar
<<Read Full News>>