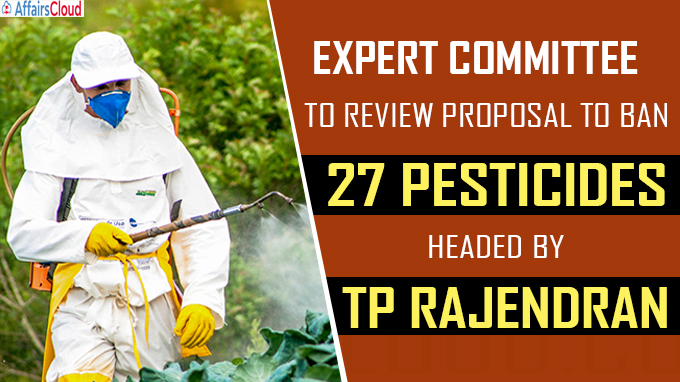 The government has  appointed an expert panel to review the objections of industry to the proposed ban on 27 pesticides, that are mentioned as harmful to animals and humans by the government. The committee is headed by TP Rajendran, former assistant director general of Indian Council of Agricultural Research (ICAR).

In May 2020, The Ministry of Agriculture and Family Welfare has issued the draft Banning of Insecticides Order, 2020 that aimed to ban these 27 pesticides

i.Initially the Govt gave 45 days to the industry and pesticide companies to respond to the proposal

ii.This deadline was later extended to 90 days from the date of notification, after the intervention of Union agriculture minister Narendra Singh Tomar.

iii.Even after 90 days, the matter remained pending and now an expert committee has been formed.

Opinion of the Industry about the Ban

i.Of these 27, the  industry and companies have no much objection if 4 pesticides namely, methomyl, butachlor, dicofol and dinocap are banned.

ii.But they strongly defend the use of the remaining 23 by submitting scientific evidence.

Export will be affected

i.They export pesticides of Rs 23,000 crore to several countries including the US and these 27 pesticides constitute 40% of it.

ii.The pesticide manufacturers  also mention that if ban is implemented the export market will be directly transferred to the Chinese companies.

Besides, the ban will be an additional financial burden on farmers as the  price of these controversial pesticides ranges from Rs 275-450 per liter and their alternatives price is Rs 1500-2000 per liter.

On December 23, 2020 The Department of Science and Technology(DST) under Frontier and Futuristic Technologies (FFT) Division constituted an advisory committee to use futuristic and new age technologies for conservation of Indian heritage conservation, documentation, and digital restoration. The committee will be chaired by Santanu Chaudhury, Director, IIT Jodhpur Rajasthan.