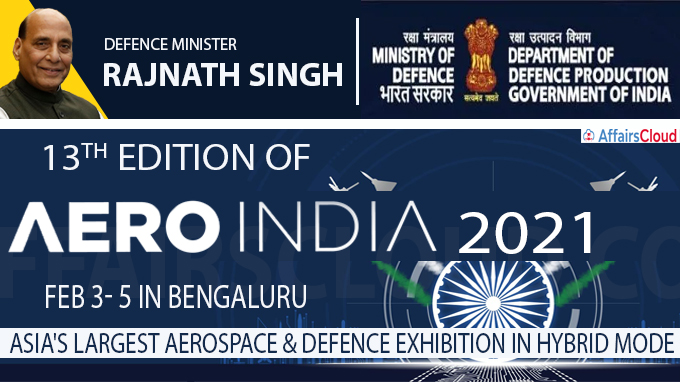 The 13th Edition of the Biennial Military Exercise – ‘Aero India 2021: A Big Step Towards Aatmanirbhar Bharat’ took place at the Yelahanka Air Force Base, Bengaluru, Karnataka from February 3-5, 2021. It was inaugurated by Defence Minister Rajnath Singh.

ii.Rajnath Singh also released a Stamp & a book on journey of Aeronautical Research & Development Board (AR & DB) to commemorate its golden jubilee in Aeronautics.

During the inaugural event, INR 48, 000 Crore Contract for manufacturing of 83 LCA Tejas was handed over to Hindustan Aeronautics Limited (HAL).

Other components of the contract:

Key Points from the Conclave:

Steps taken by India in IOR:

Rajnath stated that India is in the process of developing an overall Maritime Domain Awareness picture in the IOR, which resulted in signing of a Technical Agreement for sharing of ‘White Shipping Information’.

The conclave was followed by 2 seminars

i.The main objective of the platform is to serve as a platform for exchange of ideas and practices in the fields of aerospace domain.

During Aero India 2021, The Indian Navy conducted a seminar on ‘Building Collective Maritime Competence towards Security and Growth for All in the Region (SAGAR)’.

i.During the meeting, both sides agreed to increase bilateral cooperation and training mechanisms between the two Air Forces.

During the discussions, India appreciated Sudan’s recent initiatives such as

‘Start-up Manthan’ was organised by Innovation for Defence Excellence (iDEX).

i.The portal would serve as a platform for sharing data on the requirements, project status and supply needs of both organizations with each other.

ii.It will also ensure Transparency & Swiftness in the processes done by HAL for IAF.

The other functions of the Portal would be to

i.The testing lab will be used for testing equipment for turbulence faced by ships and submarines at higher states.

ii.NETF will be a major boost to realisation of ‘Aatma Nirbhar Bharat’ in the Defence Sector.

During the Aero India Show 2021, India has set various targets. Some major ones are

ii.Other steps taken by India to achieve the ambitious Atmanirbhar Bharat are

Rajnath Singh stated that India is aiming to achieve Domestic Defence Production worth USD 25 Billion & to create an Export Market in India worth USD 5 Billion by 2025.

i.The Defence Minister also stated that the Aero Components Sector in India is expected to double to INR 60, 000 Crore from INR 30, 000 Crore by 2024.

ii.India has set a target to achieve

iii.India is also planning to spend USD 130 Billion on Defence Modernisation in the next 7-8 years with focus on domestic manufacturing.

During the event, DRDO handed over Licensing Agreements for Transfer of Technology (LAToT) for 14 DRDO developed technologies to 20 Industries.

i.HAL & Rolls-Royce have agreed to enhance their partnerships for collaboration in 2 major areas, which are

ii.An MoU was signed between Rolls-Royce and HAL to establish an Authorized Maintenance Centre for Adour Mk871 at HAL.

iii.A Letter of Intent (LoI) was signed by the 2 entities to manufacture Adour Mk871 Engine parts in India.

iv.The agreements will help in enhancing Roll-Royce’s regional service footprint & help India to establish itself as a hub for defence sourcing, assembly and MRO services.

The MoU aims for continuation of cooperation in addressing the needs of the domestic and export markets for defence products and systems.

Airbus, an Aerospace and Defence Company has signed MoU with GMR Group for exploring collaboration opportunities in aviation services, technologies and Innovation.

The state of Karnataka has signed MoUs with 34 Aerospace and Defence Companies as part of its effort to make Karnataka as the aerospace hub for Asia.

BEML signed MoUs with 11 organizations to explore and enhance the business in Defence & Aerospace Sector.

Initially, the DOHS will be manufactured at HAL’s existing facility at Korwa, Uttar Pradesh.