We are here for you to provide the important Recent and Latest Current Affairs 10 April 2021, which have unique updates of Latest Current Affairs 2021 events from all newspapers such as The Hindu, The Economic Times, PIB, Times of India, PTI, Indian Express, Business Standard and all Government official websites. 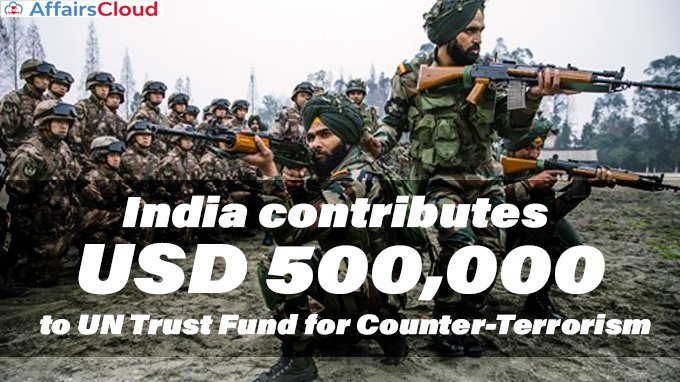 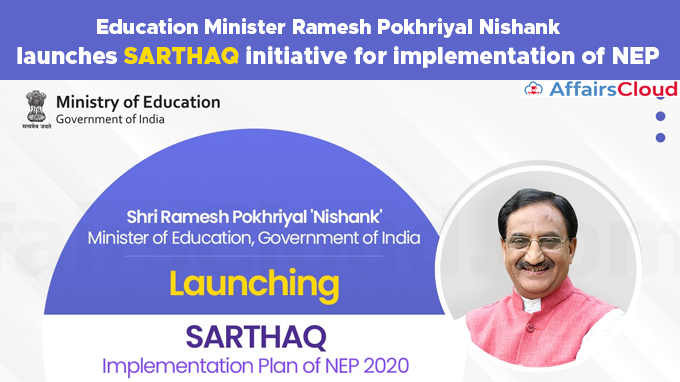 Expected outcomes
The implementation of SARTHAQ is expected to bring many changes in the entire education system, they are

The Ministry of Finance has stated that Banks & other Financial Institutions have sanctioned 28.68 Crore beneficiaries worth INR 14.96 Lakh Crore (as of March 2021) under Pradhan Mantri Mudra Yojana (PMMY) since its launch in 2015.

ii.Objective – To promote entrepreneurship among youths. 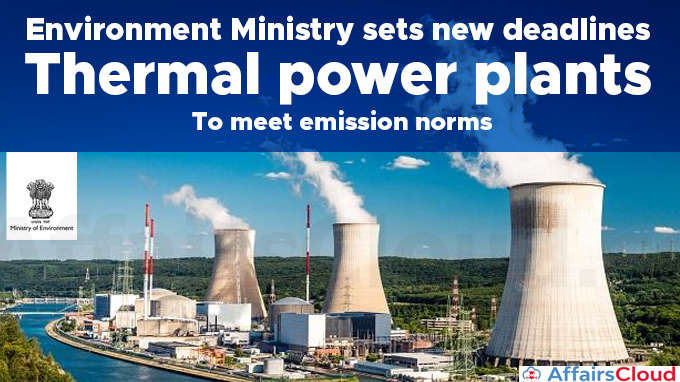 The Ministry of Environment, Forest and Climate Change extends the compliance timeline of Thermal Power plants with reduced penalties for non-compliance. Previously, the Coal based power plants were advised to be in compliance with the emission norms by December 2022 or closure of the plant.
New Guidelines:
i.Thermal Power Plants are categorized under 3 groups:
Category A – Within the 10 km radius of the National Capital region & cities with a million plus population
Category B – 10 km radius of critically polluted areas or non-attainment cities
Category C – All other plants
Note – Pollutants like Sulphates and Nitrates can travel long distances in air.
ii.All Category A power plants should install emission control equipment by December 31, 2022.
iii.Plants earmarked for retirement, shall comply with the emission norms by December 31, 2025.
iv.Cities with more than 10 lakh population to comply with new emission norms by the end of 2022.
About Ministry of Environment, Forest and Climate Change:
Formed – 1985
Union Minister – Prakash Javadekar (Constituency – Maharashtra)
Minister of State – Babul Supriyo (Constituency – Asansol, West Bengal)

The Government of India announced scholarships to 2000 Bangladeshi students, the direct descendants of Muktijoddha or Liberation War-fighters of Bangladesh under the new Muktijoddha Scholarship scheme.
New Muktijoddha Scholarship scheme:
i.This new version scheme was launched in 2017 during Prime Minister Sheikh Hasina’s visit to India and it aims to benefit 10000 Bangladeshi students over a period of 5 years.
ii. Under this scheme, 1000 Higher Secondary students will receive a one-time amount of Tk 20000 and 1000 UG students will receive an amount of Tk  50000 directly into their bank account.
iii.Muktijoddha scholarship scheme was launched in 2006 under which higher secondary students received 10000 Taka(Tk) per year for 2 years and Undergraduate(UG) students received Tk 24000 per year for 4 years.
Fund:
The Government of India has sanctioned Tk 35 crore for both the scheme combined.
At present, the scheme has benefitted around 17082 students and an amount of Tk 37.99 crore has been utilised for this.
PM Modi Announced Swarna Jayanti Scholarship for Bangladeshi Youths:
On 26th March 2021, during the first day of his 2-day visit to Bangladesh, Prime Minister(PM) Narendra Modi announced the Swarna Jayanti scholarship, a research fellowship for youths of Bangladesh which is awarded by the Department of Science and Technology(DST), Ministry of Science and Technology, India.

On 31st March 2021, the National Collateral Management Limited (NCML) signed a Memorandum of Understanding(MoU) with the Agriculture Skill Council of India (ASCI) to provide skill training in the agriculture sector.
Aim:

Skill Training In The Agriculture Sector:
i.This will enable a continuous learning framework that will lead to the training and development of resources in the agriculture industry and the agriculture warehousing industry.
Process:
i.This process is divided into 3 parts with training courses, prior learning and special projects.
ii. According to the National Skill Qualification Framework, ASCI will create occupational standards for various job roles. 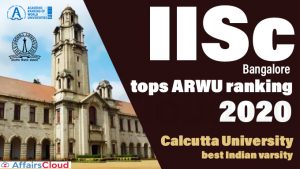 Abdullatif bin Rashid AlZayani, Minister of Foreign Affairs of the Kingdom of Bahrain paid an official visit to India from April 6-8, 2021. The visit of Al Zayani is expected to strengthen the ties & cooperation between the two countries. 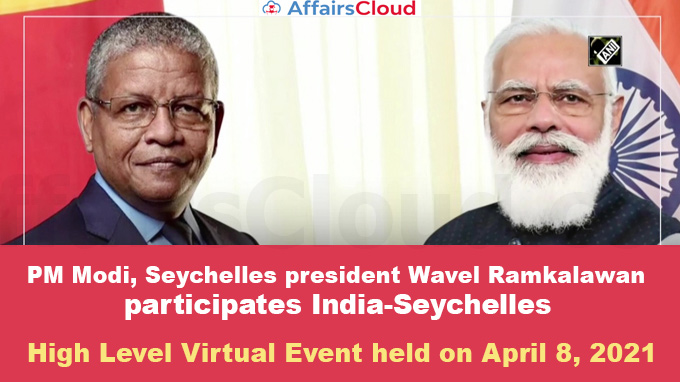 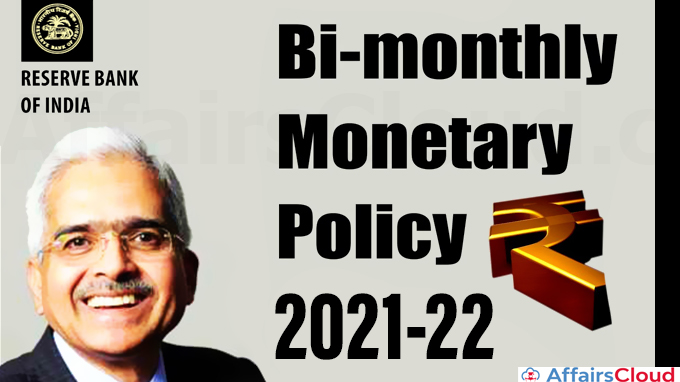 The interest rates were kept unchanged, which are as follows:

-RBI planned to extend SLP of ₹50,000 cr. to AIFIs
To mitigate the impact of the pandemic and to support the economic rival RBI planned to extend fresh lending (Special Liquid Facility) of Rs 50,000 crore for FY22 to All India Financial Institutions (AIFIs) such as the National Bank for Agriculture and Rural Development (NABARD) (Rs 25,000 crore); the Small Industries Development Bank of India (SIDBI) (Rs 15,000 crore); the National Housing Bank (NHB) (Rs 10,000 crore); and the EXIM Bank.
-RBI accepted the WMA recommendation to advance the WMA limit for states by 46%
RBI has accepted the committee’s recommendations to increase the limit of WMA for all states to ₹47,010 crores, against the current limit of ₹32,225 crores (fixed in February 2016), which represents an increase of about 46%.
About Reserve Bank of India (RBI):
Establishment – 1st April 1935
Headquarters – Mumbai, Maharashtra
Governor – Shaktikanta Das
Deputy Governors – Mahesh Kumar Jain, Michael Debabrata Patra, and M Rajeswar Rao (Bibhu Prasad Kanungo retired on April 2, 2021)
>>Read Full News

i.On 8th April, 2021, U GRO Capital in partnership with SBM Bank India launched “GRO Smart Business” credit card for Micro, Small and Medium Enterprises (MSMEs).The Credit Card is powered by RuPay, along with EnKash. These are specially designed for underbanked micro, small and medium enterprises (MSMEs).
ii.Objective – It will empower MSME entrepreneurs by providing financial assistance to solve multiple financial challenges.
iii. These can be availed by the U GRO Capital borrowers against a fixed deposit with SBM Bank India.
About U GRO Capital:
CEO – Abhijit Ghosh
Headquarter – Mumbai, Maharashtra
>>Read Full News

On 7th April 2021, the Securities and Exchange Board of India(SEBI) imposed a Rs.25 crores fine on the promoters of Reliance Industries Limited (RIL) (Mukesh Ambani, Anil Ambani, Nita Ambani, Tina Ambani) for the violation of the takeover code regulations in 2000.

Nethra Kumanan (23 years old) became the 1st Indian woman sailor to qualify for the Olympics under the laser radial category. She will be the 10th Indian to qualify for a sailing event in the Olympics. She secured the place through her performance at the Mussanah Open Championship, a qualifier for the 2020 Tokyo Olympics.

“Akhtari: The Life and Music of Begum Akhtar” a new book to remember about the life and singing experience of great Indian Singer Begum Akhtar or Akhtari Bai Faizabadi.It was edited by Yatindra Mishra and published by HarperCollins India.

About the Book:-This book is a tribute to Begum Akhtar, featuring essays on her life and music, remembrances by those who knew her well, and interviews with the legend herself.

i.Akhtaribai Faizabad or Begum Akhtar was born on October 7, 1914, in Faizabad UttarPradesh and died in 1974. On October 7, 2017, Google dedicated a Doodle profile to her commemorating the 103rd birthday of Begum Akthar.

ii.She was an Indian singer and actress. She is one of the greatest singers of Ghazal, Dadra, and Thumri genres of Hindustani classical music. The Central Reserve Police Force(CRPF) Valour Day is annually observed across India on 9th April to honour the valour of the Martyrs and the bravehearts of the 2 CRPF companies who fought against Pakistan at Sardar Post, Gujarat in 1965.
i.The day is also known as the Shaurya Diwas and 9th April 2021 marks the observance of the 56th CRPF Valour Day.
ii.The day marks the victory of the small contingent of CRPF against the Pakistan army at the Sardar Post, Rann of Kutch, Gujarat on 9th April 1965.
About Central Reserve Police Force(CRPF):
Director-General– Kuldiep Singh
Headquarters– New Delhi
>>Read Full News