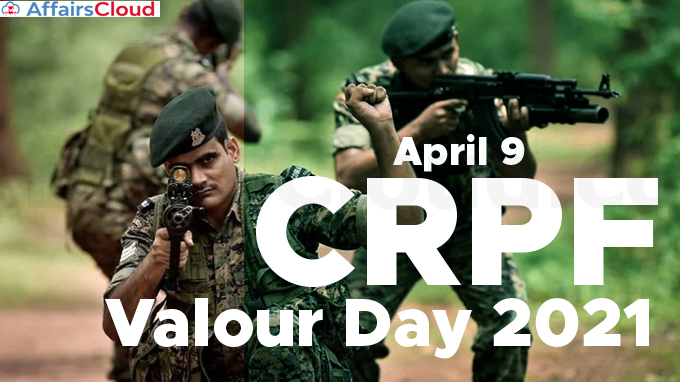 The Central Reserve Police Force(CRPF) Valour Day is annually observed across India on 9th April to honour the valour of the Martyrs and the bravehearts of the 2 CRPF companies who fought against Pakistan at Sardar Post, Gujarat in 1965.

i.The day marks the victory of the small contingent of CRPF against the Pakistan army at the Sardar Post, Rann of Kutch, Gujarat on 9th April 1965.
ii.The CRPF personnel eliminated 34 Pakistani soldiers and captured 4 alive. 6 personnels of CRPF attained martyrdom during the conflict.
iii.This is marked as the one of the best battles that was ever fought in the history of police forces.
iv.As a tribute to the CRPF personnels the 9th April is declared and celebrated as the CRPF Valour Day since 1965.

i.The CRPF came into existence as the Crown Representative’s Police on 27th July 1939.
ii.After Independence the force was renamed as the Central Reserve Police Force(CRPF) on enactment of the CRPF Act on 28th December 1949.