On January 21, 2020, Indian Council for Child Welfare (ICCW), which selects children for the National Bravery Awards every year, has picked 22 children including 10 girls & 12 boys from 12 States for the ICCW National Bravery Awards-2019.
They will receive the award from President of IndiaShri, Ram Nath Kovind on 26th  January 2020 (Republic Day). 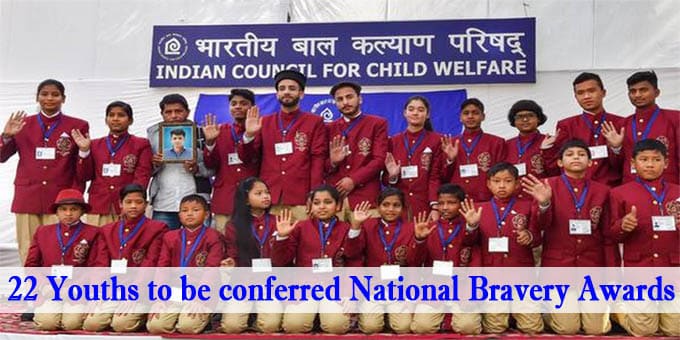 ii.The prestigious Bharat Award will be conferred on Adithya K (15) from Kerala for saving more than 40 lives after a bus they were travelling in caught fire.

iii.Akash Khillare from Aurangabad (Maharashtra) will be getting a bravery award for rescued the life of a 5-year-old girl and her mother after he saw them sinking while on his way to school.

iv.The other recipients are given in the link below,
https://www.newindianexpress.com/nation/2020/jan/21/22-children-selected-for-national-bravery-awards-2092550.html

National Bravery Awards:
These are a set of awards given annually since 1957 by the Union government to children below 16 years of age for their bravery against all odds.
Each awardees will get a medal, a certificate ,cash & also receive financial assistance from philanthropists till their graduation.