On January 22, 2020, According to the ISRO (Indian Space Research Organisation), chairman Dr Kailasavadivoo Sivan, ISRO would launch 2 unmanned missions in December 2020 and June 2021 in view of the launch of India’s first manned spacecraft “Gaganyaan” in December 2021. 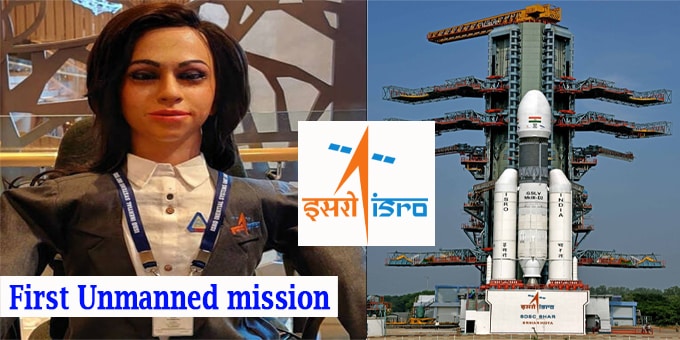 i.He made this announcement during the inaugural session of a symposium on “Human Spaceflight and Exploration – Present Challenges and Future Trends It is also to establish a new space center for “human presence”.

ii.ISRO has started an astronaut training center near Bangaluru, Karnataka to cater to future needs. The Indian Space Agency ISRO is also in talks with NASA(National Aeronautics and Space Administration),an United States-US space agency and other space agencies and enterprises to learn how they can work together on manned spacecraft and learn from their experience.

iii.Along with Gaganyaan, work on the Chandrayaan-3 mission of about 600 crores is also going on. The preparations are underway to launch Chandrayaan-3 in 2021.

Vyommitra: ISRO’s half-humanoid robot set for an unmanned trip into space before Astronauts
The ISRO has prepared women robot ‘Vyom Mitra’(means a friend in Sky) for sending into space under the 1st unmanned Gaganyaan mission.

Vyom Mitra, designed & developed by the ISRO’s  Inertial Systems Unit in Thiruvananthapuram (Kerala) in collboration with Indian Institute of Science (IIsc) Bengaluru, Karnataka, is half-humanoid and its body stops at the torso (the part of the human body where the limbs are attached) and without legs.
The robot can speak 2 languages (Hindi and English) & will be sent in a space capsule at the end of the year 2020 / early 2021 to study the zero-gravity conditions in which the astronauts respond to living outside earth.

i.It has the capability to switch the panel operations, performing Environment Control and Life Support Systems (ECLSS) functions, conversations with the astronauts, recognising them and solving their questions.

ii.The robot can identify & give warnings whenever the environment changes. It will also oversee the human functions required for space before real astronauts take off before August 2022.

i.2-week training of these physicians is very important for the Gaganyaan project, which took three Indian astronauts to space in the year 2022.

ii.A memorandum of understanding (MoU) is expected to be signed when Jean-Yves Le Gall, president of the French space agency CNES (National Centre for Space Studies), arrives in Bangalore,Karnataka.

iii.Indian Air Force physicians with expertise in aviation medicine will be responsible for the health of astronauts during and after the flight. Flight surgeon Brigitte Godard, associated with the European Space Agency, was in India in July and August 2019 to start training physicians and engineers.