On January 28, 2020 the 2019 Global Go To Think Tank Index Report (GGTTI), complete ranking report of the world’s think tank was released by the Think Tanks and Civil Societies Program (TTCSP) at the University of Pennsylvania, United States(US). The index ranked top think tanks from around the world. As per the report India’s Observer Research Foundation (ORF) was ranked at 27th place among 176 global think tanks. The report was topped by Carnegie Endowment for International Peace (CEIP) of US. 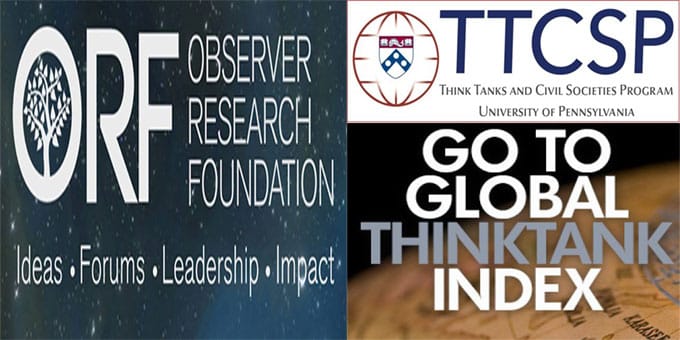 2019 Global Go To Think Tank Index Report:
The report in detail are as follows:

i.ORF: India’s ORF which ranked 27th in 2019 was previously ranked 118th position in 2018. It has also featured at 9th place on the “Think Tank to Watch in 2019″ list and also ranked as the 7th most “Innovative” think tank globally. ORF has been rated among the top 30 global think tanks on “Foreign policy and International Affairs” and “International Economics”

ii.Other Indian think tanks: India’s other think tanks that featured on the list include

iv.Non-Us think tanks: Among the non US think tanks, ORF was ranked 15th in 2019. It moved up by one position from 4th in 2018 to rank 3rd among the Think Tanks in the region China, India, Japan and South Korea.

i.Top 3 list: The CEIP which topped the list was followed by Belgium’s Bruegel and French Institute of International Relations (IFRI) in the 2nd and 3rd place respectively. United Kingdom’s(UK) Chatham House was ranked 6th on the list.

ii.Ranking criteria: The ranking was based on factors such as think tank’s leadership, staff reputation, quality and reputation of the research and analysis produced, ability to recruit and retain elite scholars, analysts, academic performance, reputation, the impact of a think-tank’s research etc. Click here to know more.