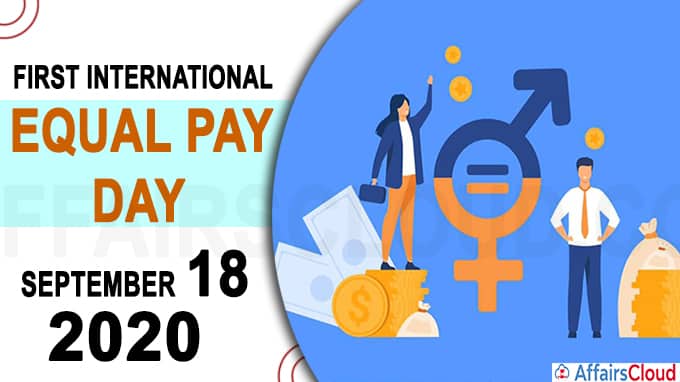 United Nations(UNs) 1st International Equal Pay Day is observed on 18 September 2020 as a step towards eliminating the gender pay gap and to overcome the sexual discrimination against women in the employment sector.

This day promotes equal pay to everyone and the rights to receive equal remuneration for equal work regardless of the gender.

The United Nations General Assembly(UNGA) adopted the resolution A/RES/74/142 on 18th December 2019 and proclaimed 18th September as the International Equal Pay Day to observe every year starting from 2020.

i.Equal Pay International Coalition (EPIC) hosted the virtual global Call to Action to encourage all labour market actors to take steps to ensure that equal pay is at the core of COVID-19 recovery efforts across the globe.

i.EPIC is led by the International Labour Organization(ILO), UN Women and the Organisation for Economic Co-operation and Development (OECD).

ii.The goal of EPIC is to achieve equal pay for women and men at all the sectors.

iii.EPIC supports the government, employers, workers and organisations to ensure progress towards its goal of equal pay.

iv.EPIC is the only multi stakeholder partnership that works towards reducing the gender pay gap at global, regional and national level.

i.Across the globe, women earn around 77 cents for every dollar that men earn for the same amount of work and the gender pay gap is estimated to be at 23%.

iii.The Sustainable Development Goals(SDGs) addressed the need for gender equality and empowerment of women and girls, to ensure no one is left behind.

Points to be noted:- On this first celebration of International Equal Pay Day the ITUC calls for universal ratification and effective implementation of the ILO Equal Remuneration Convention, 1951 (No. 100).