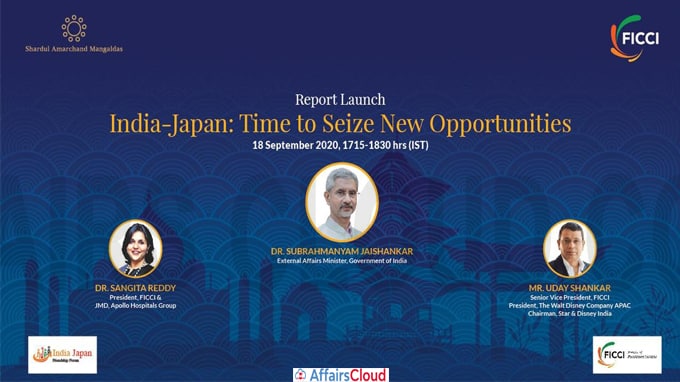 i.External Affairs Minister Jaishankar stated that strategic relationships of India and Japan in the aspects of  defence and security have progressed and Japan has witnessed the increase in economic cooperation.

ii.The Foreign Direct Investment (FDI) from Japan have increased and the number of japan based companies in India have increased.

iii.He mentioned that Japan is the only nation to have an annual summit and 22 dialogues with India.

i.The FICCI-SAM report states that the government of India has assured that various benefits and structural reforms are planned to enable the uninterrupted entry of japanese investors into the Indian Market.

ii.He elaborated the future business opportunities of India and stated that the government will announce more measures to attract more investments.

i.On March 8, 2020, FICCI released the 10th round of FICCI-IBA survey in New Delhi which was conducted by Federation of Indian Chambers of Commerce & Industry (FICCI) and Indian Banks’ Association (IBA) for the period of July to December 2019.

ii.On February 7, 2020, In order to boost business & economy, the Federation of Indian Chambers of Commerce and Industry (FICCI) together with 5 of the biggest industry bodies of Central Asian countries (Kazakhstan, the Kyrgyz Republic, Tajikistan, Turkmenistan and Uzbekistan) launched the India-Central Asia Business council in New Delhi.

About Federation of Indian Chambers of Commerce and Industry(FICCI):

Shardul Amarchand Mangaldas & Co is a full-service Indian law firm and one of the largest law firms in India. The company came into operation after a split between its two managing partners, Amarchand & Mangaldas & Suresh A. Shroff & Co., who headed the Delhi and Mumbai offices separately.

SAM as it is popularly now known is considered as Tier 1 law firm having being ranked amongst the top 3 Law firms in almost all major practice areas. The firm regularly advises some of the largest MNCs, Private Equity Funds and Indian corporate houses.

Before its split, Amarchand Mangaldas was India’s biggest law firm with over 600 lawyers (almost double the size of the other large firms). AMSS as it was then called was established in 1917.