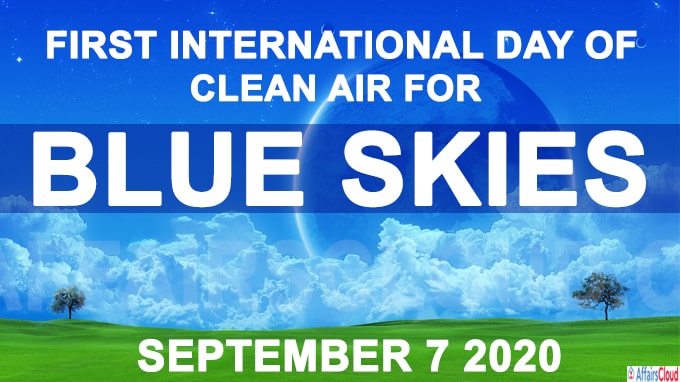 The United Nations'(UN) 1st International Day of Clean Air for Blue Skies is observed on September 7, 2020 across the world to emphasize the need for further efforts to improve air quality, including reducing air pollution, to protect human health.

The day also highlights that air pollution is now the biggest environmental threat to health, but it is preventable.

Aim of the Day

i.To raise public awareness at all levels(individual, community, corporate and government)that clean air is vital for health, productivity, the economy and the environment.

ii.To demonstrate the close link of air quality to other environmental/developmental challenges like,(most and foremost) climate change and the global Sustainable Development Goals.

iv.To unite various international actors who work on this topic, in order to form a strategic alliance to gain momentum for united national, regional and international approaches for effective air quality management

ii.UNGA also invited the United Nations Environment Programme (UNEP) to ease the observance of the day, in collaboration with other relevant organizations.

iii.The Climate and Clean Air Coalition (CCAC) in association with UNEP and the Republic of Korea advocated for the day which led up to the decision.

Prakash Javadekar to Chair a Webinar on the Occasion

The Principal Secretaries of the Urban Development Department and Environment Department of 28 states and 8 Union Territories along with Commissioners of 122 cities as identified in the NCAP programme, will participate in the webinar.

2 Fold Problem- The two-fold problem due to Air pollution is Health impact and Climate impact.

i.It is the only greatest environmental risk to human health and one of the leading avoidable causes of death and disease globally

ii.9 out of every 10 people breathe unclean air around the world.

v.It poses a threat to the economy, food security and the environment.

i.As per the “2019 World Air Quality Report-Region & City PM2.5 Ranking” compiled by IQAir AirVisual, India ranked 5th as the most polluted country in the world and topped in an annual list of cities with the worst air quality in the world.

i.It is to be noted that increases the risks associated with COVID-19.

ii.The lockdowns which were imposed due to pandemic have caused the emissions to fall dramatically, which provides a glimpse of cleaner air in many cities.

iii.Emissions are already rising again, in some places higher than pre-COVID levels.

i.The countries have committed to promote sustainable development policies that support healthy air quality in the context of sustainable cities and human settlements due to the outcome document, entitled “The future we want”, of the United Nations Conference on Sustainable Development .

ii.Union Minority Affairs Minister Mukhtar Abbas Naqvi informed that country observed the 1st Muslim Women Rights Day across India in accordance with the 1st anniversary of the passage of Muslim Women Act (Protetion on Rights on Marriage Act) 2019 on 1st August 2019 which against the act of triple talaq or talaq-e-biddat and help to achieve gender equality for Muslim women as Muslim Women Rights Day.