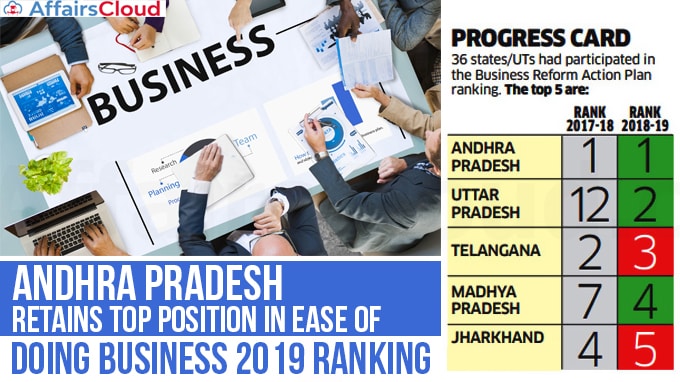 On September 5, 2020, Union Minister of Finance and Corporate Affairs Nirmala Sitharaman has virtually announced the 4th edition of State Business Reform Action Plan (BRAP) Ranking for 2018-19 which was released by Department of Industrial Promotion and Internal Trade (DPIIT), Ministry of commerce and industry. In accordance with that, Andhra Pradesh (AP) topped the Ease of Doing Business (EODB) ranking 2019, followed by Uttar Pradesh (UP) and Telangana at 2nd & 3rd place respectively. Among Union Territories (UTs), Delhi bagged the top spot.

Initiated in 2015, BRAP ranking represent the EODB in the State with increased transparency, efficiency and effectiveness of the government regulatory functions vis-a-vis the business enterprises.During the assessment full weightage was given to the feedback from over 30,000 respondents at the ground level, who gave their opinion about the effectiveness of the reforms.

In accordance with the data of the Ministry of Commerce and Industry, the United States (US) remained India’s top trading partner for the second consecutive fiscal year in 2019-20 as bilateral trade between the US and India stood at USD 88.75 billion as against USD 87.96 billion in 2018-19.