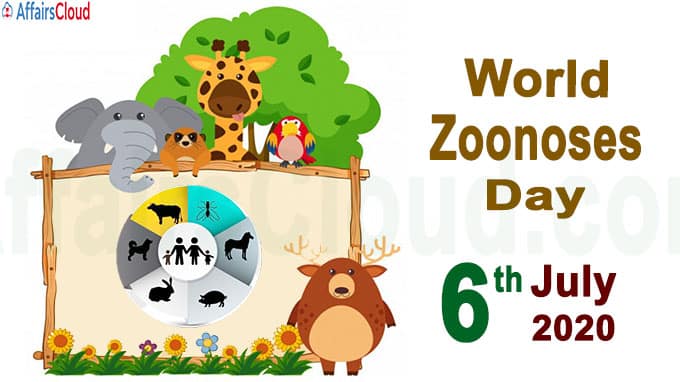 World Zoonoses Day is observed annually on July 6 to raise awareness of the risk of zoonotic diseases among people. The day commemorates French Biologist, Louis Pasteur who administered the first successful vaccine against the Rabies virus in July 6, 1885.

The day emphasizes about Zoonotic disease and problems caused by them. It urges  people to take the right action.The purpose of the day is to show how the disease can be prevented by taking precautionary measures.

i.Zoonosis or Zoonotic disease is an infectious disease transmitted from animals to humans.

ii.It can spread from direct or indirect contact with animals.

iii.One of the common ways for transmission of the disease is through mosquito or tick bites.

Causes– The disease is caused by Bacteria, Viruses, and Parasites

Ways to avoid the disease– Maintaining a good hand hygiene by washing hands with soap and clean water; Wearing dresses which are preventive from mosquitoes, ticks and fleas; Store and handle food safely & cook properly and Avoid bites and scratches from animals

i.Every year 1 in 3 people around the world are affected by this disease. Where, it will be fatal for 2.5 million people.

ii.2 out of every 3 infectious diseases in people are  originated within animals.

About Louis Pasteur:
He is recognized for his discoveries of the principles of vaccination, microbial fermentation and pasteurization. He introduced the 1st vaccine for anthrax.