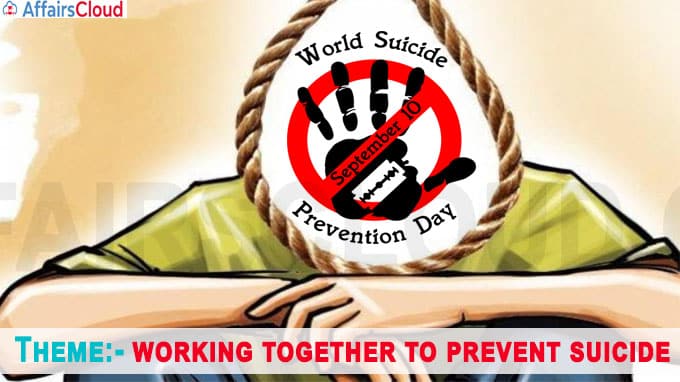 World Suicide Prevention Day(WSPD) is annually observed across the world on 10th of September to raise awareness that the suicide can be prevented and to educate people to reach out for those who need help. The day is organised by International Association for Suicide Prevention (IASP) in collaboration with World Health Organisation (WHO).

The first World Suicide Prevention day was hosted in 2003 by IASP in collaboration with WHO and World Federation for Mental Health (WFMH).

i.The events of 2020 will be celebrated over the virtual platform and social media with #WorldSuicidePreventionDay and #SuicidePrevention due to the ongoing COVID-19 pandemic.

ii.“Cycle around the Globe” campaign from 10th September to 10th October 2020 is launched to raise awareness on the risks of suicide and to fund to suicide prevention activities.

iii.ISAP’s SetpCloser, a World Suicide Prevention Day Awareness film was introduced to encourage connection and the role to play to prevent suicide.

ii.The action plan calls for an expansion of services to promote the greater use of the existing resources and to change the attitude and discrimination towards the isolated people.

i.The data states that more than 80000 people per year die due to suicide which states that around 1 death per every 40 seconds.

ii.The reasons which lead to suicide is a combination of genetic, psychological, social, cultural and other risk factors with any experience of loss or trauma.

iii.More than 300 educational and commemorative activities and events in around 70 counties were reported to IASP.