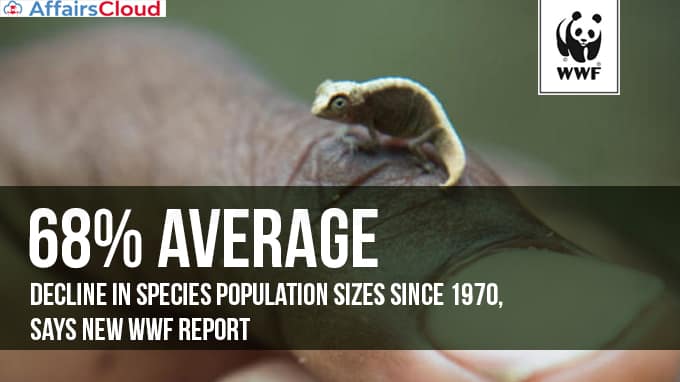 In accordance with the World Wildlife Fund’s (WWF) Living Planet Report 2020, the global vertebrate population declined to an average of 68% between 1970 and 2016. The reasons behind this decline is changes in land and sea use, overexploitation of species, high pollution levels, climate change, habitat loss and degradation, including deforestation, driven by humanity.

-Global freshwater species have also been disproportionally impacted, declining 84% on average. For eg: The Chinese sturgeon found in the famous Yangtze River, whose spawning population has declined 97% between 1982 and 2015 due to damming of the waterway.
-The populations are the worst in Latin America and the Caribbean with an average decline of 94%.

60% of infectious diseases do come from animals, and nearly three-quarters of these are from wild animals.

-As per the report, converting the land use for food production is also one of the main cause of natural loss. About 50% of the world’s habitable land is already used for agriculture – for livestock and as well as for crops that feed people and other cattle animals.

-The report states that humanity’s increasing destruction of nature is having catastrophic impacts not only on wildlife populations but also on human health.