Giving a boost to the rich Sufi culture in India, Prime Minister Modi inaugurated the first World Sufi Forum in New Delhi. It is called the Bain-ul-Aqwami Sufi Conference started with a new ray of hope in New Delhi. 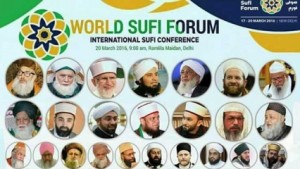 Muslims and mainstream scholars of Islam define Sufism as simply the name for the inner or esoteric dimension of Islam which is supported and complemented by outward or exoteric practices of Islam, such as Islamic law.