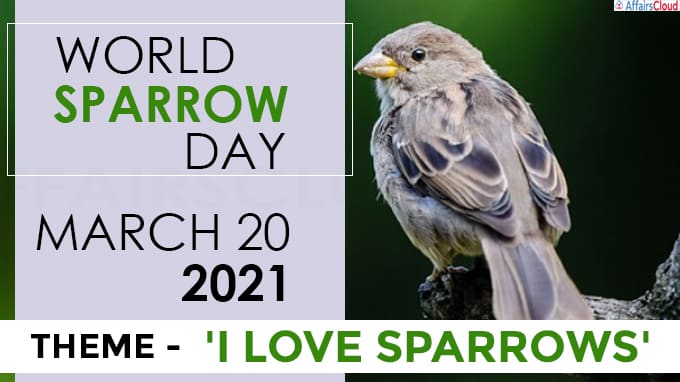 World Sparrow Day is annually observed across the world on 20th March to create awareness and to bring attention to the significance and importance of conservation and protection of the sparrows and other such birds.

The first world sparrow day was observed on 20th March 2010.

The theme of World Sparrow Day is “I Love Sparrows”.

World sparrow day is the initiative of the Nature Forever Society in India in collaboration with the Eco-Sys Action Foundation, France and other national and international organisations across the globe.

To create awareness about house sparrows and other such birds.

The Nature Forever Society was founded by Mohammed Dilawar, an Indian conservationist who worked towards creating awareness on the importance of conservation of house sparrow.

Reason for the decline in Sparrow population:

i.The increasing usage of pesticides and change in the pattern of building are the main factors for the decline in the number of sparrows.

ii.The radiations from the mobile and television towers interferes with the navigation senses of the birds and affects their ability to move around.

i.The house sparrows which are commonly found in the urban cities are listed as least concerned on the IUCN Red List.

ii.The Government of Delhi has declared the house sparrow as the state bird and launched the “Rise of the sparrows” campaign, a conservation movement to save the sparrows.