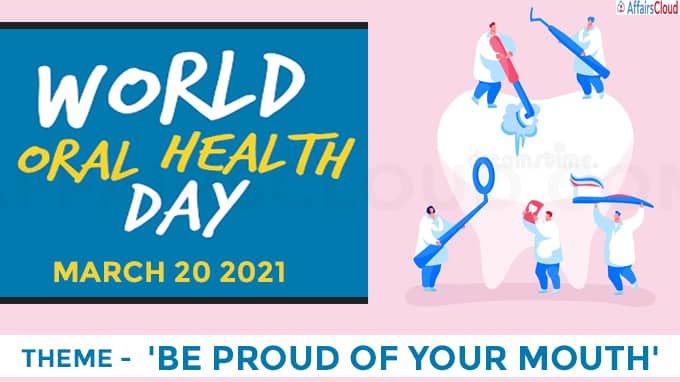 World Oral Health Day is annually observed across the globe on 20th March to promote the importance of oral health and to reduce the problems of oral diseases that affect the individuals, health system and economy.

To empower people across the globe with knowledge and tools to achieve good oral health.

i.The World Oral Health Day is an initiative of the FDI World Dental Federation, an international organisation that unites the world of dentistry with an aim to achieve optimal oral health for everyone.

ii.The World Oral Health Day was first declared in 2007 on 12th September, the birth anniversary of Dr Charles Godon, the founder of FDI.

iii.The campaign became active in 2013 after the date was changed to 20th March to avoid conflicts with FDI World Dental Congress which takes place in September.

The older people should have 20 natural teeth at the end of their lives, the children should have 20 baby teeth and the healthy adults should have a total of 32, this can be mentioned as 3/20 which represents March 20.

i.The National Oral Health Program was created by the Indian Dental Association(IDA) to improve the overall health of India by targeting oral health.

ii.The program was launched during 2014-15 to strengthen the public health facilities of the country for an affordable price.

iii.Under the National Oral health program, the IDA has implemented the Tobacco Intervention Initiative(TII) to eliminate the usage of Tobacco consumption by creating awareness about the adverse effects of Tobacco.

Other efforts for Oral Health:

iii.The Ministry of Health and Family welfare was launched by the IVRS helpline for oral health programmes on World Oral Health Day 2017.