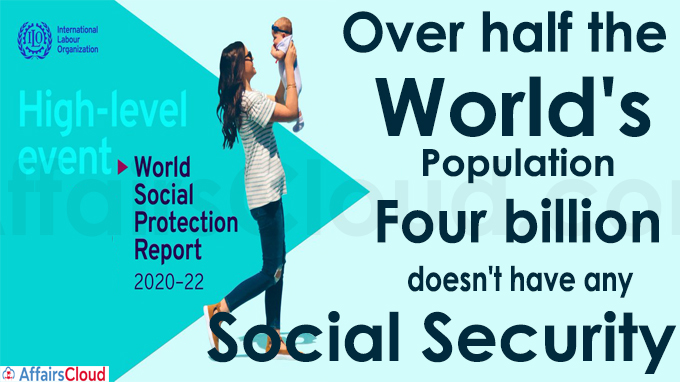 In September 2021, International Labour Organization (ILO) has released its flagship report on social protection named ‘World Social Protection Report 2020-22: Social protection at the crossroads – in pursuit of a better future’.

Key Findings of the report:

i.As of 2020, only 46.9 percent of the global population are effectively covered by at least 1 social protection benefit, while the remaining 53.1 percent (4.1 billion) people obtain no income security at all from their national social protection system.

ii.Government Spending: On average, around 12.8 percent of the gross domestic product (GDP) were spent by the countries on social protection (excluding health).

The different rates of coverage under social protection worldwide are as follows,

Since the start of the COVID-19, the additional spending required to ensure at least minimum social protection for all was increased by ~ 30 percent.

Social Protection: It includes access to health care and income security measures related to old age, unemployment, sickness, disability, work injury, or the loss of the main breadwinner in a family, etc.

According to a new study conducted by the World Health Organization (WHO) and the International Labour Organization (ILO), Long working hours are putting more people at risk of work-related disability and early death due to Stroke & Ischemic Heart Disease. The study is the 1st of its kind on the loss of life and health associated with working long hours.