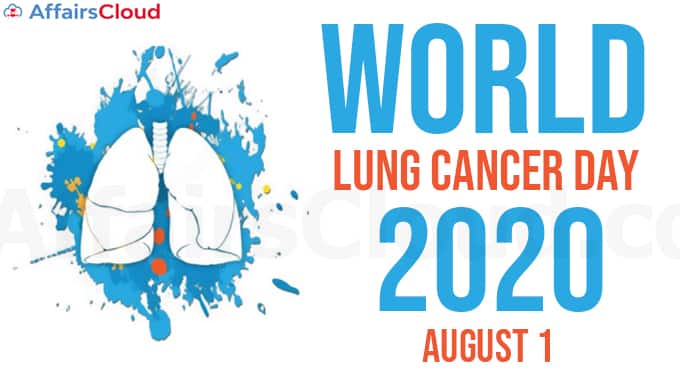 The day highlights the problems that can arise due to lack of adequate research funding.

The day reminds us that lung cancer continues to be one of the most common cancers worldwide, claiming more lives yearly than breast, colon and prostate cancers combined.

i.According to the World Health Organization(WHO) lung cancer is responsible for nearly 1 in 5 cancer deaths.

The five-year cancer survival rate in middle-income countries for all types of lung cancer (19%) is lower than many other leading cancer sites, such as the colon (71%), breast (85%) and prostate (98.9%).

i.Low-income countries(where survival rates are significantly below the average) report only 15% availability of treatment through public health systems.

ii.More than 90% of high-income countries report vital access to care.

The symptoms include change in mucus, chest or back pain, Spitting or coughing up blood, Cough, Difficulty in breathing, Hoarseness or problems of swallowing.

Tests that may be used to diagnose lung cancer include chest x-rays, CT and PET scans, bronchoscopy and needle biopsies

i.Early-stage lung cancer is treated with curative-intent surgery or radiation therapy. Selective patients may benefit from chemotherapy after surgical resection.

iii.Immunotherapy for lung cancer alone, or in combination with conventional treatments, can also  improve outcomes for patients fighting lung cancer

iv.Environmental causes of lung cancer, such as radon and asbestos, can be monitored and reduced.

Note– The advanced stage lung cancer is not curable, many patients may have symptom improvement and survival prolongation by effective treatment.

The IASLC World Conference on Lung Cancer (WCLC) is the largest organisation in the world of its kind that only deals with lung cancer.